Does Reading a Book Before Seeing the Movie Matter? 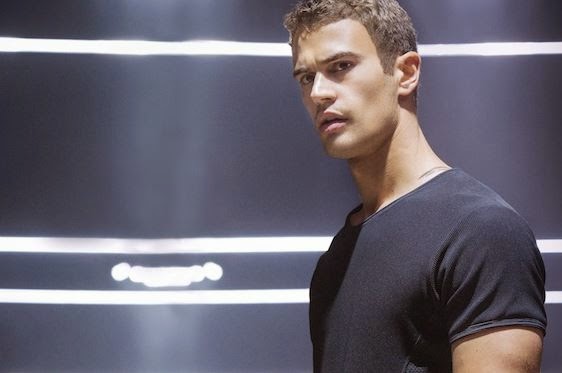 Last Saturday night, my husband and I had a date night. We’d had the babysitter lined up for weeks. And we had a plan, or so we thought.
Dinner. Grand Budapest Hotel. Home.
But, as it turns out, show times for the delightful film we’d planned on seeing didn’t jibe with our babysitter’s timeframe and I wasn’t about to shell out even more moolah to make her stay later.
So, we adjusted. And ended up seeing a huge blockbuster on opening weekend. Which is extremely rare for us, given we tend only to see a handful of movies per year and we usually stumble into the theater when they’re a hair’s breadth away from extinction-til-DVD.
The movie? Divergent.
As in the movie based on book one of a very popular series.
A series I haven’t read.
A series I’ve never been particularly interested in reading, to be honest.
I have plenty on my to-be-read list that I’d put ahead of something bleak and dystopian. Basically, I loved The Hunger Games, but after that I was kind of done thinking about different ways we’d live after the world was pretty much destroyed. Call me an optimist.
However, it ended up being our date night movie of choice because:
1. We were going to a theater with assigned seating and a minimum age of 18, and thus, didn’t have to deal with crowds. (Thank God for Alamo Drafthouse.)
2. The movie was already getting rave reviews by critics and just plain moviegoers alike.
3. Even if it sucked, I’d get to look at Theo James (aka the man who died in Lady Mary’s bed in the first season of Downton Abbey) for two hours, thus the scenery would be pretty. Yes, that’s him above.
So, we went.
And you know what? I really liked it. Great stakes, tension, etc. Though, pretty, pretty Theo James really was the highlight for moi.
That said, I was wondering if it would’ve been different if I’d read the books.
I often try to read the book before I see the movie version (e.g. Hunger Games, as mentioned above), because I want to support the authors and gain some perspective on what was really intended.
Though, I’ve noticed that sometimes this leaves me let down by the movie version. With The Hunger Games, I actually thought the first movie was really tough to follow if you hadn’t read the book. The second movie did much better with this, but I’m not sure if people who hadn’t read the book and saw the first movie would’ve come back to the second movie unless they were just there to ogle Jennifer Lawrence the same way I’d planned on ogling Theo James on Saturday night.
Other times, I’ve only found out the movie was a book after seeing the movie. Actually, this happens a lot. The Oscar darling of 2013, Silver Linings Playbook, is the prime example in my mind. Saw the movie and loved it, then found out it was a book and ordered it.
Would I have liked Silver Linings Playbook so much if I’d read the book first?
I’d like to think so, but it’s impossible to tell.
Do you find reading a book before seeing the film version affects your experience?
Posted by Sarah Henning at 12:00 AM

I rarely attend movies and even more rarely those I have read the book. The movies have to cut so much out from the book it always seems like less.

On those rare occasions when I have read the book, it is a useful exercise to think about what they kept in, what they excised and what they changed and the whys for their decisions.

I usually think the book was better than the movie and I like to read books first so the author's turns and surprises happen as the writer planned. An exception are movies made by Alfred Hitchcock. Some of the books he used are not nearly as well plotted as his films.

Mr. Pamuk! Now I will have to see this!
The success of Twilight and then The Hunger Games has changed the young adult literature world. It used to be that an author wrote a book; then everyone was doing a trilogy; now everyone is aiming for a film franchise. Take the emotional intensity of youth and drop it into a dystopian landscape and you've got lots of drama!
To be fair, Twilight and The Hunger Games were great reads. Divergent the book has gotten rave reviews from my designated YA reader, but I will have to see how she rates the film.
In general, I love comparing film to book, but it has made me see how different the story telling in each field is. My biggest pet peeve is the book character, described as awkward or unattractive, who is then played by a stunning actress in the film version. Maybe with her hair mussed a bit. Always wearing glasses.

I always think the book is better because of the things they leave out or the changes they've made. The one exception was the DVD my sister and a friend watched recently of THE BOOK THIEF. I thought it was extremely well done, but part of that could be because it had been three years since I'd read the book so although I remembered most of it, I wasn't as much aware of what was left out. My sister, who had just finished it recently thought they'd done a good job of filming it, too.

With rare exceptions, I like the book better. But in some cases, the movie is so powerful (I'm thinking the early Harry Potter movies here) the experience is different, but no less enjoyable. And in a few cases, a movie has been redone as a book, and in that case, usually I like the movie better.

I like comparing books with movies to see what was changed, added, or cut. Sometimes I'll print out a script to compare the dialogue from the movie with the book. It's also fun to read a short story that became the basis for a movie.

Normally, I'd say yes and to the film's detriment since most books are better than the film. However, I hadn't read The Help and saw the movie. Much to my surprise, a friend who had read the book said that the movie was better--so you just never know.

There are few books that I read that are made into movies. I will check out One For The Money, (Janet Evanovich) to see if the film captures the tension of the book. Snow Falling on Cedar, the movie version, couldn't capture the book. Cannery Row, which was made thirty years ago or so followed the book. I thought Nick Nolte and Debra Winger did a superb job. Loved it.

Oooh, I want to see THE BOOK THIEF! It's on my very long list of stuff we are going to watch eventually (years from now?). And I completely agree about Harry Potter, those movies were much more vivid than anything my mind came up with when I read those books. I think that's my fault, not J.K.'s.
Two movies I thought that did a bad job of living up to the books? DA VINCI CODE and JACK REACHER. Anyone else feel that way?