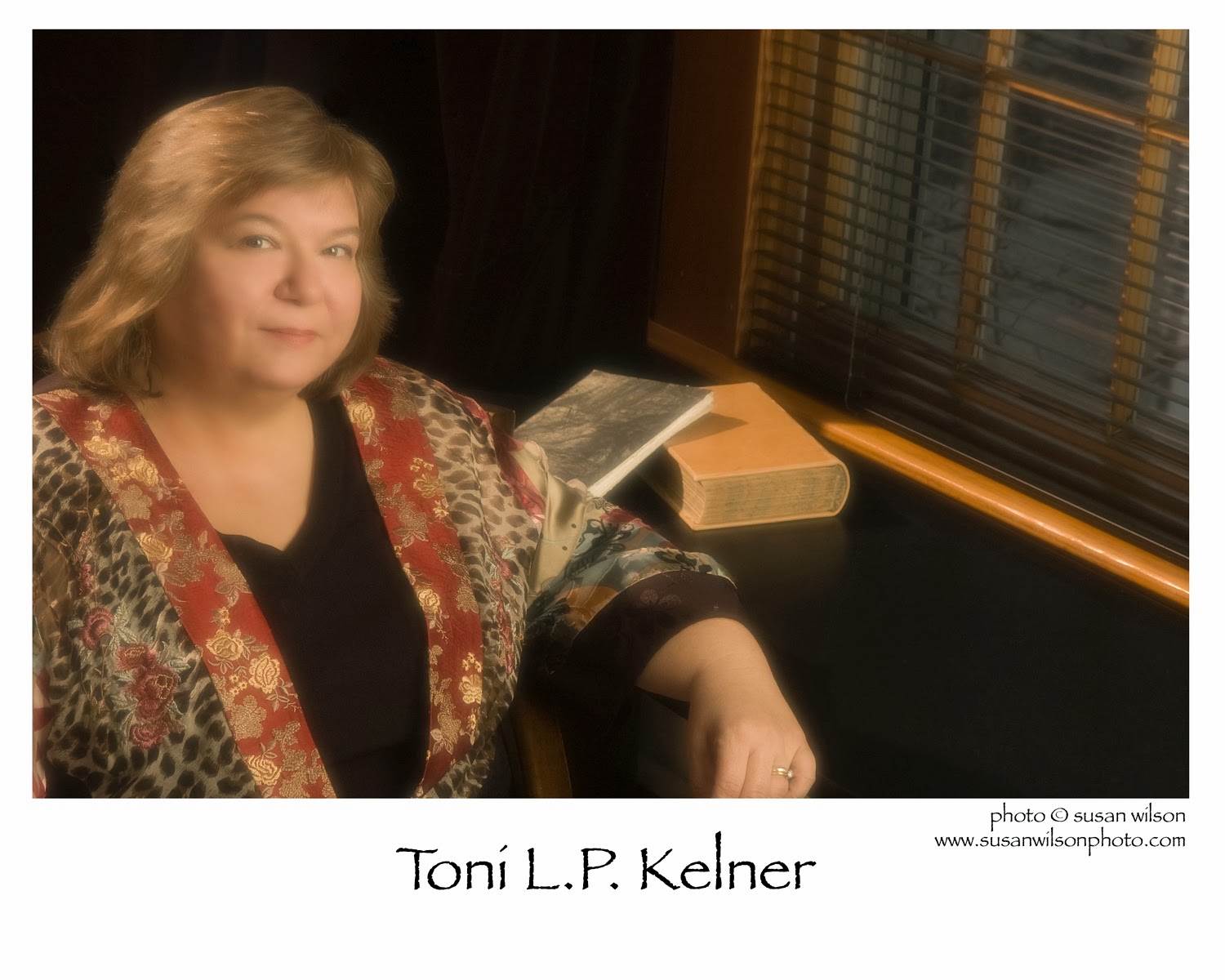 Previously, Toni has been with us on WWK in an interview about her new novel, written as Leigh Perry, A Skeleton in the Family, and also with her own blog message about her new endeavors. Her Leigh Perry website is: http://leighperryauthor.com/

As an author of short stories, Toni has been nominated for the Agatha, Anthony, Derringer, and Macavity awards, and has won the Agatha award for “Sleeping With the Plush” published in May 2006 in Alfred Hitchcock Mystery Magazine. Charlaine Harris is her co-editor on five anthologies, featuring both the mysterious and paranormal. They have a sixth anthology due out next year.

In addition to her short story anthologies, Toni L.P. Kelner has written the Laura Fleming mysteries and “Where are they now?” novels. She has been nominated for RT BookClub awards and received an RT BookClub Career Achievement Award. Toni has a B.A. in English. Her website is http://www.tonilpkelner.com/
Toni, thank you for being with us and taking the time to answer the survey questions.
How has being part of a short story writing community influenced your writing?
If you mean the Short Mystery Fiction Society, I don't think it's affected my writing per se, but it sure has made me aware of the challenges facing short story writers.

It's funny, back when I first started writing, all the writing books I read said to start with short stories to build a reputation, then move on to novels. (Advice that did not work for me, by the way.) Now I think it's easier to sell short stories when you've published a novel first!

When writing for a themed anthology, I always try to do something that nobody else would. So when I was trying to sell to Midnight Louie's Pet Detectives, edited by Carole Nelson Douglas, I wrote an elephant story. When I was writing a story for Jeffrey Marks's Criminal Appetites, which required a recipe, I wrote about marijuana brownies. And when I was trying to write for an MWA courtroom drama anthology, I tried two stories: a trial aboard a pirate ship and a mock trial at a high school. (For what it's worth, I sold the stories to Carole and Jeff, but didn't make it into the MWA anthology, though I sold those stories elsewhere.)

As for selecting, the anthologies I've co-edited with Charlaine Harris have all been invitation only. So we're selecting writers we know can write good stories. We aren't terribly systematic in how we put together a list of people to invite. We just invite people whose work we like and who we think we can work with. Our contract does say that we need a certain number of big-name authors per book, but otherwise, it's our choice. We pull from mystery, thriller, science fiction, fantasy, urban fantasy, paranormal romance, even comics. Charlaine is extremely well-read in all those genres, and that really helps.

It's a matter of scope: an instant in a person's life, not a year; one locked room, not a town; a few characters, not an extended family; a gimmick that makes a great "gotcha" moment for a story, which wouldn't carry a whole novel. And often, I get an idea that could be a novel and melt it down to the best part to make a short story. Plus if it's a historical or anything that would require tons of research, I'll do it as short fiction so I don't have to do that much work. I'm kind of lazy.

If you'd asked me a month ago, I'd have said no, but I saw that a publisher I admire was looking for flash fiction. So I got an idea one night and wrote one. Then I checked with the publisher and found out one discouraging fact and one deal-breaker. It was to be online only, which I didn't love but would have accepted, and they weren't paying, which was the deal-breaker. I still have the story, and a market in mind, but I need to read it over a couple of more times to polish it.

For fully realized characters? Maybe three or four. You can mention a lot more, of course, but they're going to be background characters.

Since high school. I have this gimmicky short story I wrote and submitted to Isaac Asimov's Science Fiction Magazine back when George Scithers was the editor. It came back with my very first rejection slip, but it was a good one--he really encouraged me. And yes, I still have that slip somewhere around here.

The good part is that with electronic publishing, there are some interesting markets out there. Also short stories, though not the entree into the field my old writing books promised, are excellent for promotion. I've had stories reviewed by readers who add, "I can't wait to check out her books," and I was approached by an Italian publisher purely because of a short story in Alfred Hitchcock Mystery Magazine. (In fact, it was one of the ones rejected for the MWA anthology I mentioned in Question #2.)

The bad are (1) readers who flat out refuse to read a short story because it's short, (2) so many markets that expect me to write for free, (3) so few markets that pay decently.

They are so much FUN! I can try things I'd never try in a novel. Pirates, elephants, noir, PI, male POV, carney lingo... I can run wild.

The ending. Please, give your story one. I read short stories for a contest a few years back, and despaired at how many stories just stopped or dwindled. Something has to happen. In best cases, the main character affects change or changes himself or herself, but I'll settle for a bad joke if I have to. I need a payoff, darn it!

Again, thanks for joining us and providing us with such terrific insight, Toni. Best wishes for your continuing success.

Great interview. I think it is important that we stretch ourselves as writers. Doing something different only improves our skills at doing what we normally do. Short fic is lean and mean. When long fic is, it's wonderful.

I liked what you had to say, Toni. I wrote novels before starting on short stories and find them great fun and a good way to stretch the imagination. I'm still writing my books, but love taking time out for a short, too.l

What a great description of just what a short story is. Thanks Toni

Great interview. I love Toni's works and think her "Kids Today" is one of the best short stories I have ever read.

I agree with you about endings. I've read many that just trail off, and I've wondered why I bothered to read it. Some writers minds work differently than others, but if the ending doesn't work, what's the point of the story? Maybe that is black and white thinking, not something I'm known for, but I feel strongly about endings.

Thanks for coming to WWK, Toni.

I second your comments, Toni, and E.B.'s about endings. There has to be one! I don't prefer vague, that's for sure.

Thanks for coming by, Toni!

I agree, Toni, I need an ending, darn it! Thanks for sharing your thoughts today.

Toni, thanks for taking the time to answer our survey questions and give us such good advice. Best wishes to you and Leigh Perry and Sid and Georgia and A Skeleton in the Family!

I love this series! And this is a very good addition. It's given me such good perspectives on writing short stories. I used to write more of them than I do now, and it's encouraging me to get back into it.

Thanks so much. That's wonderful to hear. Good luck with your writing.

Thanks, folks. But if y'all keep being so nice, you're going to have to change the title from Writers Who Kill to Writers Who Hug. Just saying!