On today's Salad Bowl Saturday, we welcome Hank Phillippi Ryan, who took time from her fabulous current book tour to join us today as a guest blogger. I first met Hank online through the Guppy chapter of Sisters in Crime. She was kind enough to provide a marvelous blurb for my debut novel. I finally got to meet and thank her in person at Malice Domestic. If you don't know Hank, I'm delighted to introduce you. If you do know Hank, you're in for a glimpse of her writing life.

Can’t they just be—badly hurt, and then, reveal the truth, and then, get better and go to prison?

Okay, then, the question is—who do you kill? And why? I so admire George RR Martin—do you read or watch Game of Thrones? He’ll kill ANYONE, shockingly so, and it’s moment after moment of gasping “you’re KIDDING me!” in his novels.  So I try to be brave, as he is, and go ahead and do it.

But you can’t just kill someone (and you can quote me here) to keep the story moving along. No matter who they are, it has to matter, right? 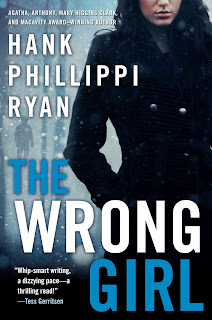 So one day last summer, I was in the midst of THE WRONG GIRL and I was trying decide whether someone should die.

I sat at my computer, staring at the cursor (you know why they call it a cursor, right?) and I heard a little rustling noise behind me. My nine year old grandson, Eli, was standing in the door way of my study.

Hey sweetheart, I said. What’s up?

“I’m very interested in what you’re doing, Grammy,” he said. (This is how he talks.)

My dilemma. How do you tell a nine year old “I’m trying to figure out whether to kill someone”?

“I’m trying to figure out how to kill someone,”  I said.

Eli thought about this for a moment. “It is a good person?”

Then they should live, he said.

“True,” Eli said. (He’s a big reader, and awesome at video games.) “So why don’t you make them have a narrow escape?”

“Good idea,” I said. Thinking about this. “But you know, a narrow escape is kind of a cheap shot. You put in a lot of suspense, but then, no. You pull the punch. Seems—unfair you know? Phony.”

Eli nodded, understanding that. He thought for a bit, shifting from one leg to the other (how are their legs so skinny but their shoes so huge?) And then he said, “Wellllll…”

“Yeah?” (I’ll take help from anyone, you know. If you’re writing, who cares who has the good idea, right?)

“Well,” Eli said. “Maybe they have to sacrifice something to get away?”

I will pause now, while you gasp in admiration.

The rest of the scene flew from my fingers. You know how it goes when it’s working!

And you will see, now, in the acknowledgements of THE WRONG GIRL, a nod to my grandson “who had the great idea.”

It’s all about balance, right? And motivation, and choices and conflict. A narrow escape by chance and luck and coincidence and for the author’s convenience?

A narrow escape—when the decision has to be made to save yourself OR the critical thing?

Ah. Now we have a story.

And Eli, now ten, has asked me to mention he is available for plot consultation if you need him.

Writers, do you know who you’re killing at the beginning of the book? Readers, do you like to be surprised at an unexpected death?

And let me ask you,.where else could you discuss stuff  like this?

Thank you so much for inviting me! (And let me know when you recognize the scene I’m talking about in THE WRONG GIRL!) 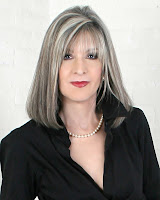 HANK PHILLIPPI RYAN is the on-air investigative reporter for Boston’s NBC affiliate. She’s won 30 EMMYs, 12 Edward R. Murrow awards and dozens of other honors for her ground-breaking journalism. A bestselling author of six mystery novels, Ryan has won multiple prestigious awards for her crime fiction: the Agatha, Anthony, Macavity, and most recently, for THE OTHER WOMAN, the coveted Mary Higgins Clark Award. National reviews call her a "master at crafting suspenseful mysteries" and "a superb and gifted storyteller." Her newest thriller, THE WRONG GIRL, is dubbed "Another winner" in the Booklist starred review. She’s on the national board of directors of Mystery Writers of America and currently president of national Sisters in Crime.


On Twitter at  @hank_phillippi
Posted by Jim Jackson at 12:00 AM

Thanks for the interview, Hank.

I'm not entireley sure, though, that sending characters to prison for an extended period is a better alternative than killing them off, from the character's point of view.

So good to have you here, Hank, and I love your grandson's advice. He sounds like a gem of a kid.

I can't kill decent nice people unless they have other problems that make it not quite as bad. Usually, I make my victims not very nice, but my murderer someone who seems decent and nice, but there is that something that makes them feel they have no other choice.

I just got THE WRONG GIRL in the mail yesterday, Hank, and can't wait to read it - as soon as I finish my two book club books for this month.

Hank, I always think twice before I kill someone. It's not that I care. I just hate cleaning up the mess afterward and I'm running out of places to hide the bodies.

Wait a minute. Are we talking about writing or real life?

Oh, well. Please tell Eli he can come and consult with me any time.

I usually kill off one nice person, then one not-as-nice person in each book. The one I just completed killed off two not-as-nice folks.

I'm starting to think maybe it's worse to kill off the not-as-nice. They're not quite villainous, they're redeemable folks, but I don't give them a chance to change their ways.

Eli is wonderfully perceptive. I predict he'll go far with anything he decides to pursue. I can't wait to read The Wrong Girl and "his" scene. Best wishes to you both!

Thanks for visiting, Hank. Sometimes author's illustrate the long term effects of a killing. That seems very effective to me.

Hi Hank,
Eli sounds like a natural - I'll be looking for his novel in ten years!
I still feel bad about the victim in my work-in-progress. He's a wonderful guy, an old fashioned gentleman who sees the best in people, which makes it all the more necessary to nail the killer!
Thank you for stopping by,
Shari

Hey all..thank you so much for inviting me! Yes, ELi is such a gem.

I had an editor tell me once she was always looking for writers who treated a victim like a real person--that the consequences of the death were discussed--Warren, exactly as you say.

And KM--yeah, true, prison is not such a good solution.

Off to a speech in Seattle! More later..

I'm late to the party, but welcome, Hank, to WWK. (I taught two workshops and had a family thing in the evening. *sigh*)

Please tell Eli that I'd love to have him visit me in KC with his great brain anytime he'd like. Do his parents know you're turning him into a writer?

Love you and your books, Hank! Thanks for joining us. xoxo