Did I Do That Already?

Today on Salad Bowl Saturday I have the pleasure of introducing a debut author, Leigh Perry. Well, that's a bit of a cheat, but if J.K. Rowling can debut as Robert Galbraith then Toni L.P. Kelner can surely adopt a new persona. But even though it's a new genre (explaining the pseudonym) it's still Toni writing and that leads to a problem that she'll describe below.

But there is one writer I have to compete with every time I start a new story or novel:

You see, I just passed my twentieth anniversary as a mystery writer. Yes, Leigh Perry is a new author, but before I was Leigh, I was Toni L.P. Kelner. Over the past two decades Toni has published twelve novels--eight in the Laura Fleming series and three in the “Where are they now?” series--and a couple of dozen short stories. Frankly, I don’t remember every detail of every book or story, so I live in fear that I’ll repeat myself, either in plot or word choice or just in types of characters. 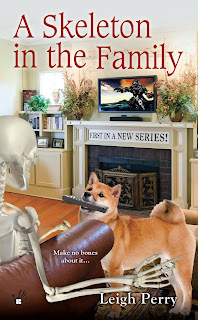 Except that Sid doesn’t work alone. He needs connections. (Skeletons are all about connections. The leg bone’s connected to the knee bone, the knee bone’s connected to the thigh bone, and so on.) Sid’s best friend is Georgia, and it was in creating her that I nearly fell into the rerun trap. When I pitched the series to my editor, the magnificent Ginjer Buchanan, I described Georgia as a twenty-ish single woman. The problem is, I’ve done any number of twenty-ish single women over the years. Fortunately Ginjer knew that, too, and suggested that I write about a single mother with a teenaged daughter instead. That was something I’d never done! Another bullet dodged! I put Georgia in academia, too, because I’d never done that. (Okay, in my Laura Fleming books the husband was in academia, but that’s not the same thing. I hope.)

Only I still had to write about the murder, what with murders being pretty important in murder mysteries. Exotic murder methods aren’t a big deal for me, so a simple stabbing was fine, but I do try to have a different motive each time. That meant I had to go back through a whole lot of murder motives. I’d had characters commit murder to hide a false identity, as a tax dodge, to avoid building codes, to hide theft, for revenge, a couple of serial killers, to hide an old secret, as a Christmas present... Well, I don’t want to tell you what I came up with for this book because that would spoil the ending of Sid’s first adventure, but I will say that it wasn’t any of those. And the denouement was something that could not have happened with any other character than Sid.

Of course there are always going to be some kinds of repetition because whether I call myself Leigh or Toni it’s always the same ole’ me writing the books. My series characters tend to be white women, because I have over fifty years of research into being a white woman. I do vary with short stories, at least, where I’ve written men, pirates, vampires, werewolves, zombie raisers, carnies. (Admittedly some of those were white women werewolves and zombie raisers, but still, that counts as diversity.) My characters tend to consult the internet, which I do myself pretty much every day. (I learned how to gather information online via an online article. It was very zen.) There’s a certain amount of humor, because that’s just the way I roll. (Besides, I can’t imagine anybody having a skeleton as a best friend without making a whole lot of jokes. The bone jokes alone are comedy gold!) I really hope all that falls under the heading of motif and theme, or even style, and not she keeps writing the same story over and over again.

To keep up with Leigh's happenings, check her website http://www.leighperryauthor.com/
Posted by Jim Jackson at 12:00 AM

I don't have twenty years in, but I find myself very thankful as I work on the 4th Seamus McCree mystery that I have kept reasonable records of my characters.

I do find myself doing quick global searches on a key word or phrase to see if I've had a character tell a particular joke or phrase something a particular way. I can get away with that with only three full manuscripts to scan; but I can see the problem will only get worse as my memory becomes less reliable.

If any of us goofs, some astute reader will catch it and let us know. Hopefully they will be forgiving as long as we don't become like old uncle George who tells the same joke every time we're together.

Best of luck with Sid and the new series.

The new series sounds delightful! And I'm sure you bring a freshness to each character and situatin, even if there is some similarity to other characters and situations. In the end, all good stories have similarities with other good stories.

Best of luck (although I know it's really more hard work involved) with your new series!

What an interesting idea for a character. It sounds like a hoot.

I think this will be a great series, Toni/Leigh, and I can't wait to read it. I've written it down for when I go shopping on Amazon.

What a clever and fun character! Best of luck with Sid and the new series.

Your new book sounds like my type of humor; I can hardly wait to read it.