CELEBRATING WITH FAMILY, FRIENDS, & A GIVEAWAY!

by Korina Moss
I can’t believe it’s been over two months since the release of Cheddar Off Dead. A hectic yet wonderful whirlwind of activity surrounded my first Launch Day, culminating in a book party thrown by my family. Except for the date, all the details were kept top secret from me. My son and I arrived from Connecticut and thought we’d stepped into my fictional town of Yarrow Glen in the Sonoma Valley. (In actuality, it was my sister’s backyard in upstate New York.) A skull-decorated faux cheddar wheel with a large knife sticking out of it mimicked my book cover, and the cake looked like a real book. Even Loretta, my protagonist Willa’s flamboyant fish, made an appearance (in the form of my niece’s fish). 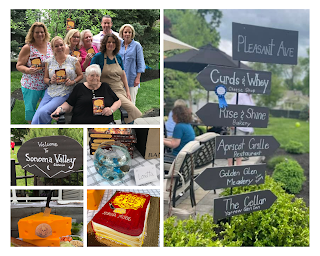 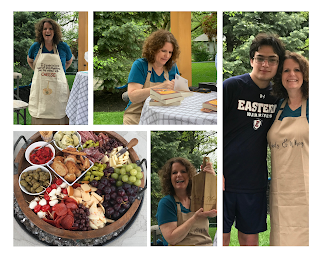 The wine flowed, and everyone partook in gorgeous charcuterie boards and wonderful cheeseboard pairings. I happily signed books and met some new readers. I received some thoughtful gifts, including an apron and a cheeseboard with the name of Willa’s cheese shop, Curds & Whey. One of my sisters made me another apron quoting Willa: “I firmly believe most of life’s problems can be solved with cheese.” It was a fabulous day of celebration that I’ll never forget. 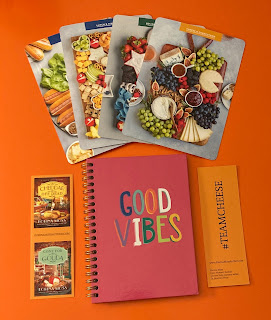 Speaking of celebrations, June is my birthday month, so I want to celebrate it by giving back to my most loyal readers. I’m holding a Subscriber Gratitude Giveaway. The giveaway will include four summer cheeseboard cards, a Good Vibes journal, and signed bookmarks. Only those who subscribe to my free monthly #TeamCheese newsletter before June 20th will be entered to win. You can subscribe via my website at korinamossauthor.com. The winner will be announced on my social media and in July’s newsletter. 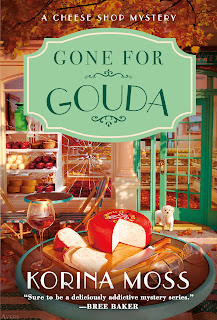 I’m already thinking ahead about fun ways to launch Book 2 in my Cheese Shop Mystery series. It’s only three months until Gone For Gouda releases. Here’s what’s happening with Willa and her Curds & Whey crew:
Things are going from gouda to bad to ugly for cheesemonger Willa Bauer in Gone for Gouda.
Yarrow Glen’s newest cheese shop, Curds & Whey, has a lot on its plate, but cheesemonger Willa Bauer relishes a challenge. There’s a float to build for the fall festival, plus the French-inspired cheese shop is playing host to celebrity vegan chef Phoebe Winston. But when photos surface that prove this vegan influencer is, in fact, a carnivore, things crumble faster than any cheese on the market: Phoebe is murdered. Willa’s employee, the affable Archie, was the last one to see Phoebe alive and the first person the police suspect. To clear his name, Willa must uncover who’s been up to no gouda...
Readers: Tell me about your favorite party!
Go to my website to order Cheddar Off Dead and Gone for Gouda and subscribe to my newsletter. Follow me on Facebook and Instagram.
Posted by Korina Moss at 12:30 AM

What fun, and I love the punny title for your second in the series.

Thank you Jim and Margaret!

Looks like a great party, Korina, and who better to celebrate with than family and friends.

What a great party and great gratitude giveaway! Can’t wait for Gone for Gouda.

This is lovely, Korina! Congratulations on your launch success and your lovely family.

So happy for you, Korina! Your titles are the best, and the story inside is terrific. Congratulations!

Thank you all very much!