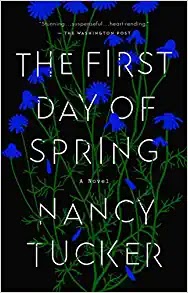 Nancy Tucker’s The First Day of Spring is her debut novel, published in 2021. Tucker is a British clinical psychologist who has published two non-fiction books, one a memoir of her battle with anorexia and the other, a collection of young women’s perspectives on mental illness. Tucker bases The First Day of Spring on the true crime case of Mary Bell, a child in the sixties who is convicted of killing two young children. Mary Bell was released from prison in 1980 and, with a new identity, raised her own daughter.

Tucker splits her fictionalized Mary Bell into two characters, a neglected eight-year-old, Chrissie, and Julia, Chrissie’s adult self, who is raising her own young daughter, Molly. Chrissie is almost feral in her daily quest for food and maternal love. Chrissie’s mother is rarely home; the kitchen cupboards are always empty. Chrissie’s one guaranteed meal a day is a hot lunch at school when term is in session, a morning bottle of milk, plus whatever she can cadge from her neighbor’s afternoon teas.

Tucker’s passages about Chrissie’s starved cravings for food are some of her best:

Hunger had started to sluice through me, but the kitchen cupboards had nothing inside except sugar and moths. I opened and closed them, thinking about the milk bottles clustered in the crate at school. It was cold that day, and it was Friday, and that meant the milk would have been fresh and the school dinner would have been fish and chips. That was my favorite. I kicked the metal base of the cooker hard, and a packet of Angel Delight slipped out from behind it. (p.60)

Tucker organizes her novel in antiphonal chapters, Chrissie and Julia, with Chrissie’s backstory neatly folded into the narrative. The child, Chrissie, searches for friendship in her closely-knit urban community. Chrissie is clever, desperate for attention, and cannot bear competition from two younger children. Driven by her lust for food and affection, she strangles them.

The grown-up Chrissie, known as Julia, is proud of providing her daughter with nutritious food, new clothes, and a structured home environment. Julia has a set routine with time for homework, reading practice, and a nightly bath, all basic elements of the childhood she didn’t experience. Julia lives in fear that child services will find her an inadequate mother and take her child away.

Near the end of the book, Julia confronts her negligent and abusive mother:

The snag of anger caught me in the soft place where my jaw met my neck. I couldn’t think how to articulate that food stopped being food when you didn’t have it, that it swelled and bloated as you shrank. It became the way you ticked off the hours, how you judged a good day from a bad one, something you stored when you had it and mourned when you didn’t. I couldn’t think how to explain the hunger, and I wasn’t sure there was any point in trying. You couldn’t understand hunger like that unless you had felt it. I wanted to tell her how it had shaped me, made me, because it had been huge and I had been tiny and it had always been there, a gnawing, nagging constant. It would have been mad to say I had killed because I was hungry, but the hunger had been a form of madness. It had driven much of what I had done back then. Sometimes I wondered if the hunger could have stopped my brain growing the way normal brains grew, because I had never had any sustenance to make new cells. (p.204-5)

How can a child kill another child? Nancy Tucker delves deep into Chrissie’s soul, and convinces us that Chrissie is successfully rehabilitated in a juvenile facility, becomes Julia, and raises her own child in a loving home.

Readers and writers, do you read about true crime or listen to true crime podcasts?

Disturbing! I would like to think that children can’t kill children, but it happens all too frequently for me to be able to convince myself. Childish emotions are powerful and without the matured brain and socialization of an adult, those emotions are harder to channel into something non-aggressive. We’re seeing, and have seen, a lot of that in our modern mass murderers.

I do read and enjoy (is that the right word? It sounds so suspicious) true crime books. Always fascinating to glimpse the justification and thought process of the criminal mind.

Kait's perspective interested me, but so does the book itself. I'm reflecting on another case where the teens killed a mother, but were later rehabilitated. Nancy Tucker shows the emotions that overpower reasoning (which brings me back to Kait's point).

This certainly deserves a wide audience.