In Saturday’s post, Rosalie Spielman introduced you to some of the characters in her new book, WELCOME HOME TO MURDER. I thought it would be fun to introduce you to a few characters in my upcoming Ice Cream Shop Mystery, MINT CHOCOLATE MURDER, and show you the inspiration boards I used for them on Pinterest.

Confession: I’m a very untidy writer. Scrawls in notebooks, scraps of paper, pages torn from glossy magazines, Post it notes, cryptically named computer files (“book ideas” – note to self, be more specific) are part of my process. Pinterest has proven to be a good help in keeping my characters, or at least their appearances, straight.

As is true of any social media, Pinterest is a blessing and a curse. It’s a time sink. Start scrolling through the unending stream of images there and you’ll see what I mean. When I decided that I wanted a fantasy ice cream social in MINT CHOCOLATE MURDER, I went down the Pinterest rabbit hole and emerged two hours later with dozens of photos and an appreciation for the artists who use ice cream as their medium. Ice cream tacos? Thai rolled ice cream? All-black charcoal ice cream? Gelato roses? It’s all there, and a lot of it went into the book (and my stomach).

Look at that ice cream! 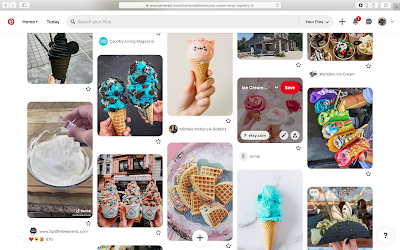 Here are a few of the inspiration boards I used as I cast my characters for the Ice Cream Shop Mysteries.

For me, Courtney Cox has always been my vision of my main character, librarian turned ice cream shop manager Riley Rhodes. She’s attractive, intelligent, down to earth, a girl next door type, friendly and open, but with an air of reserve.

Katie Kadan, who vaulted to fame on The Voice, is my model for Riley’s frenemy sidekick, the “loosest lips in Penniman,” police department secretary, Tillie O’Malley.

Riley’s best friend, Caroline Spooner, would be played by Flashdance era Jennifer Beals. Those warm brown eyes and wonderful waterfall of hair are just what I pictured for shy but strong-willed Caroline. I don’t have her picture on the board because I have her so strongly in mind.

No spoilers, but if you’re wondering why Sam Elliott and Ed Sheeran are on the boards, they are the models for characters in Book One, THE ROCKY ROAD TO RUIN. 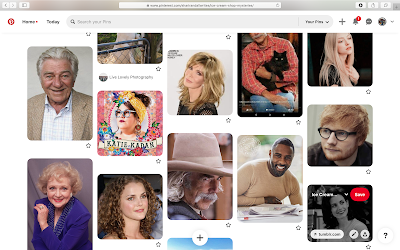 In MINT CHOCOLATE MURDER, Riley is invited to create treats for a fantasy ice cream social at Moy Mull, a castle built in the early 1900s by a Scotland-mad Penniman industrialist. The castle, modeled on Connecticut’s own Gillette’s Castle, is now the home of reclusive former supermodel Maud Monaco. I had groundbreaking supermodel Beverly Johnson in mind as I wrote the character, but several beta readers have told me that they thought the character was based on Meghan Markle (for reasons you’ll discover in the book – no spoilers here!) 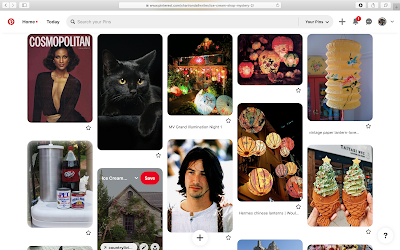 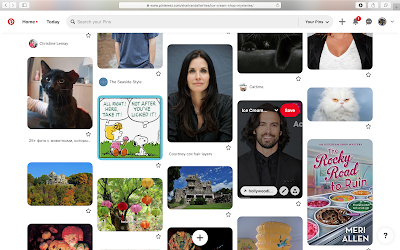 The colorful lanterns were decoration for the party.

The handsome dark-haired guy? Again no spoilers, but he’s trouble.

The cats? The spunky little black cat with a clipped ear is Rocky, Riley’s rescue. The white fluffy Persian is Sprinkles, a former show cat with the disposition of Gloria Swanson in Sunset Boulevard. I had no idea how much fun it would be to write feline characters!

Writers, how do you keep track of your characters’ appearance?

Love this! Are your boards private or public pre-publication?

I track my characters on private Pinterest boards and because I use both Plottr and Scrivener, I include photos in my character sketches.

Gosh you guys are so organized. I just make people up in my head, give the briefest of all descriptions, and let readers fill in the details.

I can see how Pinterest could turn into a time sink -- probably good to stay away from it while on deadline.

I use Pinterest for images of settings and clothing. But faces? Some of my characters' physical descriptions come from random magazine photos, which I've pinned to a bulletin board.

Hi Kait, It's public @sharirandallwrites.
I didn't know that you can include pictures on Plottr and Scrivener. Time to try Scrivener again. it would be helpful to keep everything together.

A time sink, indeed, Jim! I think you're wise!

Hi Mally, I'm always trying new things to make writing/keeping track of characters easier. One thing I haven't tried is a bulletin board or whiteboard. That's next.

Good work, Shari! I use Excel spreadsheets for the characters in each series, but I have Pinterest boards for things like the books you can find in Yon Bonny Books. I have fun stocking those shelves - and the book covers are all clickable so you can buy the books in real life.

Shari,
What fun to see these Pinterest boards and how they relate to your characters. My Pinterest boards are mainly cats, kittens, dogs,and pretty places. I receive notice of boards with knitting patterns and more dogs and cats. I never thought of using Pinterest as you do.

Fun! I don't have time to learn more social media sites, but I have a stack of printouts for buildings I write about.

Love this, Shari! Pinterest is such a great writing tool -- or so I tell myself so I can justify the amount of time I spend on it!

What a great idea!

It can be very helpful to have an actual image of something or someone that's vivid in your writer's imagination but who defies being described in actual words.