A Brief History of Hues by Susan Van Kirk 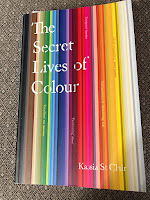 I’ve been reading a fascinating book as I research color for the second of my art center mysteries called Death in a Bygone Hue. (The first book, Death in a Pale Hue, comes out in five days.) A freelance journalist based in London, Kassia St Clair wrote The Secret Lives of Colour in 2016, and it is one of the most fascinating books I’ve read about the historical journey of various shades of color.

Even the book is a work of art as you can see from the pages, each edged with the colors they’re describing. My protagonist, Jill Madison, sees the world through eyes that identify hues, and it’s important I be able to add some color commentary about her thoughts. (Yes, forgive the pun.)

It’s fun to read about the history of colors, so I picked two to mention. These colors have similarities in their histories since they were expensive to make, signifying luxury and power. Both were made through an arduous process. But while scarlet has a history of good and evil, Tyrian purple has a complex history involving power. I thought it might be fun to look at a brief history of these two colors. St. Clair’s book goes into far more detail.

Scarlet has always been a controversial color with both advocates and detractors. Lovers of history can see scarlet’s controversy in the execution of Mary Queen of Scots in 1587. Before her death, she removed her outer clothes to reveal a scarlet under-gown. In the Catholic Church, scarlet symbolized martyrdom, so Mary’s supporters found this an appropriate choice. But those who hated Mary and her religion, associated the color with scarlet women. I suppose your interpretation depends on your politics. From my own reading as a child, I remember vividly the scene in Gone with the Wind when Rhett Butler forced Scarlet O’Hara to wear a scarlet dress to Ashley’s birthday party once the community knew Scarlet was after Ashley, Melanie’s husband. And, if memory serves me, Scarlet sure looked evil, narrowing her eyes, in the movie.

Over the centuries, scarlet cloth was expensive because of its origin. It was made from tiny insects, and a single gram of dye required eighty kermes beetles from southern Europe. Because of its scarcity, it was associated with luxury. The Roman generals wore it, and Oliver Cromwell’s officers wore coats of scarlet, signifying leadership. Again, we see the power side. On the other hand, in the Middle Ages the lusty Wife of Bath in Chaucer’s The Canterbury Tales loved scarlet. The Puritans of the time believed the Catholic Church’s red-robed cardinals were evil. Controversial through history. That’s the color scarlet. 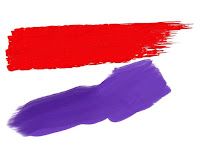 And now we turn to Tyrian purple. One of the more memorable stories in St. Clair’s book is that of Cleopatra, who, in 48 B.C., seduced Julius Caesar in Egypt after being smuggled into his lodgings in a rug. Nine months later, little Caesarion was born, and Julius Caesar declared only he, Julius Caesar, could wear Cleopatra’s favorite color, Tyrian purple.

Like scarlet, this color was horribly difficult to make. Two types of shellfish nearly went extinct over the years because it took so many of them to make this dye. Harvested from the glands of shellfish, the liquid soaking the cloth was mixed with stale urine for ten days. It was a stinky process. Like scarlet, this color was also expensive, often equated with silver or gold. In Rome, it was a symbol of power, status, and royalty. Beyond Julius Caesar’s time, generals could wear purple with gold, and senators, praetors, and consuls wore togas with a band of Tyrian purple. Status and power. By the fourth century, only the emperor could wear it once again, and if anyone else did, death was the punishment.

By 1453, the capital of Constantinople fell to the Turkish Empire and the secret of making the dye vanished. But four centuries later, a French marine biologist found a way to make it once again.

I don’t anticipate my protagonist, Jill Madison, will be spouting off these historical details in conversations over lunch. But St Clair has so many interesting stories about the history of colors that Jill might remember a short blurb about a particular hue she sees. Perhaps when she has dinner with her new man at a restaurant in Apple Grove, she’ll remember a factoid about the color of the wine she’s eying in her glass, and a smile will come over her face as she remembers a color story.

Interesting stuff -- but it leaves me wondering, how did the first person determine how to make the colors? What accident or what need drew them to the discovery?

Jim, the earliest color the author records goes back 350,000 year to the Paleolithic Period. It was a deep black produced from the ashes of fires. Yet another example is lead white from 2300 BC, used to prime a wall before painting. The mural was discovered in the tomb of a leader in an area between China and North Korea. Lead white has been produced throughout time.

I love the history of color, including the vivid hues used in Colonial America (Williamsburg) and in the nineteenth century, the technological advances in dyes for fabrics and wallpaper. Looking forward to reading your new series.

I love this, Susan! Thanks for two interesting reads - this post, but especially Death in a Pale Hue.

Looking forward to your series - what a unique skill for a protagonist!

I love the discussion on colors. I learned, in Italy, that yellow had the same expensive quality. I think I remember the dye was made from flower stamens. I heard that's why some Italian cities have so many towers - they weren't militarily defensive, they were meant to be a place to hang the dyed cloth and to keep the secret of dyeing it away from prying eyes.

Happy book birthday!
This is absolutely fascinating and the book is gorgeous.

Fascinating! Thanks for the look at the history of colors.

A little off the subject, but it calls to mind Yellow Breeches Creek in Pennsylvania. It was supposedly called that because it carries limestone with a high ferrous content, & British soldiers washing their white britches in the water came away with yellow pants.

Oh my. So many interesting comments about color. The trick will be to find places a color comment can fit seamlessly into the next book! Thanks for your comments.

Can't wait for the next book. So enjoyed reading the preview of this one. Gave me a warm colorful feeling.