Though I wrote one series with a male protagonist, I prefer to write female sleuths. Each sleuth is carefully crafted so that no two are alike, and yet there is an integrity imbued into each lead character. I liken it to a soup base, in that the soup is truly defined by the extras but the part that’s holding it all together, the base, should get the credit. Without the base, there’d be no soup. It would be lumps of meat and/or veggies.

To illustrate, I’ll compare my two paranormal mystery sleuths, Baxley Powell from my Dreamwalker series and Tabby Winslow from my forthcoming A Magic Candle Shop Mystery series. Both sleuths are hearth-centered, and they place the highest value on their family. Both have pets. Both have unusual, and some might say, abnormal abilities. Baxley communicates with spirits in her dreams, she can detect lies, and she has a touch of psychometry, in that she can feel energy residue on solid objects. Tabby is an aura reader, a telepath with her twin sister, and she can give or take energy at her whim. 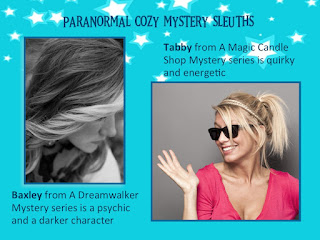 At heart, these sleuths believe in doing the right thing, they are as honest as the day is long. They have compassion and empathy. Both were reluctant to use their powers and become sleuths, and ultimately they accepted both challenges for the good of their family. They are compelled to help others. They are close in age with Baxley being twenty-eight years old and Tabby thirty. Baxley’s Achilles heel is her young daughter; Tabby’s weakest link is her fraternal twin sister.

Sounds like they are similar, right? And yet Baxley runs into a host of paranormal oddities: a ghost dog, a haunted house, a Machiavellian mentor with superpowers, a selkie, energy vampires, even a serial killer with an extra gear. Tabby’s life is more in the ordinary world, with Tabby’s family being the outliers. She tangles with hungry developers and a spurned spouse out for revenge. Those story world differences force differences in their characterizations.

Baxley sees visions, does touch readings, and has a paranormal mentor. Her missing husband is a several book story arc. In comparison, Tabby struggles to keep the family business afloat, to keep her volatile twin fully charged, to hide her talents from the real world, and to accept who she is. With her only family members being an aunt and her twin, there’s nowhere to hide because she faces adult responsibilities every day. Keeping the family business open is key to her family’s survival because the ground beneath the shop (and their apartment atop the shop) is a natural recharge station for them, and that’s not true of most places in Savannah or the world. 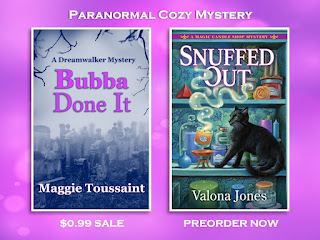 As a special treat for the Writers Who Kill fans, Bubba Done It (with sleuth Baxley Powell, A Dreamwalker Mystery) written as Maggie Toussaint, is on sale now. Click over to my website for more information about this book and series. My first A Magic Candle Shop Mystery, Snuffed Out (with sleuth Tabby Winslow) written as Valona Jones, is now up for pre-order.

So yes, that’s a new thing. I have a secret identity for the new series, though with the internet not much is a secret these days. While it’s strange to have two identities, so far I’ve created a second website and a second author Facebook page. On Goodreads I’m only allowed one author identification for my email, so it was suggested that I create a new email for Valona Jones and register for another Goodreads account. Onward and upward!

Here's hoping that fans of this blog will share their advice on how to comport myself in my Valona Jones identity. I look forward to reading your suggestions.

Valona Jones, aka Maggie Toussaint, writes paranormal cozy mysteries set in Southern locales. Her work blends mystery and the unexplained, along with a sprinkle of romance. She sharpened her people-watching skills as a lifelong introvert and thankfully had a bank vault full of personal observations when she began to write fiction. Her forthcoming release, Snuffed Out, A Magic Candle Shop Mystery, is slated for a January 10, 2023, release. She’s a member of Mystery Writers of America and Sisters in Crime. She lives in coastal Georgia, where time and tide wait for no one. Visit her at https://valonajones.com

Best of luck on the new series, Maggie. Miss seeing your smiling face in person.

Love your books! I find the local color intriguing, and the paranormal element to be "just right;" not overwhelming and not incidental.

Thanks for blogging. So excited about the new series and the new persona.

Since I've already read books one and two, with a start on number three, I can say that Maggie has done it again. This series takes the paranormal genre to a new level, and it takes place in a city I know fairly well, Savannah. Best of luck with the series, Maggie.

Sorry to have spaced on the date for this post, but it is delightful to see so many friendly faces here.

I miss your days of hanging out in Savannah, Jim.

Thank you Kait and Margaret Hamilton for eagerly awaiting my new release. Much appreciated!

KM, I take your compliment to heart. We all have a continuum of where we draw the line on various elements in our books we write and the ones we read. I'm so glad that my version of it works for you. I work hard to strike a blend that is just right for me, and it is wonderful to get that affirmation from peers and readers. You made my day!

Thanks, Debra, and I meant to be here in person. Had computer problems for a few days and got seriously aggravated with my local ISP. Whew. Sometimes the drawbacks of living in a rural place hit hard.

As always, thanks Polly for all you do to help my books shine. I am indebted to you my friend for calling me on stuff I didn't even realize I was doing. That's the best kind of critiquing. You see where I'm blind and hopefully vice versa. I so enjoy writing this new series, and these days you know so much more about Savannah than I do.

Thanks, Writers Who Kill, for the invite to post here. It is always a pleasure, even if I am a bit tardy.

Can’t wait to read the new series! All the best!

thanks, Karla! I truly enjoy writing paranormal mysteries, and keeping it cozy fits my lane as well. Looking forward to your next one as well.