Authors and Age: A blog by Warren Bull 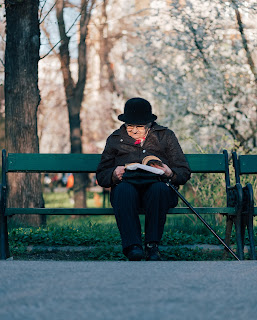 Image by Alex Blajan on Unsplash

Authors and Age: A blog by Warren Bull

I often tell people that I am at an age where there are only a few things I can do better now than I could when I was younger. My singing and songwriting are still improving. So is my writing. And I am not alone in that.

After Raymond Chandler lost his job as an executive in an oil company during the great depression, he described in a letter to his English publisher, Hamish Hamilton, how he became an author. “Wandering up and down the Pacific Coast in an automobile I began to read pulp magazines, because they were cheap enough to throw away and because I never had at any time any taste for the kind of thing which is known as women's magazines. This was in the great days of the Black Mask (if I may call them great days) and it struck me that some of the writing was pretty forceful and honest, even though it had its crude aspect. I decided that this might be a good way to try to learn to write fiction and get paid a small amount of money at the same time. I spent five months over an 18,000-word novelette and sold it for $180. After that I never looked back, although I had a good many uneasy periods looking forward.

Chandler sold The Big Sleep at age 51 and followed that with at least three novels considered masterpieces: Farewell, My Lovely (1940), The Little Sister (1949), and The Long Goodbye (1953). Mystery writers will not be surprised that critics call them great books where a mystery happens rather than mysteries. With Dashiell Hammett and James M. Cain, he is considered a founder of the noir genre.

Chandler always sought out literary praise. He knew his work would be considered “just mysteries” and he was bitterly disappointed in himself. He worked very hard to achieve the timeless style he displayed but never valued his work as much as many others do.

For much of his life, Richard Adams was an anonymous civil servant in London. He wrote government reports on the environment and became a passionate ecologist. He also made up stories about rabbits to entertain his two young daughters on long drives in the country.

When he was 50, at their urging, he began turning his stories into a book intended for juveniles and young adults, writing after work and in the evenings. In two years he authored Watership Down. The book had an unpromising start, rejected by literary agents and publishers. But in 1972, a small house, Rex Collings Ltd., printed a first edition of 2,500 copies. British critics raved, comparing the book to George Orwell’s Animal Farm and to the fantasies of J. R. R. Tolkien, Jonathan Swift, and A. A. Milne. A year later, Penguin issued the novel in its Puffin Books children’s series.

While many critics praised it others found it pretentious.

For example, Richard Gilman, in The New York Times Book Review, said it fell far short of Lewis Carroll’s Alice in Wonderland and Kenneth Grahame’s The Wind in the Willows, and predicted it would “find its true audience mainly among the people who have made a cult of Tolkien, among ecology-minded romantics and all those in need of a positive statement, not too subtle but not too blatant either, about the future of courage, native simplicity, the life-force, and so on.”

The book rose to the top of the New York Times best-seller list and stayed on the list for eight months. It became Penguin’s all-time best seller.

Watership Down struck it rich. It quickly topped the New York Times best-seller list and remained on it for eight months. It was a Book of the Month Club selection. Avon paid $800,000 for the paperback rights. It eventually became Penguin’s all-time bestseller, a staple of high school English classes, and one of the best-selling books of the century, with an estimated 50 million copies in print in 18 languages worldwide.

Not bad for a not-too-subtle YA novel about rabbits.

After the stock market crash of 1929 wiped out the family savings, Laura Ingalls Wilder started to work on the first book of what was to become the Little House on the Praire series. Aided extensively by her daughter, Rose Wilder Lane, who was a professional writer, Wilder went from writing a column about farm living and poultry editor for the St. Louis Star, to writing eight books that have never been out of print and have been published in 40 languages. Wilder’s autobiography Pioneer Girl contains a darker picture of the frontier. With a television series and mass marketing the books spawned an industry of their own.

Some use of the language of the time and portrayals of Native Americans have made the work more controversial over time. Despite Wilder’s wishes her daughter, Rose

Wilder Lane named Roger MacBride as Lane’s heir and he inherited the literary estate rather than the library Wilder intended to own the estate.

In the interest of full disclosure, I hereby admit that as a youngster I was enamored with Little House books. It never bothered me that the protagonist was a girl. My wife nearly devoured the books and read at least one set to shreds.

I am in the process of revising my will. Maybe that was the start of the train of thought that led to this blog. In terms of my literary estate will entertain suggestions (and cashier's checks.) Please give this serious consideration.

I have decided to leave my books' earnings to one of my sons. I'm sure he and his wife and son will have a good evening out at McDonald's maybe once a month or every other month. One must think ahead. Great, inspiring blog, Warren.

Very interesting. I had no idea that Watership Down was a YA – I was in college when it was released and read and loved it then. Poor Laura, there’s a cautionary tale there.

I didn't know that about Laura and Rose! Thanks for a great blog, Warren.

I love reading about these authors. I have decided my books will end with me.

Interesting! I knew about everybody except Richard Adams.