The Longest Year of My Life

A week ago today, I celebrated the 70th anniversary of my birth. It was the longest year of my life. To be clear, we’re talking my birth years, which run October 27 through October 26. That’s a fact; it’s also a perception. Before I explain that, today is Election Day in the United States. I cast my votes weeks ago. If you are eligible to vote and have waited until today, I wish you short lines and a safe process.

So what’s this nonsense about this past year being the longest year of my life?

Typical years have 365 days, and each day lasts twenty-four hours. The sun does not play by our calendar rules, refusing to allow the Earth to rotate around it in a precise whole number of days. To adjust, we’ve created leap years. Every four years we tack an extra day onto February (except years divisible by 100 but not divisible by 400—relax, there won’t be a test and the next one of those will be 2100). Given those rules, 2020 leapt and ran 366 days. This is the eighteenth leap year I’ve lived in, so that isn’t what makes this my longest. Scientists occasionally add a leap second to keep the atomic clock and astrological clock in sync. They added the last one of those on December 31, 2016, so that’s not the answer either.

Daylight savings time could have an effect. Usually the spring-forward-fall-back routines both occur during my same birth year. A couple of years I lost an hour in one year and gained it back in the following year, meaning I experienced 364 days and 23 hours in one year and 365 days and one hour the next.

But that didn’t happen this year, either. Last year (10/27/18–10/26/19) wins hands down as my shortest year. In flying west to Australia, I crossed the International Dateline and lost fifteen hours by the time I landed! We did not return until after my birthday, making my 69th year only 364 days and 9 hours long.

In November 2019, we returned to the US from Australia and I regained the lost time. Plus, 2020 is a leap year. Combined, they caused me to experience a year with 366 days and 15 hours! And what a year it was. 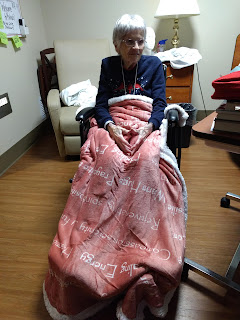 On the day we returned to the US and before jet lag got the better of me, I visited my mother in her nursing home. She was in good spirits, but her stomach was feeling a little uggie. Two days later she was dead. She was nearly 96 and ready for the next step in her spiritual journey. I am probably delusional, but I believe she waited for me to return to see her before she left this earthly coil.

And not a day goes by when I am not glad of her timing. Had she lived another few months, the COVID-19 crisis that has devastated lives of many who live(d) in nursing homes would have caught her. Mom’s room was on the second floor facing an interior courtyard with no way for her to see her family. Given she suffered from COPD, she would not have survived the virus as it ran through her nursing home in the spring, and none of her family could have been there to support her.

In March I began to obsess over the effects of COVID-19 on US lives and its economy. I wrote a series of blogs explaining why I projected infection rates and deaths far above levels the federal government was forecasting. Unfortunately, I was right. By June, I gave up forecasting. Our inadequate response meant we were setting our own course and would experience higher death rates than seen in most of the developed world.

In early May, we began holing up at our home in Michigan's Upper Peninsula (the location used in Cabin Fever and Empty Promises), going into town as little as possible, and seeing lake neighbors only while outside. For a while, the virus largely spared the UP, but hubris and ignorance combined to assure that when it arrived, it spread like wildfire. In September and October, my county of 11,000 residents progressed from green to red, and now has a deaths-per-million rate that exceeds 2,000 (placing it worse than the average for New Jersey, currently the state with the highest mortality rate).

Shortly before we left Australia, we began seeing the wildfires that eventually devastated much of that continent. Those fires presaged our own record year in the US West. We had days in the UP where we could smell the smoke from those fires. Natural disasters haven’t limited themselves to fires. We have the greatest number of named Atlantic storm systems (as I write this, Zeta is churning in the Gulf of Mexico and Eta just forming); the hottest temperatures ever recorded above the arctic circle occurred this summer in Russia; we experienced the second lowest amount of arctic sea ice (only 2012 was lower). The list of environmental calamities goes on.

Add to that, politics. I won’t describe my angst other than to say I am a social progressive, an environmentalist, a fiscal conservative, and do not have the will to turn off the news or bury my head in the sand.

Virus, politics, and a tendency toward periodic depression sapped my enthusiasm for writing. I published “Furthermore,” a Seamus McCree novella, to excellent reviews. (Here is the link to EB Davis’s interview on WWK.) My editor has a draft of the first book in a spinoff series featuring Niki from Cabin Fever (which now seems somewhat prescient because she and Seamus battle a local Michigan militia). I’m working on the second book in that series and sketching the outline for the seventh novel in the Seamus McCree series. 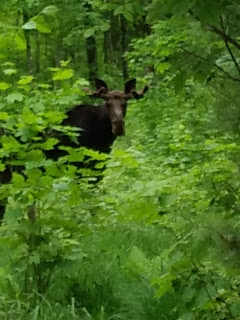 It hasn’t been all gloom and doom. I signed up to run both a half-marathon (my second) and a marathon (my first). My training runs are things of beauty. I’m not talking about my form or speed. I use logging roads deep in the woods and rarely see people but frequently startle deer and ruffed grouse. Several times I have had to wait or retreat until moose ceded me rights to the road. The races were cancelled, but I created and completed my personal races. In the uncrowded field of one, I took first place.

Typically, my reading tends mostly to mystery/suspense/thriller for fiction, combined with a smattering of nonfiction. This year, nonfiction rarely catches my eye, and I’ve found myself attracted to more fantasy than usual. A psychologist would have a field day with that! I’ve always preferred printed books, but, unless I read a book from my personal library, everything is electronic now. I miss paper.

Thankfully, my longest year has ended. My birthday wish for myself is to enjoy each of the 365 days before my next birthday. And my wishes for all of us are a viable vaccine and a return to civility. How are you doing this year?

A very thought-provoking post, Jim. Happy belated birthday, and congrats on the races. Have done a few distance runs (half/full/30k), I know the disciple involved. Here's wishing us all a better 2021.

Happy birthday, Jim, and I do hope your 71st natal year brings nothing but joy.

Love the photo of Mr. Moose. What a great sight on a run. Are you preparing with trail runs? That will definitely make you a stronger runner. Good luck with marathon and the half marathon. Run well, write well.

Run, Jim, Run! Is the moose your new running partner?

Wishing you a productive year and maybe happy travels.

Hope you have a wonderful new year.

Margaret - The moose is most assuredly NOT a running partner -- more of a free spirit who goes where he wants, when he wants.

Kait -- No trail runs for me. Too much opportunity for turning ankles and wrenching knees, both of which are potential trouble spots after my soccer-playing days. Gravel or dirt roads are my preference.

I think you're right, that people near death stick around until certain people can visit them. One of my aunts hung on until the Red Cross ( I think it was them) arranged for my cousin to be fetched from a submarine to visit her. She died half an hour after he arrived.

I also had two superstitious Irish aunts who were convinced that anyone who died between the hours of noon and three on Good Friday was granted the same pardon from purgatory as Dismas. They both died then, although years apart.

Ah so that was a moose on the side of a road or an unrelated running picture.

Totally agree with you about trail runs. Hubs keeps a swath cut for me in the summer that goes from my house to the trail head and even that can be fraught with peril!

Wow Jim! What a year. I've run many half marathons, but no fulls. That is truly impressive! This year, I've struggled to motivate myself to get off the couch and run 3 or 4 miles. I hope when I grow up and I'm 70 I can still run halfs (and keep writing) like you.

I so enjoy your viewpoint of numbers and all things mathematical, Jim.
We were camping in or near (can't remember) Grand Teton National Park when an elk moseyed through. A steady diet of cartoon animals and nature specials didn't prepare me for the sheer size of the beast, and I imagine your moose was taller than you, too. I would definitely give that moose the right of way!

You have a safe and beautiful place to hold up during this crisis. And your neighbors may be troublesome, but they are impressive!

Have a very happy birthday! Glad for your productivity and peaceful runs.

Kelly -- I'm sure you can keep running half-marathons (as long as you are trying to go faster than your much younger self -- then you die!)

Shari -- Elk are magnificent creatures. An dyes, the moose is taller than I am. The top of my head (and I am a six-footer) comes to the top of his shoulder!

EB -- Yep -- sometime I'll need to include the story of the time I startled a sleeping wolf awake while running.