I feel like there are authors who excel at short stories. I’ve enjoyed various such authors over the years, from O. Henry to John Updike to Sarah M. Chen. I’ve written a few myself, but it takes a different sort of skill to craft a novel than a short punch of a tale.

Last year, I decided to challenge myself by writing to a theme and submitting my work. I’m happy to announce that my short stories were accepted by two anthologies. The first, Festive Mayhem, is a collection of holiday-themed tales of suspense and mystery. The stories range in flavor from warm and cozy to downright cold. Here’s a rundown of the works you’ll find in the collection: 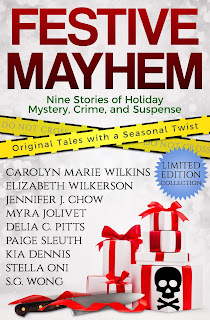 • "The New Year's Hex" by Carolyn Marie Wilkins. Carrie McFarland finds her New Year's plans derailed when a psychic vision pulls the 1920s African American amateur sleuth into someone's evil scheme.
• "Pipe Dreams" by S.G. Wong. In this hard-boiled Crescent City short story, infatuation and passion drive Minnie Chen straight into danger as she tries to best the City's most glamorous private detective in a reimagined 1930s-era Chinese Los Angeles.
• "A Christmas Tip" by Elizabeth Wilkerson. A surprise Christmas bonus becomes too tempting for Philadelphia nursing assistant Brianna Byers to resist—even if accepting requires some skillful skirting of the law.
• "The Stranger in the House" by Stella Oni. This London House Mystery prequel stars Elizabeth Ojo, a Nigerian housekeeper at a posh guest house, who finds her Christmas intersecting with that of a mysterious resident in trouble.
• "What Lies Inside" by Kia Dennis. A tormented university professor falls deeper and deeper into a destructive obsession in this harrowing tale of love and longing.
• "A Deadly First" by Delia C. Pitts. Thanksgiving takes a fatal turn when New York private eye SJ Rook finds himself thrust into his first murder case in this darkly atmospheric tale of noir.
• "The Holiday Murder Mélange" by Myra Jolivet. This Sarah Doucette Jean-Louis short story follows the Creole P.I. around the San Francisco Bay Area on her quest to figure out who killed a man outside of her office.
• "Those Holiday Blues" by Jennifer J. Chow. Jasmine, aka "Jazz," can't escape the tragic past when an old boyfriend asks to meet on the anniversary of his mother's death.
• "Holiday Holdup" by Paige Sleuth. In this Cozy Cat Caper Mystery Short, Imogene Little gets tangled up in a Christmas Eve bank robbery orchestrated by none other than Santa Claus himself.

The second anthology releases in fall of 2021. Spearheaded by our very own Abby L. Vandiver, it’ll be published by Crooked Lane Books. The collection will feature original mystery and crime stories from nineteen authors of color.

Although my mystery writing specialty is cozy series, I’ve veered off course for these anthologies. The stories in them are more chilling than my usual fare. I think I needed a break from the same type of writing, and I also wanted to stretch my creative wings. Sometimes I doubt myself and wonder if I should have strayed from my typical writing style. Share your thoughts below.

Do you prefer stories similar to an author’s previous works? Why or why not?

Short stories are fun, and I look forward to reading yours. I like experimenting with different characters and settings, going light or dark, using open endings.

Interesting. Thanks for sharing, Margaret!

I enjoy reading short stories both outside of and within an author's typical genre. And as a writer, sometimes you just want to try something new. So glad I get to be a part of both of these anthologies with you!

Sometimes the idea percolating in my brain is a short burst of drama and that makes for a good tale. But most often I find I look for the telling inflection point, the clear and compelling but slight moment when a character’s life flipped. That gives me the kernel for short stories I like to write. I am delighted to be in both these anthologies with you, Jen!

I love short stories! I love reading them and writing them. They are a great way to experiment. I often see them as similar to an author's sketch--satisfying in their own right, but often a piece of something larger.

Starting at Thanksgiving, several of us here at Writers Who Kill will present short stories, some holiday-themed, as a gift to our readers.

I'm excited to be in these anthologies with you, too!

KM:
Yes! Love that Writers Who Kill will be featuring some great short stories on our site.