"Dealing at the Dump," in Cozy Villages of Death

Several years ago, I wrote “Dealing at the Dump” for an exotic location anthology. Because I only write about places where I’ve spent a fair amount of time—I can’t watch HGTV and learn enough about a faraway setting to give it credibility—I made a list of places I’d lived in New England, New Jersey, Ohio, Atlanta, and northern and southern California. I could have written another New Orleans story, but a Cape Cod setting appealed to me, not at the fish pier, beach, or a seafood restaurant. I would set my story at a town dump.

For most of my life, I spent all or part of every summer at my grandparents’ cottage on Cape Cod. In addition to checking the family mailbox at the local post office, where I studied the FBI’s most wanted posters, we made a daily trip to the dump, throwing our household trash off the cliff into the landfill. I describe a modern transfer station in the opening pages of the story:

“The Beach Haven dump had morphed from the stinking mounds of garbage and shrieking seagulls of Kathleen’s childhood into a twenty-first center transfer station, offering every kind of recycling imaginable, including composting food waste. Furniture and household items went to new homes from the swap shop, magazines and books free for the taking. Solar panels generating power covered the closed portion of the old dump. In fact, very little garbage was collected and compacted for transport to an off-Cape commercial incinerator.”

While promoting The Long Call, Ann Cleeves described the process of creating a new character in a setting she had known as a child. Certain things about a place—the clouds in a spring sky, longer daylight hours as the spring equinox approaches, the resident seabird population—never change. Though I had last visited the Cape in 2006, I could draw on my memories of March visits. Spring comes late to the Cape, the snowbirds returning from warmer climates, and cottage owners opening up their homes. Cape Cod towns come to life by Memorial weekend, though Fourth of July is the traditional start of the two-month summer season.

Once I had a setting and time of year, I needed a crime. Finding a murder victim at the town dump seemed rather prosaic, but drug dealing did not. My story opens when an elderly woman offers to sell prescription opioids to Kathleen, the new dump caretaker. Kathleen refuses and contacts the police, who have long-suspected the dump is the site of illegal drug activity.

Kathleen is on the run from an abusive husband and his girlfriend, hiding in plain sight in the caretaker’s cottage. She teams up with her childhood friend, Jack, to assist the police in identifying the members of a local drug ring and arresting them.

I added a second setting, where Kathleen and Jack run their dogs on a Nantucket Sound barrier beach:

“The jetties had done their intended job, trapping and holding the sand on the barrier beach in front of the marsh. The tide was receding, the waves gently breaking on shore…She watched the sanderlings and sandpipers feed as they scampered along the water’s edge.”

During one of my childhood summers, new jetties were constructed, which involved bulldozers digging up great chunks of peat and leaving them scattered on the beach. I was one of a pack of children who built forts at the top of the dunes using blocks of peat, and then staged battles, hurling the pieces of peat at the kids in another fort. In an enlarged photo Jack gives Kathleen, she’s the only girl in a pack of boys, holding a clump of eel grass and wearing a devilish grin. Me, age ten.

I’ll continue to write about Kathleen McKinnon’s sleuthing adventures with her goldendoodle, Floyd. Her job as a dump caretaker gives her access to a large cross section of the local population, offering many possibilities for criminal activity.

Though my story wasn’t accepted for the original anthology, Lyn Worthen will publish it in her  Fall 2020 Cozy Villages of Death anthology.

Readers, do you enjoy learning about new locations when reading? Writers, do you write about familiar locations, or research new and different locales to set your stories? 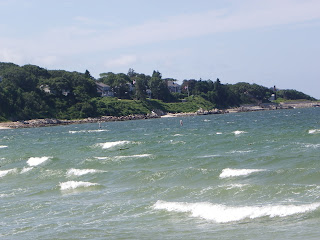 I love your descriptions of these locations. In fact, reading is a way for me to travel to other places vicariously. I have deep roots in the Midwest, and I can't imagine living anywhere else. But your picturesque descriptions, even about the transfer station/town dump are intriguing! Glad you're getting this published.

Susan, I'm happy I found a home for it too! I've lived so many places that nothing feels like "home" except Cape Cod.

I do enjoy traveling through books. Pre-Covid some books served as catalysts for actual trips. Like you, I stick close to my roots when writing. Familiarity, either through daily exposure or careful research trips, gives a depth of nuance that shines through.

Kait, good to have you in Maine sharing your observations on social media, and, I assume, in your writing.

I'm so glad your story found a home - congratulations! You've made a transfer station intriguing. I loved reading about your time on the Cape. There's something that feels so eternal about the place where the ocean meets the shore, where kids play the way they have for centuries. You made it come alive.

Thanks, Shari! At my daughter's Cape Cod wedding last summer, I realized how closely we still feel to the Cape and its beaches and marshes.

Always in the writing, Margaret. I enjoy our exchanges!