Writing “The End” and New Beginnings

My dream of becoming a published mystery author was realized in July 2014, with the signing of a three-book contract with Barking Rain Press for my Glass Dolphin cozy mystery series. The first book in the series, The Hanged Man’s Noose, released in July 2015, and introduced readers to Lount’s Landing, a small town about ninety minutes north of Toronto, Canada.

Loosely based on Holland Landing, where I had lived for the past twenty years, I created a Main Street filled with independent shops, restaurants, and businesses. One of those businesses was the Glass Dolphin antiques shop, owned by Arabella Carpenter, an avid historian who didn’t suffer fools—or change—gladly. She certainly wasn’t about to welcome Garrett Stonehaven, an unscrupulous developer from Toronto, or his plans to build a megabox store on Main Street.

In addition to Arabella, I created Emily Garland, an idealistic journalist sent to Lount’s Landing to discover the real truth behind Stonehaven’s development plan, Levon Larroquette, an antiques picker who also happened to be Arabella’s ex-husband, and a host of other colorful characters.

In book two in the series, A Hole in One, Emily and Arabella are now partners in the Glass Dolphin, and, hoping to generate buzz for the store, they decide to sponsor a hole in one contest at a charity golf tournament. Unfortunately, when Arabella hits her ball into the woods and stumbles upon a dead body, “buzz” takes on an entirely new meaning. Especially when Levon becomes the prime suspect.

And that brings us to the third book in the series: Where There’s a Will. I’ve included a blurb about the book at the bottom of this post, but before we get to that, I should also tell you that it’s the final book in the series (though each book can be read as a standalone). It’s not because I don’t love the characters. I do. In fact, Arabella has a small, but recurring role in my Marketville Mystery series, Levon makes a significant contribution in A Fool’s Journey (book 3), and it’s only a matter of time before Emily finds her way into one or more of my stories.

So why, when I wrote “The End” in Where There’s A Will, did I know it was the end of the series? There’s no simple answer beyond the fact that my main characters are finally at a point in their lives where they were truly happy, doing what they were meant to do, with the people they were meant to be with. And I want that “happily ever after” to last, even if it is the stuff of fairy tales and cozy mysteries.

It’s not just the Glass Dolphin series that’s coming to an end. When I agreed to become a regular contributor on Writers Who Kill, I underestimated the amount of time my position as Chair of Crime Writers of Canada would take. Add book writing and anthology publishing to the mix and something had to give. As such, this is also the last regular post on Writers Who Kill, though I hope to return as a guest blogger in the future. It’s been an honor and a privilege to be listed among the authors in this group.

Emily Garland is getting married and looking for the perfect forever home. When the old, and some say haunted, Hadley house comes up for sale, she’s convinced it’s “the one.” The house is also perfect for reality TV star Miles Pemberton and his new series, House Haunters. Emily will fight for her dream home, but Pemberton’s pockets are deeper than Emily’s, and he’ll stretch the rules to get what he wants.

While Pemberton racks up enemies all around Lount’s Landing, Arabella Carpenter, Emily’s partner at the Glass Dolphin antiques shop, has been hired to appraise the contents of the estate, along with her ex-husband, Levon. Could the feuding beneficiaries decide there’s a conflict of interest? Could Pemberton?

Things get even more complicated when Arabella and Levon discover another will hidden inside the house, and with it, a decades-old secret. Can the property stay on the market? And if so, who will make the winning offer: Emily or Miles Pemberton? 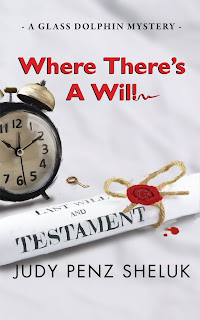 Where There's A Will is available on Kindle, Kobo, Nook, and Apple Books for a special introductory price of $2.99 (reg. $4.99), as well as in trade paperback at all the usual suspects.
Posted by Judy Penz Sheluk at 5:00 AM

I'm going to miss writing for WWK, but I'm going to keep on reading it as it lands in my inbox every day.

Oh, Judy, I am going to miss you! Hopefully, we will see you often as a guest. I'm off to get my copy of Where There's A Will. As a former probate paralegal - how can I resist!

Thanks Kait! My friend, Dan, is a lawyer specializing in estate law. He was invaluable in my getting the facts right. I hope you enjoy it!

We'll miss you, but I have to confess that I've wondered how you manage to handle everything you do with your writing career (and presumably you have a personal life, too!)

Looking forward to reading more of your books.

I've read this entire series, including this latest offering. I loved these stories, and when I reached the end of the new one I had the feeling it was the end. I thought, "What? How can you do this?" Now I understand, but I will miss this series, Judy.

Congratulations on your latest release and keep in touch. We'll miss you.

Thanks Kathleen. Yes, it was getting hard to juggle it all. I do have a personal life, though my hubby likes to say I am attached to my computer by IV!

Susan, you and I go way back to our pre-published days. So amazed at how far we've both come!

Margaret, thank you for your support and encouragement. I'll be back!

I'm so sorry to see you go, Judy. It's been a joy to have you here.

Good luck on your endeavors!

Thanks Annette (congrats on the agent!)