What I Saw in You by Susan Van Kirk

Recently, I was checking something on my Facebook page and noticed the self-description I wrote several years ago: “Former Teacher Turned Mystery Writer.” My mind went back to the first time I even thought about writing a book. I realize everyone has a story, but in my case, it was one of those incidents that make me realize there is a pattern in the universe going on behind the scenes. Karma.

Most people go to graduate school when they finish their undergraduate years, but I waited until I was fifty years old. I had children to raise and put through college first. So, having been out of the classroom as a student for almost thirty years, I went to the University of Illinois for three summers to get my M.Ed. in Secondary Education. It was a little scary at first, but once I got into the zone, I was fine. Most of my professors had not been born when I started teaching. I signed up for a class on Reflective Teaching. It was a decision that led me to become a writer.

Several of the assignments in that class called for me to connect my teaching career with what I believed long before I started teaching. How did my philosophy of teaching connect to who I was inside? My values?

I remember writing a paper in that class about growing up at the drive-in theater in my town. My great uncle had built that drive-in movie theater shortly after World War II. My dad managed it, and I literally grew up in that magical place. Some movies I saw seven or eight times, like “The Greatest Show on Earth” or “The Spirit of St. Louis.” That place and time had a profound influence on who I am. While my parents taught me many good values, I also learned from those movies. Teachers reflect who they are and what they believe when they teach, and their interactions with students also reflect those values.

Before that Reflective Teaching class ended, I’ll never forget my professor wrote on one of my papers, “You have a unique voice and a riveting way of telling a story. Have you ever thought about writing books?”

No, I hadn’t. She saw in me something I hadn’t seen in myself, an awareness of how my character developed through those earlier years, plus an ability to describe and connect those events and reactions to how I taught. 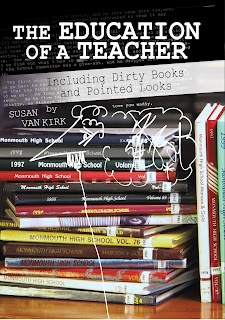 Her thought stuck in my mind, and a decade later I decided to write a book during the later years of my teaching. I began my writing career with a creative nonfiction memoir about my teaching life rather than fiction. My book about those four decades, The Education of a Teacher (Including Dirty Books and Pointed Looks), has sold thousands of copies since it came out in 2010. The “voice” in that book became the voice in my Endurance mysteries, my first series. Grace Kimball, the protagonist, just retired from her high school teaching career in book one. In many ways, she was me.

Now I know I promised you karma, so here it is. After that first book about teaching came out, I received a letter from a student I hadn’t seen in probably twenty years. She had heard about my book, picked up a copy, and felt moved to write me a note. I must say this was a kindness I hadn’t expected. She’d been the first person in her family of eight kids to graduate from high school, something her parents hadn’t done either. Going to college was something she’d never thought of doing. But eventually she did, and now was finishing a PhD. She planned to teach on the college level [and is today.] But she remembered something I’d written on one of her papers in high school.

She’d been part of a group who had to explain something to the rest of my class. No one else wanted to do the speaking, so she did. Afterwards, I had written on her critique, “You have a gift for speaking and teaching. Maybe you should consider being a teacher.” She said I’d discovered something about her that she hadn’t realized herself, and now she couldn’t imagine doing anything else. She loved teaching.

See. Karma. My happy thought that some universal plan is still in place and helping each other keeps it turning.

I believe that teachers influence many students in ways they will never discover. And because one never knows who might be inspired, even if years later, teachers owe it to all their students to believe in them and encourage their development. Even the successes a teacher never finds out about is invaluable.

In my sophomore year of high school Sr. Marie Therese read our stories aloud in class. She read two, then read the first paragraph of mine and stopped. The class clamored for her to continue. I quaked in my seat, certain I'd crossed some unwritten line of horrible story-telling. Sr. Marie Therese announced to the class that she was certain the author of the story would become a writer and went on to explain about hook. I've tried to find her many times over the years to thank her. Unfortunately names of religious changed after Vatican II and I have not been able to track her down, even though the motherhouse. Sr., if you are reading this, thank you, you made a difference.

Words matter. Both the positive words related in Susan's blog and Kait's comments and negative words carelessly or purposefully said.

Love this! Sometimes we think we haven't made a difference and then something like this happens. Karma. Love it!

Great piece, Susan! My kids had some memorable teachers over the years, though one was memorable in a negative way.

I received a phone call from a middle school teacher giving me a tirade about my daughter's "negative BL". I had no idea what she was talking about.

Fifteen minutes later, I learned that "BL" is "body language" and if I didn't know that, I clearly was part of the problem.

Haha! Thirteen year old girls and their BL. It's all in my book.

Thank you, Kathleen. One of the nice side effects of this book was hearing from former students. They were filled with kindness.

What a wonderful story, Kait. What she saw in you came true. I turned that concept around and talked about students who influenced me. It was a passion project. I hope you eventually find her.

You are so right, Jim. In our current crazy world, sometimes I think people have forgotten that words matter.

Thank you, Judy. Words do matter, and often they come back to you, for good or bad.

Thanks, Margaret. The BL in my classroom was most likely sixteen-year-old girls rolling their eyes. I had one in my house too! Like high school students who have either great or horrible high school memories, parents often have the same with teachers. I can't claim any of my own children were hurt by less than stellar teachers, but they were influenced in such positive ways by good ones!

Thank you for this uplifting post, Susan. I can tell you were the kind of teacher that parents and students wanted to have!

One of our friends assumed I was a writer. Before I started writing, he said something in reference to my writing. I was so stunned, I didn't correct him. And then the wheels started cranking...

Thanks for the story, Susan (as usual!).

Ah, Elaine. He saw it in you!! And now we all see what great classes you develop. Thank you.

A lovely post, Susan. It reminds me that our kindnesses often made impressions we never hear about but that are significant nonetheless.

This is a moving testimony to teachers. I can give credit to my English teacher in Junior High School for me eventually being a published author. We were given an assignment and I wrote it.(I had been writing stories and little comic strips ever since I could write--even two "novels" that was 3 or 4 pages handwritten on lined paper.) She singled me out and told the class that I had written exactly what she wanted to see, and asked me to read it aloud! We were to describe something without telling what it was. Our puppy had just died and I wrote a little piece about him running to the top of a hill and smelling dinner. I admit I was influenced by The Poky Little Puppy, but the dog was Skipper. I was SO nervous reading it in front of the class, but, from that day on, I thought of myself as an actual writer. Thank you for being that kind of teacher, Susan!

Thanks, Micki and Kaye.

Hi Susan, Words definitely matter and a teacher's words matter even more. Thanks for sharing this uplifting post. :)

Terrific post. You never know whose life you are going too touch and how people touch of move is.