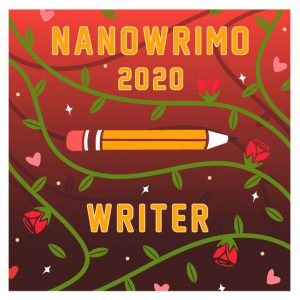 For those unfamiliar with “NaNoWriMo,” the letters stand for National Novel Writing Month, an annual challenge that takes place in November. The idea is you sign up at the website and commit to write 50,000 words, a complete first draft, in thirty days.

The mere thought of that many words in that short period of time has always made me slightly hysterical. Plus I always had a really good excuse for not participating. I was either on deadline for a work in progress, or edits were due, or I was working on an upcoming release… There simply wasn’t an opportunity to focus so completely on blasting out a first draft.

However, I’ve frequently “borrowed from the NaNo energy,” as I called it, to write more than usual. That was my plan for this year as well.

Several of my writing buddies announced they’d signed up. It still wasn’t enough to put myself through the stress. But then two things happened.

First, one of those writing buddies said she was doing NaNoWriMo as a distraction from everything going on in the country. A distraction. Hmm. That might work.

Second, near the end of October, I signed with an agent! And not only for the new series, but for the next Zoe Chambers Mystery too! She’s submitting a proposal based on the first three chapters and synopsis because the book itself isn’t finished.

Which brought me back to NaNoWriMo. While you’re supposed to start a new manuscript at the beginning, I didn’t see any mention on the website about NaNo police. No one would come knocking on my door to see what I was working on. Fatal Reunion, my Zoe WIP, was at 35,000 words and progressing at a snail’s pace. I estimated it would finish out at about 85,000 words. I may not be great at math, but even I can calculate I needed roughly 50,000 words to complete the manuscript.

The universe was speaking to me. And I took the hint.

As I’m writing this, I’m happy to report that I’m on track. In order to meet the 50K word goal, I need to average 1667 words per day. I’ve only missed the mark once, and having anticipated that slow day, I’d written extra words for several days prior.

It’s been easier than I anticipated. I have to turn off my inner editor. I’m using a lot of weak verbs and adverbs just to keep plowing ahead. I’ve hit research speed bumps and learned to type brackets as placeholders until I find the answers I need. And I’ve trained myself to keep pounding the keyboard even when I feel I’ve run out of things to say. Yes, the stuff I’m putting on the page is absolutely horrid. But it’s easier to fix words than to stare at a blank page.

I did NaNoWriMo once several years ago as an experiment because, like you this year, as I looked at my commitments, it seemed doable. It was, and the result after much rewriting is one of my published books.

Would I do it again? Only if a project was at the right place to apply a full-on push to concentrate primarily on writing, I hope you get to “The End,” Annette.

Jim, that's how I feel about doing it again. I've found it enlightening. I can write a whole lot faster than I would have thought. But it really depends at what point in the process you are as to whether 50K in 30 days in November is reasonable.

I did April Nano to speed-write the first draft of my next book. It went well (I was a bundle of energy in early COVID days), though I deviated from my outline at the midway point.

Margaret, that is absolutely true. Since I was partway into the book, I had a good idea of where it was going and was able to outline in some detail prior to the start of the month. I'd also done a lot of the research I expected to need. I've not followed the outline 100% because, as always happens, new and better ideas come up, and characters detour from what we have planned. But it's definitely helped keep me on target.

I did Nano once a few years ago and the result was my first published book. Since then I haven't been in the right place in the process. I have banded together with fellow writers on the first day of other months and participated in out of season Nanos to crank out the words. They were effective. The secret seems to be accountability.

Congratulations on the agent, Annette - and I for one am glad that there is another Zoe Chambers novel to look forward to.

Thanks so much, Kait! And YES to everything you said. I can see doing this again in a different month. Probably with a deadline looming. ;-)

Three cheers to your NaNo progress, Annette. Those of you who take on this challenge deserve all the kudos in the world, especially this year. Keep going. I'm sure you'll get there!

Great way to challenge yourself and freshen your writing techniques. Best wishes for all your work!