“Write what you know.” Attributed to Mark Twain, it’s an adage writers have known for a long time. It’s not “write what you like.” Although maybe it should be. Writing what we know limits us to our on experiences and it limits us intellectually. So, perhaps, our maxim should be “know what you write.” That would encompass so much more in what we can write. But to know what you write, you have to do research. 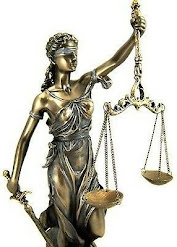 Us authors are not strangers to research. Most of us do a ton of it before we even settle down to write. Before the advent of the Internet, authors often travelled to the places, and did the things they wanted to write about. Today, we have information, and facts right at our fingertips, literally. (Well, it’s only literally if you’re in front of a keyboard). Still, we as writers sometimes take license with facts and maybe that’s just our creativity shining through. And I’m all for creativity. But there is one area where writers pay little attention to the facts that really annoys me. The law.

Sure, in my books I mix fact with my fiction. I research the truth about a matter and write my stories around that. Certainly, there is a possibility that I don’t get it all right. And if I don’t get it right, and you read one of my books and see that, please tell me how I got it wrong. I’m always open to help and critique from others and getting it right. So, with “getting it right’ in mind, I thought I would explain “how it really is” when it comes to a few missteps I often see when writers stick a little law in their stories.

I know. I know. People go to school for three years to learn the law. And many may argue that writers can’t be expected to actually know how legal things actually go. And it’s probably because I am a former lawyer. Because of my training, it sometimes is hard for me to read books that include law that is incorrect. I think the culprit may television.

We know that life isn’t like it is on TV. But too often, when it comes to law, we borrow what we see and incorporate it in our books without doing any more research. In this case, however, it would be worth the time to do the research. But no worries, in this post, I will give you tips on writing law into your books! And I’ve given you a link just in case you’d like to do a little research of your own.

Miranda Rights. Popular law that writers often put in their books is when police arrests suspects. To show this, the dialogue includes Miranda Rights. You know how it goes: “You have the right to remain silent . . .” Most times it’s added for the dramatic effect, I get it. Only this is incorrect law. A police officer will never read a person he is arresting his Miranda rights (think about if you’ve ever seen anyone taken into custody).  And that’s because Miranda rights are only read if a person has been 1) arrested; and  2) is being questioned. Click for Quick & Dirty Law Here. I know that isn’t as much fun as it being said when the culprit is being handcuffed and lead away, but it’s factual. In fact, if a police officer did recite the Miranda to someone they’d just arrested, they’d have to read them again when they sat down to do their interrogation, otherwise the case could be thrown out.

Divorce Papers. When you get married, you have to go in front of an official to make it legal, so guess what? When you undo it, you have to go in front of an official, too! A divorce is a legal proceeding. You cannot just send papers in the mail, sign them, and voilá, be divorced. Just think what kind of ramifications that could cause down the line. What if the papers are lost in the mail? What if the one party never signs them? There are a few ways to get divorced. One way is a dissolution, whereby both parties agree to the property division and sign a separation agreement. But even then, the parties have to go in front of a judge. Why? Because the court has to make sure it wasn’t forged or signed under duress and then it has to certified and filed. You’ll need it on record that it happened. But in most divorces, there is a disagreement (whether it’s one party doesn’t want the divorce or what each party should get in the divorce), which is called a contested divorce. And certainly, a judge is needed in those cases, if nothing more than for a referee. So, please, don’t have the characters in your book stare at the dreaded “brown envelope” laying on the kitchen counter. Because even if they open it up and sign it, they still won’t be divorced! Click for Quick & Dirty Here. So, let your characters go to court! .

The Legal System is Slow. No one in real life goes to trial in a week or two (or three). It is a very, very long process sometimes taking months or years to bring a criminal to justice. Click for Quick & Dirty Here. There are different phases of the trial process, so certainly you can have your villains get thrown in jail, and processed, but arraignment and pre-trial is probably as far as you can get with the timeline in most books. I have read books though that skipped through time to get to a trial. I thought that was a good idea and more factual. Perhaps think about doing that if you’d like to have a trial in your book.

There are No Surprises in Court. A prosecutor or defense attorney is not allowed to spring surprise witnesses or information on the other party. That is called a “trial by ambush,” and is grounds for a mistrial. (Okay, so sometimes witnesses and new information is added, but the court will give the opposing side time to determine what light it sheds on the case and how they can counter it.) But for the most part, what happens is that each side is allowed a “discovery” period where that information is provided beforehand. Sure, information comes up where one side wants to hit home a point made by a witness that has taken the stand, but any new information has to be shown to the other party and approved by the judge before anything or anyone else is allowed into court. Click for Quick & Dirty Here.

Lawyers DO NOT Talk to Each Other During Trial. There is a certain decorum and deference that lawyers have to abide by while in court. They are allowed to speak to the witnesses and with the judge, but not to each other, unless they are at sidebar. So there is no yelling going on between them, no, not even a small conversation. So please, authors, keep your lawyers quiet!

I hope this has all been helpful for the next time you want to include a little law in your story, it surely made me feel better! Do you have a pet peeve? Tell me what bothers you.

I love this, Abby. I spent 21 years as a probate litigation paralegal in Florida with sidelines into trust and estate and estate tax work. You can imagine how many books hit the wall in my office :). The Netflix series Bloodline nearly lost me in the first few episodes when the attorney daughter kept rattling on about her father needing to sign his Will so she could file it with the Court within the prescribed time. ACK. No. A little bit of research could have saved some of my hair. In Florida we file the Will within 10 days of DEATH. And that only happens if the original is handy. Judges don't stress over late filings of Wills.

Thank you for letting me get that off my chest.

I have one thing to add to your post - if you are writing about legal events in a certain state, check their laws because they do change from state to state and they can be quite different. If you are in doubt about where to find the information, check the state's Rules of Civil Procedure (or similar name, the title may vary by state, too), or call a Court Clerk or public information officer with a local PD and identify yourself as a writer looking for information, not free legal advice.

very helpful! When I attended the local Cincinnati citizen's police academy, I never got a straight answer about searching a car after the police pull people over. "It depends."

I did learn how to execute a speeding ticket during my ride along.

What about moral indignation a la Perry Mason? I used to love those, and then someone in the crowd stands up and confesses. Yeah--probably not. Thanks, Abby, for busting our ignorance even if it reads well.

Our legal system is hard to master, sometimes even for attorneys who have gone to law school for three years and often worked as interns. It's easy to believe misinformation, but as authors we should take the time and trouble to either do research ourselves or ask questions.