An Interview with Author Libby Klein by E. B. Davis

I HAVE REFORMATED THIS BLOG FOUR TIMES. BLOGGER IS NOT DOING ITS JOB. EXCEPT FOR THESE FEW LINES, NO OTHER LINES WERE CAPITALIZED IN MY BLOG. IF BLOGGER WANTS TO CHARGE IT SHOULD DO SO--NOT DESTROY BLOGS. E. B. DAVIS

It's vintage Poppy McAllister when the gluten-free baker and B&B owner tries to solve a murder at a Cape May winery . . .

When Poppy and Aunt Ginny agreed to host a Wine and Cheese Happy Hour for a tour group at their Butterfly House Bed and Breakfast on the Jersey Shore, they never anticipated such a sour bunch. Grumpy guest Vince Baker should be in a better mood—he’s filthy rich and on his honeymoon with his much younger wife Sunny, who seems to dote on him almost as much as her high-spirited teacup Pomeranian, Tammy Faye Baker.

But the honeymoon is over when Vince drops dead the next day touring the Laughing Gull Winery. Turns out he's been poisoned, and it seems like everybody on the tour is hiding something. Now Poppy has to put her gluten-free baking on the back burner and bottle up her feelings for the two men in her life while she charges after a bitter killer with a lethal case of sour grapes . . . 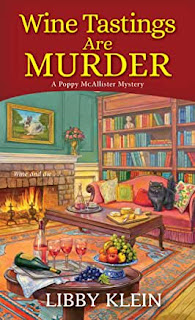 Whatever you do, don’t read this book when hungry. Libby Klein’s descriptions of blue cheese-stuffed bacon-wrapped dates; toasted baguette slices infused with orange olive oil, topped with half a fig and goat cheese; and chocolate mousse tartelettes will induce you to buy out the gourmet section at the grocery. Wine Tastings are Murder debuts on December 1. Don’t say I didn’t warn you.

Murder, mayhem, and chaos are typical at the Cape May B & B and in that milieu, Poppy must decide between beaus. Will she choose Tim, her high school sweetheart or Gia, the kind Italian? Meanwhile, Aunt Ginny and her cohorts are up to something that involves muscular aches and pains, stupefying Poppy, who observes them sitting on bags of frozen vegetables. And then, erroneous alerts and answers to unasked questions spout from Zalexa, the new electronic gadget gifted to Aunt Ginny.

The Poppy McAllister mystery series is a joy to read. In comparison to Poppy’s dilemmas, your stress level will deflate.

Do you own an Alexa-like devise? Have you developed a satisfactory relationship with her yet or does she make you want to swear? Does she embarrass you in front of guests?

I have several Alexas. We have a love hate relationship. At least once a week I check on a timer to hear her respond that there are no timers set - when I know I clearly set a timer. She drives me crazy with her selective hearing. She hasn’t embarrassed me yet, but she is often used against me as a fact checking resource. I need to find a way to program her to agree with me when she hears my husband’s voice.

Tim creates a sign for his restaurant Maxine’s in the form of a female crab named Maxine. Is Tim aware that the crab has attributes of a woman that isn’t Poppy? I don’t think he is. Tim is very focused on making his restaurant successful and he’ll do whatever it takes to draw people in. He is a good example of how we can get tunnel vision and miss the cues around us that something is off.

Why doesn’t Aunt Ginny want to marry her beau Royce? Aunt Ginny has been married five times. She’s not ready to give up her free-wheeling lifestyle and settle down again. Her days of sharing the remote and doing a man’s laundry are behind her - at least for the time being…

Poppy reacts when Tim says he wants her to work for him every day. Poppy reacted to “everyday.” I reacted to his use of the word “for.” Wasn’t theirs supposed to be a partnership, like their relationship? They were always going to be equal partners, in business and romance. A lot of time has passed and they’ve had a few bumps along the way to finding out if they have a future together. It’s possible that we see both of them reveal a side to their true feelings in the use of those words you’ve pointed out. It’s something they’ll have to overcome if they’re meant to be together. 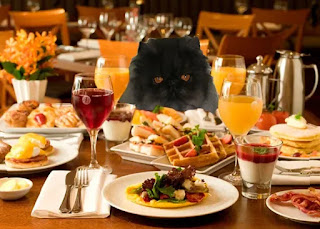 Victory, Poppy’s new chambermaid, passed three requirements to get the job. What were they? She
was available. She had a valid work visa. And she wasn’t spooked away by Aunt Ginny and Figaro’s antics. That last one is harder to pass then you might think.

Are cliques now squads? Why the change in terminology? Cliques exclude others from being a part of the group because they aren’t good enough or cool enough to be friends with. A squad is your group of best friends, but you’re also open to having new friends join the group.

Figaro keeps Poppy on her toes. Does your cat play head-games with you? How do you know for sure? My cat is very naughty. She keeps finding new and creative ways to get what she wants. Her newest trick is pressing the buttons on an air purifier next to my bed until the beeping wakes me up. The first time was a happy accident. Every time after that has been carefully calculated to annoy me.

Birthday boobs? And what might they be? That’s when a rich girl gets breast implants for her 18th birthday. I think I got a diaper bag.

There are TSA dogs in Hawaii that sniff for fruit? Yes. Absolutely. Illegal fruit? What is illegal fruit? Customs is very strict about what you can take on and off the island. How do they train the dogs to sniff fruit without eating it? I have no idea, but I’d love to know the answer to that. How do they differentiate between fruit and illegal fruit? Maybe they go to fruit trafficking school and sniff contraband papaya all day. I don’t think you can take fresh fruit onto or off the island with the exception of Dole pineapple. Maybe they spray that with something to make it safe. We’ll have to ask the dogs to be sure. 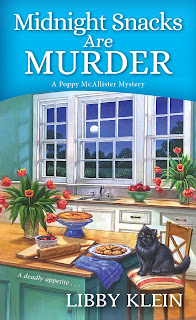 Poppy doesn’t react well when Gia hires a young redhead to work the coffee bar. Does she really think Gia will trade her in for a newer model? Poppy’s self esteem is tenuous at best. She’s making great strides in self-acceptance, but a younger, skinnier red head would be a challenge for the strongest of egos.

I grew up going to Ocean City, NJ for vacation. Is Morrow’s Nut House still around? It was there last year. I didn’t get to visit this year because of the pandemic, so I don’t know if Covid has made any drastic changes to the area landmarks. I hope everyone has weathered the storm. I ordered ingredients from a few places in Cape May to put in my recipes for the next book so I’m doing my small part to keep them around.

Guests named Baker check into the B & B with a teacup Pomeranian named Tammy Faye. Which is bigger, Figaro or Tammy Faye? Figaro is bigger than a teacup pom. Which animal is innocent? Neither.

Sunny Baker looks like a gold digger. She’s much too young for her husband. She’s a stay-at-home wife. But when her daughter-in-law and social media lifestyle bogger, Zara, gang up on Sunny, she defends herself well by saying, “I thought women fought for the right to make their own choices in life and not have someone else tell them how they should live.” I felt like applauding Sunny. Is judging Sunny harshly too easy? You’ll have to decide that for yourself. No one is one-dimensional. The characters in my books are rarely what they seem. I hope they surprise you.

Is there a bridge to Cape May? There are two bridges. One from North Cape May that leads to West Cape May, and one at the end of the Garden State Parkway – Exit Zero. Cape May is a man-made island. 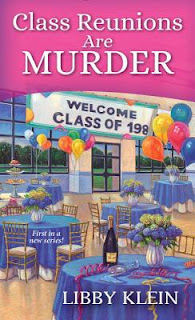 Victory has uniform problems, but that’s not her biggest problem. Why does Poppy find Victory asleep all the time? Victory has narcolepsy. That was not mentioned on her job application.

I think we all have had cheerleader problems. Did you? I definitely did. The cheerleaders were the mean girls in my school. That’s not to say that I have a bitter grudge against all cheerleaders. My daughter and granddaughters were cheerleaders, and they were wonderful. I think people are individuals. Bullying and shallowness are not caused by pompoms, but they sure ran rampant in my small neck of the woods.

Who really said, “With great power comes great responsibility”? Uncle Ben. A character in Spider Man. You can ask Alexa. She’ll tell you.

Why does Poppy’s best friend Sawyer think Poppy is cursed? Because it’s not normal to keep finding murder victims. Don’t Google this. Just take my word for it.

What is keto flu? The temporary detox effect of your body kicking sugar and going through withdrawals from a lack of simple carbohydrates. You feel like you have the flu for a few days. The more sugar you are used to eating before you cut it out, the worse you feel while you adjust. It’s like drinking four cups of coffee a day then cutting out caffeine cold turkey. I get terribly loopy after a vacation or holiday when I go back to no sugar.

Even though Poppy’s high school nemesis (cheerleader) turned detective Amber wants to keep the suspects together by having them stay at Poppy’s B & B, surely Poppy should be able to charge them. Why does she take on the burden and do it for free? Amber can’t make them stay anywhere they don’t want to stay unless they’ve been officially charged with a crime. The detective saying, “Don’t leave town” is only a thing in television and movies. Poppy is trying to garner a little good will with the police by working with them to provide a way to keep the suspects in town during the investigation. Free lodging at a beach B&B would be hard to pass up. And no one wants to make themselves look suspicious by refusing the generosity.

I was so happy with the ending until you dropped the bomb. What is next for Poppy and Aunt Ginny? So many delightfully horrible things. Beauty Expos Are Murder comes out next summer and it picks up moments after Wine Tastings ends. You’ll get to see how Poppy handles the men in her life, and whether or not she chooses to move forward with romance.