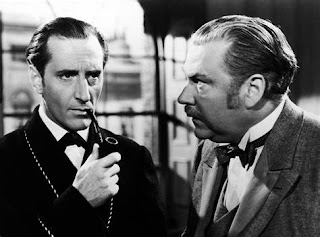 “When you have eliminated the impossible, whatever remains, however improbable, must be the truth.”

Who said it first? 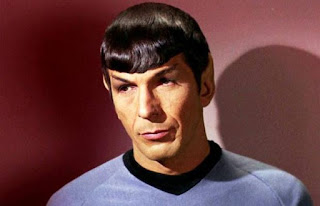 Spock delivered the famous line not once but twice: first in Star Trek VI: The Undiscovered Country (1991) and again in Star Trek (2009). But the saying was around long before Spock, so it wasn’t him.

The quote is often attributed to Holmes who indeed couched the most common phrasing:  “How often have I said to you that when you have eliminated the impossible, whatever remains, however improbable, must be the truth?” (Sign of Four, 1890). But he didn’t think it up.

Harriet Vane set Lord Wimsey right in in “Strong Poison” (1930) when he mistakenly attributed the quote to Holmes. She pointed out to him, correctly, that it was Dupin who first expressed the concept in Murder on the Rue Morgue (1841) by Edgar Allan Poe.

For my money, Murder on the Rue Morgue is the seminal work in crime fiction. We have inherited so much from this story’s structure. The narrator is the sleuth’s sidekick, a device adopted by Arthur Conan Doyle and Agatha Christie. The story opens with a discussion of mental process of analysis, with examples from chess, checkers and whist, a very Sherlockian scene before there was a Sherlock.

To refresh your memory, the daughter was choked to death, had bruises in the shape of fingers around her throat, and was stuffed up a chimney upside down in a locked room. The mother’s body was found beheaded in garden behind the house. Duplin reads in the newspaper about the grisly murders of a woman and her adult daughter and learns that a friend of his, to whom he owes a debt, has been arrested for the crime, establishing his personal interest in solving the crime, a device so common that its uncountable.

The beauty of crime fiction is that we can borrow these set-ups, tropes, and story structures from prior writers and then make them our own in our stories. There are many tropes we have borrowed from this story:

2.         An amateur detective with disdain for police who competes against them to find solution.

3.         The first expression of a rule of fair play. Dupin excludes magic as solution, a concept that became the second of Knox’s Ten Commandment adopted by The Detection Club.

4.         The first red herring: the delivery of large amount of cash in gold three days before the murder.

8.         The first couching of the impossible/improbable trope: “They have fallen into the gross but common error of confounding the unusual with the abstruse. But it is by these deviations from the plane of the ordinary, that reason feels its way, if at all, in its search for the true. In investigations such as we are now pursuing, it should not be so much asked ‘what has occurred,’ as to ‘what has occurred that has never occurred before.” (Granted, Conan Doyle’s phrasing is more memorable.)

Readers and writers: Do you have favorite trope not listed here? Do you know where it came from? Share with us!

Posted by Keenan Powell at 4:00 AM

The police and local college administration request assistance from my amateur sleuth, but it works both ways. She has her own reasons.

I imagine another author has used the same trope. It's not what others have written, it's how an author creates her main character.

I always thought it was a Sherlock Holmes original!

Edgar Allen Poe was certainly a creative genius, a basis on which we all can build.

Margaret, it's tricky isn't it justifying why an amateur sleuth gets involved in an investigation. In my second book, Maeve's involvement isn't related to a case. Instead, she's a family friend who is begged to take action when the police are indifferent to the disappearance of a young mother.

KM, Poe was a genius! He didn't write that much crime fiction but he left us with so much inspiration!

Very interesting post, Keenan. The tropes we have become accustomed to seeing are being overdone. One that I see so often in cozy mysteries is the developing romantic relationship between the amateur sleuth and the detective. I tried to avoid it in my series, but my characters won't listen to me. I tried.