Finding the Story You Have to Tell 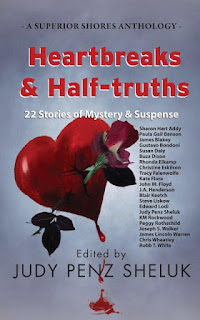 Earlier this month, KM Rockwood posted a message about her love for short stories and about writing “Burning Desire,” the first story in Heartbreaks and Half-truths, a new anthology edited and with a story by Judy Penz Sheluk (Superior Shores Press), available June 18, 2020. Yesterday, in the Stiletto Gang, I gave a short summary of each of the anthology’s stories, including my own, “Living One’s Own Truth.”

My journey in writing the story is different from my previous work. Usually, I start out with a clear idea of who the narrator is. I thought I’d discovered her when, in response to the call, I began with the image of a daughter raised by her embittered and abandoned mother to be a heartbreaker. I could hear the daughter’s voice explaining how her mother, a stern classics teacher at a 1931 boys’ school, tortured the students and encouraged the daughter to concentrate on using her looks rather than her brain. I sensed the daughter resented this manipulation and acquired limited knowledge to rebel. When a new teacher arrived, a handsome fencing instructor who appreciated both the daughter’s mind and body, she was ready to run away with him. However, his ultimate aim was to use her against her mother. I kept trying to determine how the daughter was going to turn the tables on this beau/betrayer.

Only, I couldn’t figure out how she would manage it. She was intelligent, but being so limited in focus and experience made her self-absorbed. She had known manipulation, but she had no capacity for reversing it except by using her beauty, which didn’t work. The story stopped moving forward.

I could still hear the daughter telling about her upbringing, but I realized that she needed someone to listen to her and perhaps consider her best interests. At that point, I discovered there was another teacher just waiting in the wings to hear the daughter out and show her some sympathy. That new teacher became the narrator of and a key player in the story.

Before Covid 19 redirected our lives, I had hoped to attend Louis Bayard’s class on writing historical fiction at Yale University this summer. In fact, I had submitted the opening scene of this story as my writing sample for admission.

In a way, writing this story and learning how to confirm and incorporate historical accuracies was a good substitute for the class (although, I still would like to take it, if it is offered again). Did you realize that the punctuation in Emily Dickinson’s poetry as she wrote it differs from that in the later published versions? Because my story took place in 1931, I had to use the punctuation in the earliest printing rather than the 1955 version that was greatly edited.

Part of my story involved the sport of fencing in the Olympics. I researched when women competed in fencing and learned about the spelling of the fencing gear. Judy and I had discussions about sabre vs. saber.
Some of my initial research about the Framingham Normal School in Boston introduced me to the institution’s founding president Cyrus Pierce. His quote, “live to the truth,” led to the story’s title.

Are you looking for a great summer read? Please let me recommend Heartbreaks and Half-truths. Each story interprets the theme quite differently. There are computers, science experiments, PIs, and just regular folks from different time periods experiencing and reacting to love and loss. And, in each story, part of the fun is uncovering what is hidden. The secret you think you know may be a different truth altogether.

Do you enjoy reading short stories? I hope so.
Posted by Paula Gail Benson at 11:39 AM

Impressive, Paula. The list of authors reads like a Who's Who of short story masters. Looking forward to having Heartbreaks and Half-Truths with me on my trip from FL to ME. Sounds like the perfect accompaniment for a week on the road.

I do enjoy reading short stories and don't do nearly enough of it!

That's an impressive list of contributors. Paula, you're in amazing company! Congrats!

Thank you, Paula, this is such a great write up. I'll be sharing it. And I truly loved your story. It was one of the first to make my long list.

I enjoyed this, Paula--well done! Looking forward to seeing the anthology!

I'm fascinated by historical fiction, and I've made a few stabs at it. Research is essential, and I ended up spending many fascinated hours wandering through a small town newspaper's archives, and visiting museum reconstructions. Wonderful and fun, but not particularly efficient!

Congrats, Paula! Best wishes for the success of the anthology.

Kait, thank you. I hope the anthology is a good traveling companion for you. I know it has a Maine story from Kate Flora.

Annette, isn't it a great group of authors? I feel privileged to be among them.

Judy, thank you. You're leadership has been exceptional.

John, thank you for stopping by! I enjoyed the characters and plot twists in "Blackjack Road."

Kathleen, you're right. Research can take you down rabbit holes you don't need to travel, but it does add to the story if you get it right.

Thank you, Jacqueline. So good to hear from you.

Congratulations, Paula--and to all of the other talented authors! I can't wait to read this anthology.

Writing historical fiction has its challenges and rewards. It sounds like you really pulled it off!

Thanks, Carol. I hope you enjoy the anthology.

British Dissertation Consultants provides Sociology Dissertation Services for sociology topics. With the expertise from our in-house sociologists, we provide the best assistance to students in the UK.