I Swore I Wouldn’t Do It Again

I swore I wouldn’t, and I lied. Not to someone else. To myself.

How sad is that?

I had the pleasure last week that all novelists know. I typed “THE END” on the first draft of a novel. It’s a major step in completing the publication path, but a fleeting joy because first drafts need massive amounts of work before they become published books. 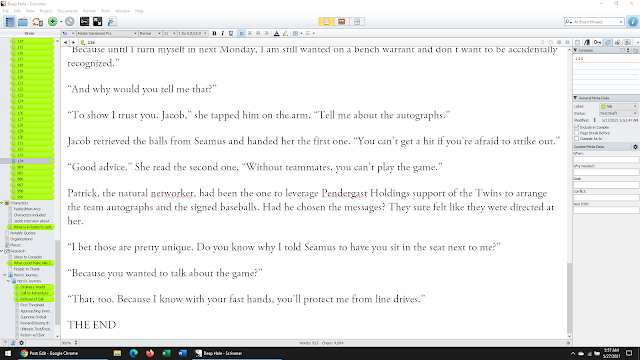 My problem did not come with finishing the draft; it came three days earlier. That’s when I broke my self-made promise. Before we get to that, let me explain how I create novels. I begin with something that interests me. Often it’s a crime, but it could be a personal conflict, or a location. This time, I was angry at corporations that deliberately structure their business to maximize profits and then walk away from their environmental disasters, leaving a corporate shell with few assets. What would happen if Niki (my protagonist who works undercover) had to infiltrate and shut down domestic terrorists of a different stripe who took revenge on the corporate executives—blaming and shaming and in a few cases by killing them?

It’s the second book in the series, so I chose Niki’s “helpers” from the first book’s secondary characters. I created a cast of bad guys, one of whom, unbeknownst to the others, was the killer. Those bones were more than enough to get me going because I don’t (er, can’t) plot my stories. To discover the plot, I must write them.

Here’s where the promise to myself came in. The day I typed “THE END” for the previous book’s first draft was also the day I changed which character had masterminded the crimes. I’ve joked that if I’m surprised at who done it, readers will be too. The problem is when you change the bad guy at the last moment, it requires a lot of rewriting in the next draft for the story to work. That’s when I promised—pinky-swore, right hand to left—that in the future, I would know who “done it” by the middle of the first draft.

Which I did until I changed who the killer was three days before I typed “THE END.”

I love my revised choice. But not only did I break my solemn oath, I gave myself more work to complete the second draft. I suppose I should look on the bright side: this time I had three days of writing during which I knew the bad guy’s identity. That’s progress, right?

I swear I’ve learned my lesson, and I will not make that mistake again. Next time, I’m not promising anything.

You just need to stop making those promises to yourself. Your process may mean more rewriting, but it works!

So many ways to write a book, so little time. The longer we write, the more we realize we all do it differently. You’ve obviously found your way, so stay with it.

Hysterical, Jim. I'm with Annette - your process works for you. Work with it.

All I could think of was "Hang Down Your Head, Tom Dooley. Hang down your head, I say.".... at least, you are, each time, able to raise yours again with a more perfected manuscript in hand.

We all have a process and yours works well for you.

When I reached the end of the first mystery I wrote (which shall deservedly remain forever in a box in the back of a closet) I realized I had been wrong all along about who had committted the murder.

We do surprise ourselves sometimes.

Must be an exciting new culprit, Jim! Congrats on finishing your draft!