Winspear's The Consequences of Fear 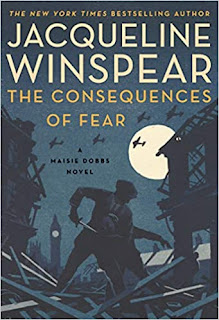 From the 2003 publication of Jacqueline Winspear’s first Maisie Dobbs book, I’ve been a fan. At age thirteen, Maisie is an early twentieth century version of Sara Crewe, living and working in service in the London home of gentry. When Lady Rowan Compton recognizes Maisie’s intelligence, she arranges for private tutoring enabling Maisie to gain admission to Girton College, Cambridge.

Maisie is a field nurse during World War I, and then trains under her mentor as a psychologist and investigator. Winspear’s sixteen books take Maisie through the twenties, thirties, and early forties, when Maisie joins Britain’s Special Operations Executive (SOE), vetting British agents for

Winspear’s latest book, The Consequences of Fear, is set in 1941 London. Maisie’s life is fraught with fear—for her adopted daughter Anna and her parents, and her cobbled-together “family” of friends and colleagues, including her trusted assistant, Billy Beale; Robert MacFarlane, her SOE supervisor; and an old Scotland Yard colleague, DCS Caldwell.

As a young teen, Winspear’s father was recruited as a runner by the London Air Raid Precautions depots. Winspear gives her father’s job to twelve-year old Freddie Hackett, who delivers messages during early evening bomb raids. Freddie witnesses a murder in an area destroyed by bombs:

“…he saw two men ahead, illuminated by a Bomber’s Moon and falling incendiaries. He didn’t like what he saw—there was shouting, and then the men were struggling, hanging onto each other, fighting, and he didn’t want to run into trouble. This blimmin’ bombing was trouble enough.” (p.4)

“And as he ran, his legs pumping like pistons in the bowels of a ship, Freddie Hackett knew that he had to tell someone about what he’d seen, because he was sure it wasn’t his imagination. He couldn’t keep this to himself. He had to do the right thing, like his old grandad used to tell him….” (p.10)

Maisie’s efforts to help Freddie and his family are complicated by politics of the SOE and Free French forces in London. She enlists the aid of a retired intelligence officer who provides vital information about the actions of French army soldiers in Syria following World War I. With the help of her assistant, Billy, and the police, Maisie unravels a murder caused by these Syrian events.

Maisie lives with fear and its consequences:

“Taking a seat on a bench, Maisie closed her eyes, feeling another weight—that of doubt settling inside her as it prepared to take up residence, ready to sap her energy, slow her mental reflexes and bring down her defenses against that most powerful of emotions…Fear, she thought, had a viscous quality to it, to the extent that you could even feel it in your feet as you were running to the shelter; a burden slowing you down, despite the fact that you were moving as fast as your legs could carry you. Fear was sticky, like flypaper, something to steer clear of as you went about your business, because if you were sucked into that long banner of worry, you would be like an insect with wings adhered and feet stuck, never to escape. Fear was the scariest of emotions and it nestled there, growing ever stronger and sprouting shoots, a seed in the fertile soil of doubt.” (p.165)

Though Maisie travels to Scotland and to her home in the Kentish countryside, and risks confrontations with both a vicious drunkard and a man she suspects is a murderer, this is a contemplative book, set in London the months before America enters the war. Maisie’s SOE job is evaluating candidates as intelligence agents in France, sending many of them to certain deaths. London and many other industrial cities and ports still suffer frequent bombing, food shortages have started, children who have been evacuated are returning to half-empty city schools.

The book ends in early December, when Maisie’s American lover assures her, “You aren’t holding the fort alone any more. You’ve got company coming—at last.” (p.336)

I can’t wait to read Winspear’s next book, probably set in 1942 England. What will Maisie do next?

Readers and writers, have you read Winspear’s Maisie Dobbs books?

Posted by Margaret S. Hamilton at 1:30 AM

I have not and definitely need to rectify the situation.

I’ve read several, but a long time ago. This is a series to get back to.

An new addition to a series I love! Going right to my TBR pile.

Annette, Susan, and Kathleen: thanks for checking in. A new Maisie Dobbs book is always cause for celebration.

Thanks for the review, Margaret. I just started listening to the audiobook version. The narrator does a fabulous job with the books. She sounds just like I would expect Maisie to sound. This is a fabulous series--one I can read and listen to time and again. There is a Facebook page called, "What would Maisie do?"

Great idea, Grace. I'll have to get my hands on the audiobook.

These books sounds fascinating. Definitely on my TBR list!

Kait, the character arc is wonderful: Maisie as a child, a WWI battlefield nurse, a psychologist/investigator, widow, and mother, now working for WWII British intelligence.

Thank you for sharing about this series. I'm always looking for a new one.

Vicki, thanks for commenting. It's a series I've loved from the first book.

Margaret,
I've read all of the Maisie Dobbs books. Loved them all but I found the last one a bit plodding. And then I listened to THIS TIME NEXT YEAR WE'LL BE LAUGHING, JW's autobiography read by Jacqueline Winspear. I absolutely loved it! She talks about her parents' lives and her own early years growing up in rural Kent. As a Maisie Dobbs fan, you can see where JW got so much material for the series.

Marilyn, I have Winspear's memoir on my TBR pile. Thanks for the recommendation.

I love Maisie and her adventures. It warms my heart to hear about new readers of Winspear’s series. I just finished Sujata MASSEY’s latest Perveen Mistry Book 3 in a doctor’s office. She mentioned the cover looks like Maisie Dobbs’ books! BINGO. The same talented cover artist. Thanks for a great review, Margaret.
Beth

Beth, thanks for dropping by. The covers of the Maisie books have always been distinctive and yes, I see the resemblance to Massey's books.

Crazy, I know, but that book was the first of hers I read! And loved it. Am now making way through #1 and plan to binge the next 13 until I'm caught up. I only skimmed your post so I wouldn't know what's in Maisie's future. I have NO idea how I missed out on her until now.

Edith, thanks for commenting. I love books set in England between the wars, so starting with the first Maisie book was a natural for me. My favorite characters are Priscilla and her French niece.