How Dark Academia Inspired My Latest Novel By Samantha Downing 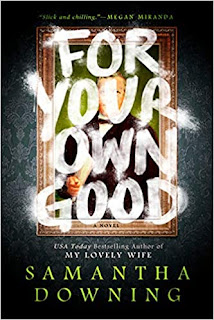 When I think of Dark Academia novels, I think of eerie-looking schools draped in ivy and secrets. Two major storylines have dominated this sub-genre for years. The first is a group of students who, either by accident or design, have done something terrible. This awful thing turns into a secret that eventually comes back to bite them. The second major storyline is about a predatory teacher, often a man but not always.

Which is not to say these books aren’t good. In fact, many are excellent. Donna Tartt’s The Secret History remains one of my all-time favorites.

When I started thinking about where to set my third novel, Dark Academia was not on my mind. What I wanted was for it to be different than my other books. The first, My Lovely Wife, had been set in a suburban community, and the next one, He Started It, was about a group of siblings forced to go on a road trip. I wanted to move outside of the family but I also wanted it to be a place people could relate to. High school seemed like the perfect place.

Most of the time, school is one of the first places where kids have a lot of interaction with adults who aren’t part of their family. As they become teenagers, they learn—by trial and error—how to deal with people of different ages and backgrounds. Sometimes they’re good at it, other times not, and a few won’t try at all.

At the same time, teenagers have to deal with parents, coaches, possibly employers. They are surrounded by adults, most of whom want them to act a certain way at any given time. Learning how to navigate through all of this is part of growing up.

So what happens when one of the teachers is a little…off? Not a sexual predator, though. A sociopath.

What happens to the kids then?

That’s the question I wanted to answer in this book. What happens to a kid who ends up with a sociopath for a teacher? What does he learn, how does he react, and what if he becomes a target?

Just like that, For Your Own Good became a Dark Academia book.

Teddy Crutcher has just been named Teacher of the Year at Belmont Academy, a private school with a lot of wealthy, entitled kids. Teddy has a problem with a student named Zach Ward, and through Zach we see the student’s perspective. He’s trying to deal with what Teddy is doing to him, along with pressures from his parents, from his friends, and from other teachers. Zach shows us what it’s like to be a student at Belmont.

The idea that someone like Teddy could be a teacher at any school—public or private—is terrifying to me. The truth is we don’t know a lot about the people who teach our kids…until it’s too late.

Samantha Downing is the author of the bestselling My Lovely Wife, nominated for Edgar, ITW, Macavity, and CWA awards. Amazon Studios and Nicole Kidman's Blossom Films have partnered to produce a feature film based on the novel.

Her second book, He Started It, was released in 2020 and became an instant international bestseller. Her third thriller, For Your Own Good, will be released in the US on July 20, 2021.

She currently lives and works in New Orleans.

What do we learn -- and why in the same situation does one person learn one thing and another learns an entirely different lesson -- are interesting questions in a country where we can agree on very little, including what are facts.

Toss in a sociopath teacher to a teenager's life, and you have an intriguing story, I'm sure. Congratulations on the forthcoming publication of your third novel.

Welcome, Samantha. I got chills just reading ABOUT your new book! I suspect the actual book is one I won't be able to put down!

A scary thought. Teachers can have such an influence on a teen's life, for good or bad.

Congratulations on your upcoming release! I celebrate the excellent teachers my kids had, and bury memories of the terrible ones.

Such a dark and frightening premise....and all too real. Best of luck on the book.