The Veiled Lady by Lee Falk: A Review by Warren Bull

The Veiled Lady by Lee Falk: A Review by Warren Bull 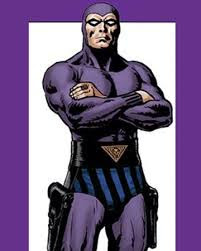 Image from fandom.com
The Veiled Lady is Lee Falk’s original story about The Phantom. It is number 4 in a series the comic strip creator, Lee Falk, wrote for Avalon Press in 1973.  I probably should have started with Number 1. Unfortunately, that book is rare and expensive. The plot of The Veiled Lady is not particularly engrossing: A damsel in distress, threatened by monstrous insects needs to be rescued. In my opinion, variations on the theme have been done better.
The female character is not a dishrag. She has skills. She is a crack shot, an unarmed combat master, and she has a Ph.D. in biology. On the other hand, she screams and faints at regular intervals, when the hero is available to rescue her.
The action is fairly well described although I found it hard to believe that The Phantom could extinguish hot lava that splashed on a character by slapping it with his hands. The bad guys die satisfactorily. One man is redeemed. Good triumphs at the end.
The cover art is fun and appropriate for the subject. Note: Apparently, the cover artist was not overly fond of bras as women’s apparel.
It did bring interesting questions to my mind. I wanted to know why over four hundred years of sons following their fathers in the role of The Man Who Cannot Die, AKA, The Ghost Who Walks, AKA The Phantom, none of the sons ever decided to trash the costume and pursue a career as a plumber or a bartender. And did the Phantom and his wife ever have daughters? Or more than one son? What did they do? Apparently, for more than four hundred years women became enthralled with the concept of giving up civilization in favor of living in a cave. I am willing to accept that African pigmies could be wonderful friends and emotionally supportive. Still, the women would have to be real environmentalists.
I think reading this series might be a fun way to pass the time, but I don’t suggest starting with The Veiled Lady.

thanks for your review. Interesting.

Doesn't sound like something I'd like to read. With so many wonderful books available, certainly more than I'll ever be able to read in my lifetime, I see no point in reading things that don't really appeal to me.