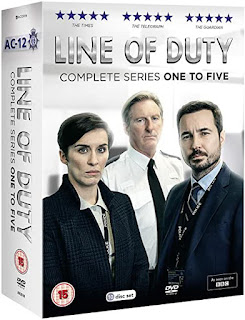 
As we finished watching five seasons of Line of Duty, we needed to find a new series on DVD from the Cincinnati-Hamilton County library system. I checked the Acorn and BBC websites, cross-referenced the library catalogue, and ordered a stack of DVDs. The second week of March, they were my last pickup before the library system closed. 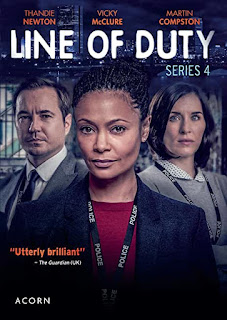 Line of Duty first appeared in 2012, with five seasons broadcast and a sixth in production. After the character-based Vera and Shetland, my favorite British crime show. Superintendent Ted Hastings runs the Birmingham Anti-Corruption Unit 12, assisted by DI Kate Fleming and DS Steve Arnott. The show has character and plot arcs within each season and over the entire series. Hastings is an experienced officer determined to identify the bent cops at every level of the police force corrupted by organized crime. Kate is a talented and versatile officer assigned undercover to squads under investigation. Steve is a sneaky, snide, and self-serving officer who battles his way through investigations, determined not to give up. Fast paced, with flashbacks to earlier seasons. During the last episode of each season we end up in a tension-filled interrogation room. Who’s on which side? Was the evidence corrupted? Who’s the mysterious “H” and what officers in the upper ranks are protecting him/her? Why am I shouting “No, he’s lying!” at the TV? 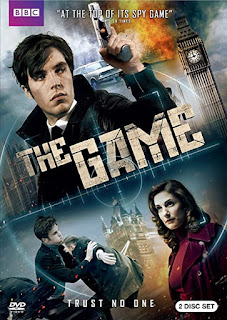 The Game (2014), is a BBC spy thriller set in 1972 London. “Daddy”, the head of MI5, the British domestic intelligence agency, assembles a crew of agents he trusts to investigate a KGB defector and information about Operation Glass, a plan to activate Soviet sleeper agents. During the six episodes, we careen between believing the agents are patriots to watching Daddy ferret out the mole in his operation.  First rate plot and acting, everybody smokes, and the seventies clothes and hair are hilarious. 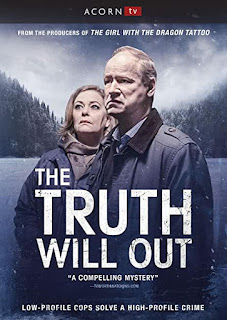 The Truth Will Out (2019) is a Swedish noir production. Peter Wendel is tasked with forming a cold case unit to investigate a notorious serial killer who may still be at large. He assembles a ragtag band of feuding officers and one inept civilian, determined to identify the real culprit and his copy-cat killer. Excellent. 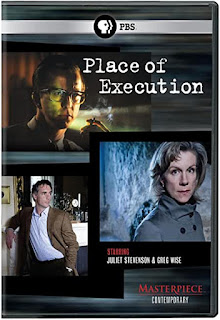 Place of Execution (2008) is based on Val McDermid’s novel. Teenage Alison Carter goes missing from a Derbyshire village. DI George Bennett dogged pursues the killer and succeeds in sending him to life in prison. Forty-five years later, a documentary film maker descends on the village, not realizing her interviews will lead to something far more sinister. Excellent.  McDermid’s trademark plot has echoes of Shirley Jackson and Tryon’s Harvest Home. 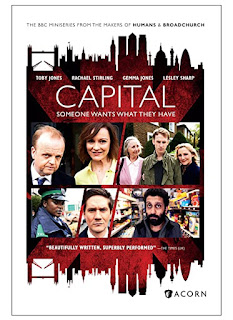 Capital (2015) is a satiric film based on John Lanchester’s novel, set on Pepys Road, a posh residential street in London. A wealthy banker and his over-the-top wife and their nanny in one household; a Zimbabwean traffic warden; a family of Pakistani immigrants; a young artist, his mother and grandmother are perplexed and disturbed by postcards they receive stating “We want what you have.” Some characters are more sympathetic than others, the Pakistani grandmother flies in to take charge, and life on the street becomes the “new normal.” Hilarious and touching.


Readers and writers, do you have a favorite British crime television show?

Wonderful recaps, Margaret. I love Brit TV - a favorite show - nope, I love them all!

Line of Duty is one of my top ten favorites for sure. Two others that I LOVED are the Australian series WANTED, and the (I think British) series PLEASANT VALLEY. Both terrific crime shows that are not all doom and gloom. Some of the British ones I can't watch as all the characters are unhappy, the lighting is dark, and the music gloomy and depressing. I found all the shows that I love on the wonderful Facebook Page, I Heart British TV. Great discussions about various shows and series and if you ask a question sometimes as many as 30 people respond!

Thanks so much for posting this as you've mentioned a couple I was unaware of!

I enjoy the lighter British crime shows, although I occasionally watch darker ones like Vera. This season, I've been enjoying Shakespeare and Hathaway, Death in Paradise, Midsomer Murders, and Pie in the Sky.

Grace, I like humorous and darker, though a little Welsh noir goes a long way. Have you seen Rosemary and Thyme? The garden settings are fabulous, and there's always a body.

My husband and I also enjoyed Jack Irish, Margaret.

I go along with Grace. Midsomer Murders and Death in Paradise. Both on PBS stations around here.

Margaret, I've enjoyed Rosemary and Thyme, but it hasn't be showing recently on my local PBS stations.

Kathleen, I've seen every episode of Midsomer Murders, some more memorable than others. My fav is "The Creeper."

Grace, I'll have to take another look at Death in Paradise.

I absolutely love, love, love Keeping Faith on Acorn TV. Two series. Welsh noir. Have watched it multiple times and am eagerly awaiting the third series, which was being filmed before the coronavirus lockdown. Faith is a solicitor whose husband leaves for work one morning and vanishes. Things go seriously downhill from there.

Also, if you like Adrian Dunbar, check out Blood, also on Acorn TV. He's an Irish country doctor whose wife dies under mysterious circumstances. Things are not what they seem and our hero is not as nice as people think.

Adore Line of Duty and Happy Valley. Also check out Wanted, which is an Australian series on Netflix. Two women waiting at bus stop witness a murder, wind up with a bag of dodgy cash that all the criminals want and they are seriously on the run.

If you really want dark, The Fall on Netflix. Gillian Anderson in Belfast looking for a serial killer.

Also just watched The Victim on Britbox. Very good. A court case and we ask ourselves, who is the victim here.

I loved Keeping Faith! The Victim sounds intriguing. Thanks for sharing your recommendations.

Loved Line of Duty and Place of Execution.

Susan, thanks for your input.

I love British murder shows. Have yet to see the ones you talk about, Margaret, since I don't have Acorn, but I both read and saw Place of Execution on PBS. Val McDermid is one of my favorite writers.