She was wearing a black wool overcoat, mid-calf-high boots. Her hair was brown,
parted on the side and cut even with her mouth, her face pale from the cold.
She looked as if she could have been the Prada version of the Grim Reaper,
but I wasn’t sold on her facts of the case.
Abby Collette, A Deadly Inside Scoop, Kindle Loc. 1152

Recent MBA grad Bronwyn Crewse has just taken over her family's ice cream shop in Chagrin Falls, Ohio, and she's going back to basics. Win is renovating Crewse Creamery to restore its former glory, and filling the menu with delicious, homemade ice cream flavors—many from her grandmother’s original recipes. But unexpected construction delays mean she misses the summer season, and the shop has a literal cold opening: the day she opens her doors an early first snow descends on the village and keeps the customers away.

To make matters worse, that evening, Win finds a body in the snow, and it turns out the dead man was a grifter with an old feud with the Crewse family. Soon, Win’s father is implicated in his death. It's not easy to juggle a new-to-her business while solving a crime, but Win is determined to do it. With the help of her quirky best friends and her tight-knit family, she'll catch the ice cold killer before she has a meltdown...
Amazon.com 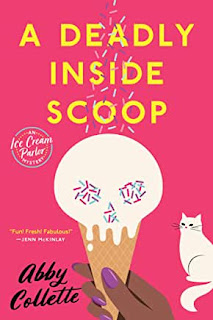 Abby L. Vandiver, writing as Abby Collette, has done it again. She’s created a new series that is as compelling to read as her Romaine Wilder or Logan Dickerson cozy series. The action is set in the newly remodeled family ice cream store, which her main character, Bronwyn (Win) Crewse, is managing while creating its product.

Win is a young, talented, and capable young woman born into a family of ice cream makers and medical men. And it is all about family to Win whether making the family ice cream store a success or defending her family members against unfair and unjust charges.

What is a Pumpkin Roll? A race? Many of the streets of Chagrin Falls are on an incline and N. Main Street’s is pretty steep. So in real life at Halloween, people stand at the top of the hill and roll pumpkins down it. Of course, they break on the way down making a mess in the street. The fictional grandfather in A Deadly Inside Scoop isn’t too keen on it, and from what I understand it’s mostly young people who participated. 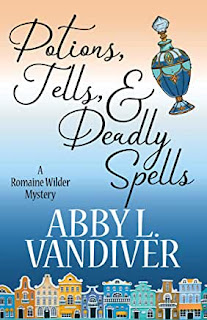 You were a lawyer by profession, and yet, many of your characters are in the medical field. Do you have relatives who are doctors, dentists, or nurses? Actually, I wanted to be a doctor for much of my life. I have a minor in Biology as I’d almost finished my undergraduate in that area before I switched over to Economics.

Win’s mother’s name is Ailbhe. How is it pronounced? Ailbhe is an Irish Gaelic name and in Irish legend is the name of a female warrior. In my book it is pronounced “Al-be,” although the Gaelic pronunciation may be different.

After getting an MBA and working in NYC in PR/Marketing, Win came home. Why? Win came home because she was homesick. She’d also had gotten a little sick and she wanted her father, who is a doctor, to be close. In fact, everything was going good in NYC—no boyfriend or job problems—and ***spoiler alert*** in the next book, A Game of Cones, her job even tries to recruit her to come back. But as you can read in A Deadly Inside Scoop, the Crewse family are a tight-knit group and Win just couldn’t stand being so far from home.

Win thinks her dad is much like his dad, her PopPop. But Win’s dad thinks his father is grumpy. Would he be surprised at Win’s assessment? No! PopPop knows he’s grumpy. Win perhaps thinks he’s that way on purpose, that’s why she tries to get him to be more cooperative. Of course that doesn’t work.

Why does Win decide to investigate? Win decides to investigate because the police are zooming in on her father as a prime suspect in the murder of Stephen Bayard. Win feels that if she doesn’t help to clear her father, he might just end up exchanging his green scrubs for an orange prison uniform.

I agree with Ailbhe. Win is thoughtful, systematic, and careful. But her investigation is less than systematic. Is this lack due to Maisie? Lol. I’ve heard that Maisie is over the top in some early reviews. Maisie’s personality is based on a good friend of mine, Molly, and I’ve think I must’ve captured it well. So, I’d say yes, some of it is due to Maisie. But Win is not so systematic because she’s a reluctant sleuth and doesn’t know what she’s doing. It’s all new to her. But stick around, Win will get the hang of it. 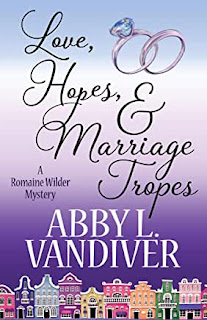 Maisie jumps to conclusions. She’s impetuous, but she also has good instincts. Why doesn’t she stay in a job for long? Is she hyperactive? Yes, Maisie is certainly hyperactive. She has trouble finding something she can stick with. The reason why will come out in later books. Maisie is also excited to do what she’s seen done so many times in many of her favorite television shows, and it’s hard to keep her enthusiasm contained.

Win and Maisie have an interesting debate about whether the MO indicates a male or a female perpetrator. What’s the debate about? What is succinylcholine? A quote from A Deadly Inside Scoop: “Women, when they commit murder like to use poisons and heavy objects. Men like guns and knives.” That was from Maisie, and she derived that assumption after watching her television shows. Win doesn’t think anyone can find a murderer from watching TV. Succiylcholine, as explained in the book is a muscle relaxer that is used as part of a lethal injection, but in controlled environments, is used in surgery.

I was surprised that Win didn’t ask O for more direction in the case. Why is she resistant to O? Win is independent. Plus, she’s running a business and has no time for dating. She’s reminded often by Maisie that O wants more from her than she wants to give, so she steers clear of him.

How can PopPop love ice cream, but doesn’t like cream in his coffee? Many people don’t like all the derivatives of cow milk. I, like PopPop, drink my coffee black, but am a lover of ice cream. 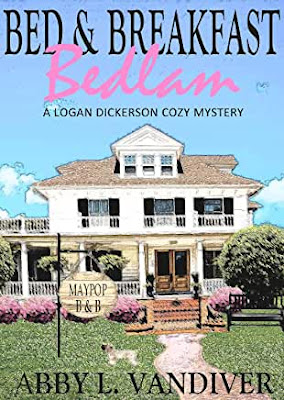 What is it about sitting in a parking lot that attracts Ailbhe when she’s feeling low or depressed? Like mentioned in the story, sometime you have to just “be still.” But, Ailbhe’s sitting in parking lots was fashioned after me. I do that often when I’m worried or depressed. I can’t tell you why, it just calms me.

Rivkah lives on the second floor of the ice cream shop. Her cat, Felice, seems to live mostly in the shop. Does Rivkah let her out every day to roam? How did Felice pick out the window seat fabric? Felice does what she wants, sometimes without Rivkah’s knowledge. She is referenced as Her Royal Highness! Felice picked out the fabric with a point of her paw.

How often does ice cream need to be replaced for selling? Win’s ice cream doesn’t last long because it sells well. But normally, the shelf life of ice cream in a freezer is 2-3 months.

Riya Amacarelli has weird and violent personality flips making her physically dangerous. But, she is also a doctor. What is her practice? And could this put her patients in danger? Riya’s anger is not totally out of control, and she’s working to keep it better under control. It does not put her patients in danger, in fact, I don’t think, and neither do the people in the book think, she’s dangerous. In their words, she has a bad temper, which many people do. Riya is a general practitioner and works in the emergency department.

How can Win and Maisie possibly eat Cheetos and drink Cotton Club Cherry Strawberry soda for breakfast? Because it’s good! Junk food, in this instance, is good for brainstorming.

How does the frozen cart work? Is it electric? There are many ways to keep a cart frozen and all of them are too technical to talk about in a cozy mystery. But, the gist of it is that some carts can be plugged in to get them cold, then can be unplugged and put on the move like you see at carnivals and amusement parks. You can also use cold packs or a refrigeration system. In A Deadly Inside Scoop, Win is inside where plugs are easily accessible so her cart could work just like a kitchen freezer.

What’s next for Win Crewse? You’ll have to read A Game of Cones, the next book in the series to find out! 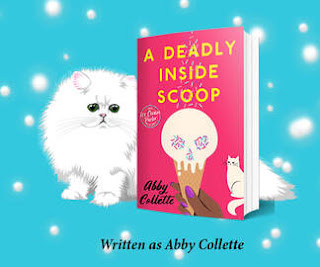