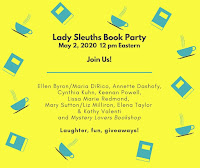 My third book, Hemlock Needle, was released on March 31, 2020. Because of what is going on, all my events were canceled. and I was sad. What I needed was a virtual event where authors could interact with readers in real time, like a book release party. I wanted fun, spontaneity, and an opportunity to sell books. I contacted a few of my friends, for a broader draw of readership, and everyone one of them said yes. Before I knew it, seven authors had agreed to appear, and the Lady Sleuths Book Party was born.

The program ran three hours with approximately thirty minute segments and no breaks. (I’d toggle off my camera so no one knew I was sneaking to the restroom after each segment got going.) Some authors chose to interview each other and talk directly to the audience, who posted  questions in the chat room and in the Q&A window. Some authors did short readings and then I talked with them. One author talked directly with the attendees.

If you want to take a look at it, here’s the link. You probably need to register to watch it, but no big deal. It’s free. https://www.crowdcast.io/e/lady-sleuths

I went on Canva and worked on a couple of ideas for graphics and circulated them. Granted, they are vulgarly cheerful but they got attention. We ended up with 192 registrants. That’s amazing. I created a Facebook event page and boosted that. I posted it in on my Instagram page. I did a graphic for each of the authors with their picture and most recent release and then posted that on the Facebook event page and my Instagram page together with their bio. I scheduled these posts ahead of time to be released every other day on Buffer. I also sent out a notice in my newsletter as did several authors.

Liz Milliron contacted Mystery Lovers Bookshop. They set up a special page for our event listing each authors’ books which I linked directly to from the event screen. Each author gave away a small e-gift Mystery Lovers Bookshop certificate during their panels to commenters and we had a grand prize winner who received a $120 gift certificate at MLB. They also promoted us on their website and in their newsletter.

We had fantastic involvement from the audience. The chat room was lit up with comments and questions the entire event. Before it was over, there already had been 30 clicks through to the MLB buy link. People were still in the chatroom commenting after the event was over.

I took a look at Zoom and Crowdcast and decided to go with the latter. Crowdcast is more expensive than Zoom, but there are several advantages. First, you don’t have all the attendees on screen at the same time so no one person is dominating the show – you’ve all been to that panel. The attendees are in a chat room. You can invite them on screen if you want. Second, Crowdcast’s Pro subscription includes one live stream so I live streamed the event to Facebook. Even though I’m technically challenged, I clicked all the right buttons and it worked. Third, you can set up a “call to action button,” which is where I put the buy link to Mystery Lovers Bookshop. Fourth, it automatically records so anyone registered can go back for a replay. Fifth, you get analytics – a list of the attendees, where they signed up from, who was the most engaged in the event.

Sixth, you can post polls. Seventh, Crowdcast automatically sends reminder emails to all the attendees before the event. Eighth, you can send emails to the attendees after the event. Immediately after, I sent out an email thanking them for making it such a successful event and listing all the winners. A day after that, I sent out an email with a list of all our websites if they were interested in signing up for newsletters.

I did a couple of webinars for my law office beforehand to get accustomed to the technology. I plan to maintain the subscription so I can do both webinars for the law office and readings to promote my books. For the webinars, I don’t register attendees because I don’t want people talking about their cases in public, but I did livestream it over to my attorney Facebook page and received an immediate response from people who had noticed it. It’s amazing how many people are just scrolling through Facebook looking for entertainment. I plan to also do readings without attendees and stream them over to my author Facebook page.

It was fantastically time-consuming, but I think it was a big success. The authors had a lot of fun. And I got emails and comments throughout the weekend from attendees about how much fun they had.
Posted by Keenan Powell at 12:00 AM

Great idea and congratulations for pulling it off! Enjoy your day.

Thanks for posting this, Keenan! I joined the event about mid-way through and enjoyed it thoroughly! I don't know if I'll try it myself, but now I know what to do.

Did you hear about the poor woman who was participating in a Zoom conference on her phone, and who thought the only person who could be seen was the one talking? She unfortunately decided to use the bathroom, taking her phone with her so she wouldn't miss anything.

Congrats on getting this done, Keenan! It's sure a tough time to release books. KM, I'm glad that wasn't me! That poor woman. OTOH, someone flushed a toilet during a Supreme Court session. THE Supreme Court! We can all be forgiven after that.

Keenan - what a fantastic idea! I missed the event, but I'm going to checkout the recording.

KM, I saw a clip of that which was one reason I decided to use Crowdcast instead.

I saw it, Keenan, and I thought you did a fantastic job. I believe the live sessions will become the wave of the future, so we all should become familiar with this type of technology. We won't be able to put this Genie back in the bottle now that people have become accustomed to seeing authors and friends online.

Grace, absolutely! Readings and interactive events both will be the wave of future.