The Definition of Insanity by Annette Dashofy

The definition of insanity is doing the same thing over and over again and expecting a different result.

There’s some argument over whether this quote really originated with Albert Einstein, but whoever came up with it is brilliant. I, on the other hand, am clearly insane.

I always believe that no matter how crazy busy I am right now, in six months I’ll have tons of free time. So when someone approaches me with an enormous project for some future date, I think, “Sure. I’ll be done with whatever is keeping me occupied right now and will have plenty of spare time by then.”

Back in September, I was approached about teaching an online class for Pennwriters sometime in 2020. To be honest, I will do anything for Pennwriters because I owe them.

I wouldn’t be published were it not for my tribe there. And I’d been giving a lot of thought to teaching some online classes. The decision to do it wasn’t the issue. The issue was when. I broke out my crystal ball (which should be smashed with a sledgehammer because it hasn’t worked from day one) and did some calculating. I knew my tenth book was due in early February. I assumed (and we know the quote about “assume” too, right?) it would be released about eight or nine months later, as the others have. This would be the last book on the contract, so no looming deadlines for a while. I chose June for my workshop.

I’d have lots of free time in May to plan and in June to teach.

My publisher decided to accelerate the publication date for Til Death and set the release date for June 16. Which means ramping up the marketing plan in May and all through June.

At least my lifetime of insanity has prepared me. I’m multitasking like mad. And my face-to-face launch events aren’t happening, so I don’t have to deal with travel on top of everything else. I’m working on my class plan and writing lectures in the afternoon, writing guest blogs in the morning, and keeping a very detailed work calendar.

(There’s also a new book in the works, but more on that another day)

Speaking of Pennwriters, our annual writer's conference was to be this weekend, wrapping up as you’re reading this. 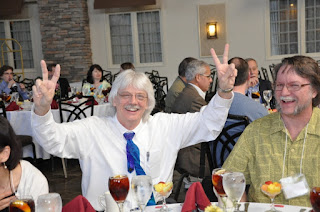 Sadly, like all the other gatherings, it’s been canceled. Pennwriters is a volunteer organization and our conference coordinators and committee put in a tremendous amount of work, planning what would have been an incredible weekend. Not only does my heart break for them, but it’s a hit to our budget. The conference is one of our main income sources. And that’s why I’m foregoing my cut of the take for the online course I’m teaching. As I said, I’ll do anything for Pennwriters.

Including groveling. If you’re interested in taking a month-long online writing class about Creating a Cast of 3-Dimensional Characters for only $49, register now. I’m not making a cent from it, but I still hope to enlighten, inform, and entertain everyone who signs up.

In the meantime, am I the only one who miscalculates how much I’ll have on my plate six months from now? Is there anything you keep doing while expecting a different result?

Thanks, Margaret! I'm having a lot of fun putting the lectures together!

Fortunately, you are an organized professional who will get everything done on time. Your blog reminds me of the old saying, "Mortals plan and God laughs." Or something like that.

Grace, YES. I always say, "Want to make God laugh? Tell him your plans for tomorrow." Never has it felt so true as this year, right?! And yes, I'll get it done and on time. I always do. Another good saying: "If you want to get something done, ask a busy person."

Sounds like a great class, Annette. If anyone can pull it off, you can!

My mom used to say, "Man proposes, God disposes." All I can say is Amen. I think we got our crystal balls from the same manufacturer.

How generous of you to donate your share of the funds to Pennwriters. I've heard many different things about the group.

About the only thing I can say concerning my schedule, six months from now or any other time, is that I know it will not be what I expect.

Kait, I think we should have received a recall notice!