Hitting a Homerun on Inspiration by Nicole Asselin

Well, we made it through week 4306586 (does time even matter anymore?) of social distance and isolation. Congrats everyone!

One thing I miss is baseball. Probably not surprising since my debut cozy mystery is titled Murder At First Pitch. It is set in the fictional world of an independent league baseball, located on the South Shore of Massachusetts. Luckily, my second book was completed (and currently in edits) before the quarantine. I’m not going to lie, creativity has been a little lacking for me since we locked down. Usually I have the Red Sox games to keep my creative juices flowing, but now there is nothing.

The first book in the Ballpark Mysteries was written exclusively during the historic Red Sox baseball season in 2018. I used the team as inspiration and found myself loving to write during summer days out on the deck with Joe Castiglione (voice of the Red Sox) on my radio.  This year, with no sports on, I’ve found it harder to get into the headspace of my own fictional baseball team.

A breakthrough came this week when ESPN began airing Korean Baseball League games. It’s a surreal experience to watch baseball when I wake up at 5:30 in the morning, but I found it helping me get new ideas and finding more inspiration to write. For those who don’t know, the Korean league is a little different from the majors. They have a cheerleading dance team, which performs on the dugouts between innings. Even with no fans in the stadium, there are plenty of people watching on the computer, and they love all the pageantry.  It’s something I hope the MLB brings to the season if/when they start.  And I know I will be putting some of the fun things I’ve seen into future books. 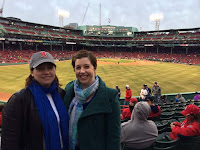 For some people, writing is a quiet time of reflection or introspection. For me, writing is a way to put my passions on paper. Baseball has been one of my passions for a long time now, and I can’t wait for it to come back. Until then, I can retreat to the world of the Abington Armadillos to get my baseball fix in.

Nicole graduated from Curry College in Milton, Massachusetts, in 2004 with a degree in English/Creative Writing, minoring in Dance. Now working in just outside of Boston as a technical writer, she lives on the South Shore of Massachusetts with her three cats Julia, Jacques, and Madeline. Nicole is a current member of Sisters in Crime (National and New England) and the Mystery Writers of America. She sits on the Board of Directors for the NE branches of both groups as Social Media Liaison.