A young chef might bite off more than she can chew when she returns to her Alaskan hometown to take over her parents' diner in this charming first installment in a new cozy mystery series set in an Alaskan tourist town.

When Chef Charlie Cooke is offered the chance to leave San Francisco and return home to Elkview, Alaska, to take over her mother's diner, she doesn't even consider saying no. After all--her love life has recently become a Love Life Crumble, and a chance to reconnect with her roots may be just what she needs.

Determined to bring fresh life and flavors to the Bear Claw Diner, Charlie starts planning changes to the menu, which has grown stale over the years. But her plans are fried when her head cook Oliver turns up dead after a bitter and public fight over Charlie's ideas--leaving Charlie as the only suspect in the case.

With her career, freedom, and life all on thin ice, Charlie must find out who the real killer is, before it's too late.
Amazon.com 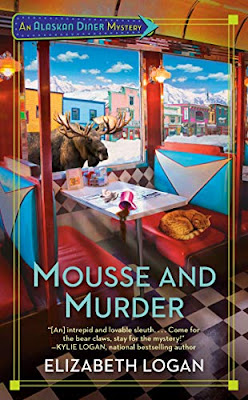 One look at the cover of Mousse and Murder by Elizabeth Logan and you’ll see the of many reasons I was attracted to this book. A cozy diner surrounded by snow. A curled-up cat. I grew up in the era of Mr. Moose (Captain Kangaroo) and will always have a soft spot for the beasts, but the name of the diner, the Bear Claw, cinched it. They are my all-time favorite pastry. Enough about me and my idiosyncratic attraction.

Elizabeth Logan’s main character, Charlie Cooke, is a likeable character, who is hard on herself. She’s failed at law school. (Who cares?) She’s failed at love. (Everyone does.) She’s a cook who employs a cook and fights with him. (Two cooks in one kitchen?) She solves the murder of her chef. (Clever) But I have to admit, when Charlie tries to improve on the perfection of a bear claw, she went a step too far.

Moose and Murder was released by Berkley Prime Crime yesterday. The second book in the series, Fishing for Trouble, will be released in November. Please welcome Elizabeth Logan to WWK.                            E. B. Davis

Elizabeth Logan is a pseudonym. Would I know your other work? What names have you written under?
Thanks for asking, Elaine. Sometimes I think I’m in Witness Protection! My birth name: Camille Minichino (The Periodic Table Mysteries). My “Miniature Mysteries” pen name: Margaret Grace. My Professor Sophie Knowles Series pen name: Ada Madison. My Postmistress Series pen name: Jean Flowers.

Is Elkview, Alaska real or based on a real town?
Made up! It’s situated near Talkeetna, a town well known as a staging area for ice climbers headed for Denali.

Are you an Alaskan native? 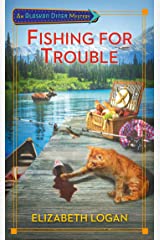 No—from far away in Boston, Massachusetts!

What’s the difference between sleet and freezing rain?
Sleet is a mixture of rain and ice pellets. Freezing rain is liquid droplets formed by rain at below freezing temperatures.

Is moose meat often substituted for beef In Alaska?
Yes, moose meat and elk meat. Elk jerky is especially popular; a recipe is included in MOOSE AND MURDER.

Why do they study musk oxen? What are they trying to discover?
As with all animal studies, scientists look for patterns that might help understand human behavior.

Does the qiviut fiber from the musk ox stink?
The consensus I’ve found says no, the qiviut fiber does not smell musky like the animal.
Why do most Alaskans have a chart of sunrises/sunsets for every day and city in the state?
I think it’s because the patterns are so different from the lower forty-eight, and for some the growing seasons are greatly dependent on the patterns. It’s the reason a 100-pound cabbage or pumpkin can be entered in the Alaska State Fair contests.

How was Charlie’s cat named? Is he really the mayor of Elkview?
Benny is short for Eggs Benedict, a diner favorite of course. The feline mayor was Stubbs, mayor of Talkeetna at a time when there was no winner from the human voting!

Benny, her cat, comes to Charlie’s emotional rescue often. Why does she have an electronic feeding station with camera/audio and game apps?
As owner and manager of an eating establishment, Charlie works long hours. The apps give her a way to connect until she gets home.

Why does Charlie hire a cook, Victor, at double wage rates when she could do the cooking herself?
A manager has many responsibilities beyond cooking—finances, inventory, legalities, and so on. She needs someone who will take on full-time cooking so there’s always a backup for the frontline. 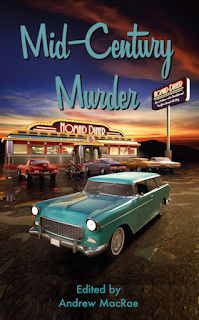 Why does Charlie call Arnold, Steve, and Dave—Manny, Moe, and Jack?
The names were from a popular tv commercial, men who hung around together as did the truckers who patronized the Bear Claw Diner.

Why is the diner open 24/7?
Most diners that are roadside stay open for the all-nighters, especially tourists and truckers.

Why does no one drive a white car in Alaska?
Not no one, but many who live in the snowiest areas want a color that is a contrast to the snow.

What is birch syrup and how is it used? Does it taste like maple?
Birch syrup is obtained the same way as maple syrup, but is stronger, used for meats rather than waffles.

Other than being twenty-one, are there no other requirements for gun ownership in Alaska?
There are restrictions for a felon.

What Panhandle? Florida?
The area in southeast Alaska, with Juneau (the capital), and Sitka is called the Panhandle.

What is Seward’s Day?
Honoring William Seward, Secretary of State from 1861 to 1869, who negotiated the purchase of Alaska. Seward’s Day is the last Monday in March.

What is an Alaskan property called a 0 bed/0 bath?
A “dry cabin,” is a single room, sometimes with a loft, with no plumbing! They are usually listed as 0 bed/0 bath (though there is often an outhouse J ).

What is a Gamow bag?
A portable hyperbaric bag used to treat altitude sickness. It simulates descent of thousands of feet, and alleviates the symptoms.

Is there really an app for calling the animal control people in Alaska?
Fiction! As far as I know.

What’s next for Charlie?
There’s trouble in the fishing industry and Charlie is there to help! (Fishing for Trouble, Book 2 in the series, November 2020 release.) 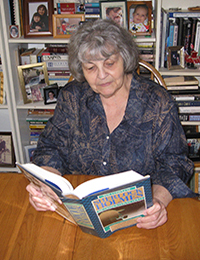