You're Invited! Lunch with Barb Goffman and Shari Randall 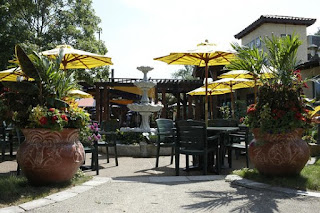 SCENE: A small table on a sunny patio outside a Mexican restaurant. (You know this is
a fantasy because Barb would never eat outdoors--flying insects within a 100-mile
radius always know when she tries to eat outside, and then they come to bother her.
But we digress. ...)

Chips and salsa are on the table. A margarita (for Shari) and a Coke (for Barb) are at
the ready.

WAITER: What can I get you ladies?

SHARI: She will have the steak fajitas. (Shari nods at Barb.)

BARB: And she will have the fish tacos. (Barb nods back.)

SHARI: No. We just know what we like. (She winks at the waiter.)

They clink glasses as the waiter leaves.

SHARI: So nice to see you, Barb!

BARB: You, too. We've all missed you down here in Virginia since you moved to
Connecticut. Our loss is New England's gain.

SHARI: I miss you all, too. But living in Connecticut has made it so much easier for me
to write my series.

BARB: I bet. Who better to write a cozy mystery series involving a lobster shack than a
woman who lives right near the beach? Your first two books in the series came out in
2018, right? CURSES, BOILED AGAIN!, which was your debut mystery, came out in
February, and AGAINST THE CLAW came out in the summer.

SHARI: A reviewer told me that they’re like Murder She Wrote – with lobster rolls.

BARB: What made you make your main character an injured ballerina? Allie Larkin's
such an unusual cozy protagonist.

SHARI: Three reasons. First, I love a fish out of water story (no pun intended). Second, a
dancer looks at people differently, especially their body language – that helps Allie in
her investigations. Finally, I wanted a character who could believably do her own stunts
to get herself out of all the dangerous situations I get her into.

BARB: It works! Your books also involve a lot of food, especially lobster rolls. How do
they fit into the plots?

SHARI: You wouldn’t believe what some people will do for a lobster roll – or a secret
recipe.

The entrees arrive and the ladies dig in. 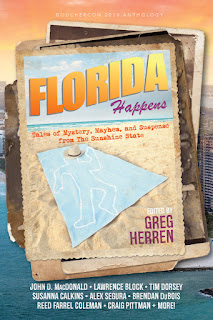 BARB: I did. "The Case of the Missing Pot Roast" appeared in FLORIDA HAPPENS,
which was the 2018 Bouchercon anthology. It involves, as you can imagine, pot roast.
The main character is Bev, who retired with her husband down near the Everglades.
The story opens with her thinking: "Looking back, I should have known something was
wrong when the pot roast disappeared." But Bev has bigger problems that distract her
... to her detriment.

SHARI: I'd say so. Did I hear correctly that the story was originally supposed to involve
a missing cat?

BARB: Yeah, but it would have been too dark a story. I wanted to make it funnier and
cozier. So instead of a missing cat, we have a missing pot roast. (Anyone interested in
reading "The Case of the Missing Pot Roast" can read it by clicking here.) 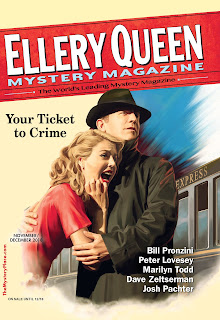 BARB: Yep. "Bug Appétit" was published in the November/December issue of ELLERY
QUEEN'S MYSTERY MAGAZINE. This story is set at Thanksgiving. A con man has
finagled himself an invitation to a rich girl's home. He hopes to steal her jewelry after he
fills his stomach, but he's so focused on his goals that he misses some important
culinary details that may derail his plans. (Anyone interested can read "Bug Appetit" on
my website by clicking here. )

SHARI: Given the title, I doubt I'll spoil the story for most people if I say it involves bugs.
Though I might spoil some appetites. 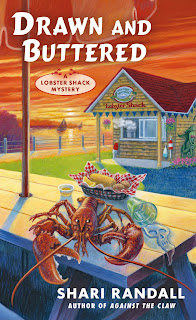 BARB: Indeed. But the story is funny, not gross. At least that's what readers have told
me. Speaking of funny, your third book, coming out next month, involves a funny
subplot about a missing gigantic lobster.

SHARI:  DRAWN AND BUTTERED drew on a lot of things that fascinate me – old
cemeteries, the secrets of college fraternities, Halloween - I’ve been dying to set a story at Halloween – and I just had to throw in a giant lobster.

BARB: How big was it?

SHARI: The largest lobster ever caught was 44 pounds and about three feet long. The one in my story is just shy of that. It’s a monster – perfect for Halloween.

BARB: In addition to your Lobster Shack mysteries, you had a short story published last spring. "Pet" appeared in CHESAPEAKE CRIMES: FUR, FEATHERS, AND FELONIES.Your main
character is a young Russian immigrant who becomes the caretaker for an uber rich
woman's dog and gets mixed up in murder. The story has a noir feel--different from your
cozy novels. What made you write it? 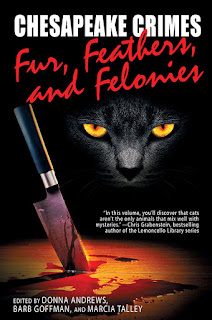 SHARI: I was inspired to write “Pet” after a visit to the fabulous Hillwood Museum in Washington, D.C. Hillwood was the home of the Post family (of cereal fame). I started wondering what would happen to a naïve young woman who forged a friendship with someone that wealthy. It was lots of fun to write something so dark! I have to say, your animal choice for your story in FUR was surprising.

BARB: I like writing stories that surprise people, and few people see exploding cows coming. But while I hope "Till Murder Do Us Part” makes people smile, readers should know that the cow explosions aren't gratuitous. They play a role in the police-procedural murder mystery involving a man who rents out his barn for weddings.

SHARI: What's next on your plate?

BARB: I have a flash short story, "Punching Bag," scheduled to be published sometime
this month at the ezine FLASH BANG MYSTERIES. And in the spring I'll have a story
about a woman on trial for killing her husband in DEADLY SOUTHERN CHARM: A
LETHAL LADIES MYSTERY ANTHOLOGY. It's called "The Power Behind the Throne."
What's next for you?

SHARI: I’m working on a Christmas novella about the Lobster Shack characters. And a
launch party is in the works for DRAWN AND BUTTERED. Stay tuned!

BARB: Well, I will definitely have to make it out for one of your book events. And then
afterward, we can go out for more Mexican food.

SHARI: Margaritas for everyone!
Posted by Shari Randall at 12:00 AM

Congratulations to both Shari and Barb on upcoming releases and thanks for inviting us to your virtual lunch!

Thank you, Margaret and Kait - I wish we could make it a real lunch!

Lunch sounds great--congratulations to both of you.

Such a clever little story! Thank you for giving me a mid-morning pick-up.

Hi EB and KM - wish we were all on that sunny patio together!

Thanks, everyone, for stopping by. Shari is such fun to have lunch with. And who doesn't like Margaritas?

What a fun story. I wish it were real and I could have joined the two of you.

Enjoyed this so much!