I Can See Clearly Now

I’ve worn glasses and/or contacts since I was 8 years old. I remember being amazed at what I’d been missing even back then. Our living room carpet had a design to it! I’d never realized!

In the (many) years since then, I’ve dealt with new prescriptions on a yearly basis. Fuzzy vision made clear by new glasses. Last summer, with six months to go before my annual eye exam, I noticed a drastic decrease in my eyesight. When I was finally eligible (according to my insurance) for a new checkup, the diagnosis startled me. My script hadn’t changed. I had cataracts.

Being an overachiever, I couldn’t simply have the usual cataracts though. In addition, I had posterior subcapsular cataracts. And I had wrinkled retinas.

Cataract surgery, which I’d always known would be in my future suddenly became imminent. It would take care of both types of cataracts—two of my three issues—with the hope that the wrinkled retinas weren’t a major source of my vision problems.

On December 13, I went in to have my left eye done. Everyone told me how easy and safe the surgery was. How thrilled I’d be with the results. How easy the recovery was.

I was still terrified. They were cutting into my eye. Would I be aware of the procedure? How much pain would I be in afterwards? With only one good eye, would I be able to see to write between surgeries? I mean, I have a deadline for revisions coming up SOON. I can’t afford to be half-blind for four weeks. (Note: Do not schedule cataract surgeries around the holidays.)

Hubby called off work to take me to the surgical center. The prep took what felt like hours. The staff applied rounds of drops into my left eye while I sat in a room with the queue of waiting patients. Some were having their second eyes done and offered sage advice to those of us who were having our first. One by one, they took us back to pre-op where I had an IV started and spoke with Dr. M and the anesthesiologist who assured me all would be well. I would be in a twilight state and may or may not remember the surgery.

Let me tell you, I was firmly in the may NOT category. I remember being wheeled into the operating room. Next thing I knew, a nurse was asking me if I wanted a snack. (The answer was yes.)

I remember Hubby driving me home. I had on the not-so-stylish dark sunglasses they’d given me. And I could SEE. For the next several days, I’d cover one eye, then the other, and marvel at the difference. Not only could I see without glasses, the difference in colors was amazing. My lace curtains were still white! I’d thought they’d gotten dingy and discolored. Blues were BLUE instead of purple. 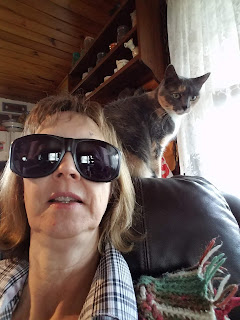 I know of several friends who are having this surgery in the coming months, so let me tell you a few things that are normal. Light sensitivity. Pain when looking at the computer (or any) screen. Halos, starbursts, streaks…all normal and will go away in time.

The post-op surgical pain wasn’t bad at all. As a long-time contact lens wearer, I can say it felt like having a dry contact in. Except you can’t take it out. The eye drops I heard so much about (many people told me they were the worst part) were soothing. I looked forward to each application.

For me, the worst part was the (insert expletive deleted of your choice) hard plastic eye shield I had to wear at night for the first week. “Don’t sleep on your left side or put pressure on the left eye,” they warned me. My sleeping position of preference is my left side, so the only way I felt confident I wouldn’t end up mashing my new eye was to “sleep” in the recliner. For a week. When I received the all-clear to ditch the eye shield and sleep however I wanted, I was never so overjoyed to face-plant in my pillow in my bed.

As for my concerns about being able to work, no problem. I have rearranged my desk so that my screen is farther away (I needed to sit VERY CLOSE before the surgery). If I wear my contact in my right eye, all I need are my cheap drugstore readers for perfect close vision.

One other thing they don’t warn you about is the between surgery issues. Without my right contact, my left eye works too hard resulting in monster eyestrain headaches. WITH my right contact, I can see okay, but it’s like my brain is receiving mixed messages. My depth perception is off, and I feel a little like Jack Elam. Remember him? 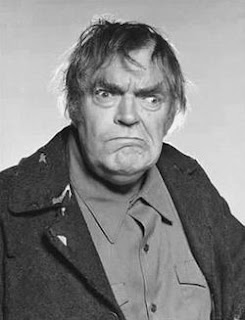 I get bouts of vertigo. Closing my eyes for a bit resolves the dizziness, but I really look forward to getting my second eye done (January 10) so I don’t have to deal with it anymore.

I almost forgot—apparently the wrinkled retinas aren’t an issue, so a second set of surgeries won’t be needed. You can bet I’m happy dancing about that!

So glad it went well and wishing you all the best for the second surgery.

Bionic eyes are the best! Like you, I was amazed at the how much detail and color had been lost over the years and the difference in the vision between the two eyes. The two weeks between surgeries were a lesson in patience, but well worth it. Best of luck with the second surgery.

Annette -- I'm happy the first surgery went well and have fingers, toes, but not eyes, crossed that your second surgery will also go splendidly.

Happy the first surgery went well and good luck on the second!

Thanks, Grace, Kait, Jim, and Liz!

Kait, two weeks, yes. I was definitely ready to have the second one done after two weeks. Unfortunately, they weren't doing surgeries over the holidays, so it's been FOUR weeks. I'm BEYOND ready now.

One down, one to go! So happy everything went well for you.

Best wishes on your next surgery. So glad the first has been a success and not too difficult to tolerate. I know the experience will inspire more writing!

Thanks, Margaret! Four days to go for my second surgery!

Thanks, Paula. Yes, I'm already pondering which resident of Vance Township is going to be diagnosed with cataracts!

Go, champ! You are an excellent role model and information source. Four days . . . wishing you all the best. <3

Glad to hear that it's so far, so good. I hope the next procedure is equally successful!

Annette, what a journey! Thanks for sharing with humor and the facts.

Thank you, Mary and Kathleen. And you're very welcome, "anonymous."