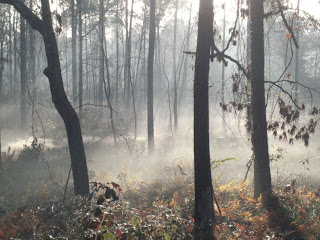 For Christmas, my family gave me a special treat—the book Dreadful Places by Aaron Mahnke, the creator of Lore, one of my favorite podcasts. I am entranced by Mahnke’s stories, spun at a molasses pace, as if he were telling tales around a midnight campfire. Every account is true…as true as ghost stories and monster stories and mysterious-killer-with-an-ax stories can be, which is to say, as true as the person telling the tale believes it to be.

His book is just as spine-tingling. Dreadful Places focuses on—you guessed it—the folklore of mysterious locations, places of heinous crimes or spectral sightings or unexplained phenomena. Mahnke quotes H. P. Lovecraft in the opening epigraph: “Searchers after horror haunt strange, far places.” And he does explore the usual points of interest on any haunted history tour: Salem, New Orleans, Civil War battlefields. But his opening essay is on a subject very close to home for me. In fact, it is home—Savannah, Georgia. And it is strange, yes, but in no way far.

I have recently moved back to Savannah full-time, having spent two decades inland, on the edge of the Lowcounty. Reacquainting myself with this expanse of marsh and wetland is an organic process; it requires getting personal with tides and mud and a backyard that reverts to its feral ways after any rainfall. I had forgotten how close this place holds its secrets, how its stories are written in blood and brack water, changing each time they are told. The darkness is thick here. It has weight and presence. And some nights, when I am alone with that darkness, I would bet that it also has sentience.

Even the crows speak a different language here, a wild trilling tongue like something out of a Tarzan movie, at least until they catch me spying on them. And then they revert right back to their ordinary caw-caw-cawing. Just us birds here, they seem to be saying. Carry on.

My series protagonist is from Savannah. Unlike me, a daughter of the flatlands, she was born in Savannah. Like the crows, she speaks a wilder language than I do. But we both share an attraction to between-places, especially those that lie between worlds. The veil is thin here in the Lowcountry, they say, and our history layered, the past and present permeable. Mahnke agrees. He says there is something in Savannah “lurking at the edges like a shadowy figure, waiting to reveal itself. Maybe it's those shady squares or the tangle of Spanish moss that hangs upon so many of the trees like the web of some unnatural spider. Savannah has just as much darkness as it does beauty.”

Savannah doesn’t feel like home. Home is supposed to be cozy and comfortable, a place to let down your guard. That's not Savannah. It doesn’t put me at ease. But it does feel fertile. Lush. Seductive. And really, what better setting could a writer ask for?

I agree with you, the veil is thin in Savannah. Enjoy your new home!

Thank you! It's good to know other people understand what I mean by that, and agree. I don't think it's necessarily a bad thing. But one must pay attention in thin places.

We lived in a house that was haunted (later featured in a book on haunted houses in Michigan) and while we didn't realize that much of the unusual happenings and feelings about the house were probably due to that, we found it to be a very comfortable place to live. I know now I probably should not have dismissed my toddler daughter's "angels" who talked to her every night as imaginary beings.

I know what you mean by veils being thin - and that just makes me want to see Savannah all the more. Plus the food....

KM, that is a fascinating story. I have never lived in a haunted house (well, that I know of) and I'm not particularly sensitive to such things. Kids are, though, as your story demonstrates. My daughter had a conversation with a ghost, only we didn't realize the woman she'd been chatting with in the back room had been long dead.

Shari, you know you've got a tour guide and dinner companion should you ever make it to Savannah! Which I hope you do.

Oh, how wonderful. NOLA has that effect on me, parts of Charleston, and Key West. All the too quiet places in the world. You've just added Savannah to my bucket list, not downtown, but out in the bayou.

Savannah will welcome you, I am sure! It has many places where you can feel the edge of some other invisible place.

Five stories of five people who struggle to survive on the fringes of society. - Jerry, a homeless veteran with PTS who doesn’t need more trouble in the form of drug dealers who think he may have witnessed a murder, or an injured stray dog he drags out of the rain into his ragged shelter... or a demon.