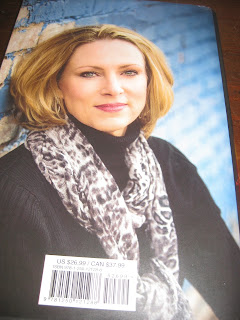 One of my favorite authors is Linda Castillo. I first learned of her when Amanda Flower, a member of Northeast Ohio Sisters in Crime Chapter interviewed her at the library Amanda works at.  I found Linda Castillo fascinating because she writes an Amish series and had met a lot of Amish people in Holmes County near where she lives. Since I have Amish who live near me and have enjoyed other books with the Amish in them. too, I bought the first three books in her series: SWORN TO SILENCE, PRAY FOR SILENCE and BREAKING SILENCE. I now have more than ten of her books.

The main character is Kate Burkholder who was born Amish but left them when she went to collage and ended up being a police officer briefly in Columbus before she returned to her home town Painters Mill when her father died. Eventually she was hired as the police chief of Painters Mill. The other main character was John Tomasettia who was sent to Painters Mill to help Kate solve the murder of a family of seven.

Both Kate and John have backgrounds that worries them. Kate had been attacked when she was a teenager, while John's wife and two young daughters had been murdered and he'd tracked down the murder and killed him. His superiors are sure he's the one who killed the guy, but they didn't have any evidence of it.

Although they take some time getting used to each other with each book they become closer and closer so we not only have some thrilling mysteries with Kate often being in danger, but the two of them falling in love even though Kate has never even had a boyfriend so both of them are not too sure of how the other one feels. Tomesetti gets upset with her often because he feels she's not being careful enough.

Have you read any of Linda Castillo's Amish series?
Would you like to read them?
Posted by Gloria Alden at 12:00 AM

I haven't read any of these, but they do sound interesting.

How exciting that you met Linda Castillo! I've read her books and like them very much.

I've not heard of Linda Castillo. Her books sound interesting. I would definitely pick up one up. Thank you, Gloria for introducing me to a new (to me) author.

Kathleen, they are very interesting. It's why I'm rereading them.

Margaret, I'm glad you read them, too.

Tina, they are fascinating. Even when I reread them I find them very interesting.

Kait, I'm sure you will really enjoy them, too. I'm enjoying rereading them, too.

Warren, it is. I particularly like the Amish element to it, too, as well as the characters, and the female police chief.

Thanks for letting us know about her!

E.B. I know you'll love her books if you ever start to read them. I especially like that the main character is a female police chief and her male officers all respect and like her. I like the fact that a male officer from the BCI has come to help her and they fall in love although it only gradually happens as the books progress. Both of them have a background that hurts and worries them.