I have seen the future – They were right, by Kait Carson 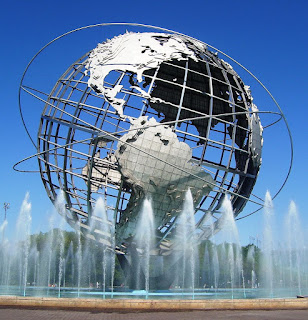 The future is a funny thing. You can miss it if you’re not paying attention. Maybe that’s because by the time it happens it isn’t the future anymore. It’s evolved around us and it doesn’t seem quite as bizarre, or even as futuristic, as it sounded way back when.

What was your first foray into the future? Mine was at the 1964 Worlds’ Fair in the ATT/Bell Pavilion. Bell Laboratories unveiled the Picturephone. The recollection that I have of it is different to what I have read. I’m not sure if the reality evolved over the course of the Fair or if it’s one of those cases of memory trumps reality. I remember that Picturephones were set up in futuristic phone booths. Two callers entered the booths and each caller saw the other on the screen. The phones looked like a business phone with push buttons which were considered posh since most home phones were rotary dial in those days, and the screen was oval like a Jetson house. Research suggests the calls were completed in Disneyland, not between booths in New York. If that’s so, then someone teleported my best friend Bernie. Now THAT’S advanced technology and no one is talking about it even today.

I’d forgotten all about Picturephones until I read a blog that cited a New Yorker article. The article rehashed 50-year old predictions of what scientists and engineers expected to be commonplace in 2018. One of those things was the Picturephone. It seems Bell was quite serious about the 1964 technology and hopeful to have it in common usage in the 1970s. Bell’s timeline was off, but it’s undeniable that the seeds Bell planted in 1964 at the World’s Fair have turned into Skype, FaceTime, and a multitude of other Internet face to face communication services.

How about you? Have you seen the future? Did you recognize it as it happened?
Posted by E. B. Davis at 12:00 AM

I was hoping for shoe phones, a la Maxwell smart, but I'll settle for FaceTime. What I didn't want it was the all knowing robot voice that controlled everything. Which we have now, except that her name is Alexa or Siri instead of Hal.

No robots in this house! It took me twenty minutes with customer service to reset the thermostat in the refrigerator after the clean condenser coils now started beeping.

What I notice is a major correction in our acquisition and recycling habits. Buy no plastic, use no plastic, recycle what you do use. E-books. E-magazines. Video streaming. Digital photos.

And no-pesticide gardens and organic fertilizers.

Shoe phones, those would have been fantastic. Do you think the cobbler would replace the dial as needed? What happened if you'd stepped in gum? Would it get in your ear? Hum, cell phones are a definite improvement, but I think the creator of the early banana phones was influenced by old Max! Now that you mention it, Shell Oil had a robot - it could have been a man in walking around in a gas pump, or it could have been a robot - I'll have to check that out - you could ask him anything and he would respond. I bet he was tired at the end of the day - unless he was a robot. Foreshadowing again - early Alexa or Siri.

I'm with you on household robots, Margaret. We had to hold the phone to our fridge for the technician to connect. I really hoped no one knocked at the door. How do you explain your fridge is on the phone? You are 100% correct in the buying habits. Back to the 50s, except for the digital additions!

Fun post, Kait. I was at that World's Fair--we may have crossed paths. I remember seeing exhibits that pictured cars flying over city skyscrapers. Fortunately, we haven't seen that one come true. I spent a lot of time at the Clairol booth which enabled you to see what you would look like with different hair styles and colors. I should have paid more attention to what it projected I would look like as a blonde. At the time I was a dark brunette. It's amazing how over the years my hair (with a little help) has turned blond. I saw the future there and didn't realize it.

LOL I remember that booth, Grace it was wonderful. I was a blonde, but I wanted to see myself with a flip, a real flip, not the baby fine one I had. Alas, Clairol couldn't help me, but I was ever hopeful, I could find a way to get my darker blonde hair to my favorite Clairol shade of Winter Wheat! They had a great gimmick with that booth. I bet they sold a ton.

I remember taking my grandmother to the airport to visit family in Germany, and she reminisced about transportation changes in her lifetime, from helping her father harness up the somewhat feisty horse for a trip into town to flying over the ocean.

A brother-in-law talked about the several hour flight over territory that his grandparents had traveled on foot, with a push-cart, years ago.

I look in awe at the advances in communications during my lifetime the same way they looked at advances in transportation.

I wonder what's next?

I saw the future of a phone that shows you who is calling and decided I would never get one. Imagine tumbling out of bed and the picture I would make to the caller. NO WAY

KM - so true. The transportation changes are huge. My neighbor turned 107 on Boxing Day. He remembers traveling by horse and buggy and now he drives (yep, he still does) a Toyota Prius. He's also a pilot although he no longer flies solo, he does occasionally take the yoke with an instructor present and he keeps his medical current. In a way, he's a metaphor for transportation over the century. Women's fashion changed at the same pace as transportation it seems and with the same effect of bringing greater mobility.

I hadn't thought about it, but yes, our lifetime has seen the biggest changes in communications. Did you see the YouTube of teens and the rotary dial phone? It was most likely staged, but it won't be too long before it's truth.

We are on the same page, Warren. Not something I would want to share with the world, either. Definitely too much information! I don't use Skype either.

My grandparents got a TV when I was fifteen, and I couldn't wait for my parents to get one, too, but it was at least a year before they got one. I was happy when telephones became one's you could carry in your pocket. As for the phones that show someone's picture. I don't have one that does that only shows the name of who is calling.

Going back in time when I was in first grade, I told the teacher I wanted to be a teacher and a mother. I also wanted to have a ranch in the west with at least 200 horses. The teacher and mother part came true but not the ranch with horses although I did get two horses when I was an adult married with children so some dreams came true.

There you go, Gloria, you are living the future you created as a child. That's perfect! 200 horses would have been quite a lot.