From a Fortune Teller’s Business Card by Jane Isenberg

For most of my adult life I lived in East Coast cities with large populations of immigrants —places where Jewish foods were easy to get and Yiddishisms were part of the everyday vernacular, places where being Jewish was not rare or exotic. Shortly before moving to Washington State I made sure to visit the new Tenement Museum on Manhattan’s legendary Lower East Side, once home to many of our nation’s “huddled masses.” This museum features a renovated tenement furnished with authentic artifacts. In the gift shop I spotted a facsimile of a business card found in the rubble by a construction worker. It had belonged to Dora Meltzer, a Jewish fortune teller who had lived and worked in that very building 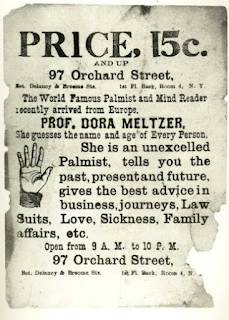 I imagined a young woman gutsy enough to defy the Orthodox rabbis who forbade fortune telling. According to them only God can predict the future. Waiting in line to pay for this souvenir, I realized that Dora must have been desperate. And smart. She’d make a great amateur sleuth. Maybe after I finished writing The Bel Barrett Mystery Series, I’d write a historical mystery about an immigrant Jewish girl living in this building telling fortunes and solving murders. I named my possible protagonist Feigele, paid for the card, and stashed it in my purse for safe keeping. I stashed Feigele behind a door in my brain.
The day after my husband and I took occupancy of our condo in a retirement community in Issaquah, Washington, a kindly new neighbor appeared at our open door. She handed me a cluster of red dahlias and glanced at the unopened boxes covering our living room floor. “Welcome! How’re you doing?”
“I’m okay. Just a little fermisht.”
“Fermisht?” What do you mean you’re fermisht?”
“Disturbed. You know, a little unhinged.”
She furrowed her brow.
“It’s a Yiddish word. Let’s see if I can find a vase for these gorgeous flowers . . . “
And so, I began my new life as a Jew in Washington where in 2003 we were few and far between. I’d been prepared for a light case of culture shock because my daughter had been living in Seattle for a decade and often called home to say, “Mom, I can’t find matzah/gefilte fish/real bagels here. Please send some.“ Even forewarned, I found my role of translator and ambassador challenging. I soon realized that I was the diversity factor in our condo community. I translated the Yiddish words that persisted in coming out of my mouth and explained the meaning of the holidays we Jews celebrate and the foods we either eat or forswear.
For a babysitting grandma writing to deadline and not an enthusiastic driver, being Jewish in Washington State could sometimes be time consuming. To attend synagogue, I had to drive at least half an hour, usually in a downpour. A bus would have taken even longer and there was no subway. To visit a new Jewish friend required a long drive too. Jews here seemed to be living in a kind of diaspora. How had this happened? Why were there so few of us here and why were we so far apart? And if there were more of us, where were they? Rumor had it that there were some Jews living on an island between Issaquah and Seattle and others in a place called Seward Park, but I’d yet to meet any of these folks.
Curious, I bought a recently published book called Family of Strangers: The Development of the Jewish Community in Washington State and written by three local scholars. I read it twice. These authors described which Jews settled in which Washington towns when and why as well as why they came and what they did after they arrived. Why hadn’t I ever read about these pioneers or seen their stories on film?
That long closed door in my brain sprung open and Feigele strode out! She brought with her an expanded story, one in which her role had changed. After leaving the Lower East Side she would come west to Seattle! There were already many well told stories of immigrant life on Manhattan’s Lower East Side. But someone had yet to fictionalize the life of Jews in Seattle’s early days. That someone would be me.
After I finished chronicling Bel’s last adventure, I began researching and writing The Bones and the Book, a WILLA award-winning historical mystery set in Seattle’s tiny Jewish community in 1965. That’s when poor Feigele’s bones were literally unearthed in Seattle’s underground streets along with her diary. In this little book my fortune teller confided her experiences as she made her way from the Ukraine to Seattle where she finally arrived during the Gold Rush. Of course, Feigele poured out her story and her secrets in Yiddish. That’s why in 1965 her diary had to be translated by Rachel Mazursky, a Seattle widow determined to figure out who murdered the intrepid diarist. Thanks to Feigele, Rachel, and Dora Meltzer , by the time I finished researching and writing The Bones and the Book, I — another transplant — had put down roots in my new home.
Bio
Jane grew up in Passaic, New Jersey, married, moved to Connecticut, and in 1962 began a teaching career that lasted forty years. The first seven prompted her to write GOING BY THE BOOK, an award-winning memoir about her experiences teaching high school English. Her next thirty-three years were spent teaching community college students in Connecticut and then New Jersey. Her first hot flash drove her to write THE "M" WORD, a comic mystery featuring a menopausal community college English prof as amateur sleuth. This book is the first of eight novels and a shorter anthologized work that make up The Bel Barrett Mystery Series. By 2003, Jane had retired and moved with her husband to the Puget Sound area. When she had written the last Bel Barrett novel, she began work on THE BONES AND THE BOOK, an award-winning historical mystery set in Seattle's Jewish community in 1965 and during the Gold Rush. Her most recent novel, MURDER IN THE MELTING POT, is another mystery, this one depicting life and death in Washington State’s diverse Yakima Valley.

Hi Jane, welcome to Writers Who Kill. What a great story and what a great discovery. I'm looking forward to reading THE BONES IN THE BOOK. Having the backstory makes me feel privy to the deepest secrets of the inciting incident. Seems we share a backstory too. Just when did they replace that wonderful (motorists would disagree) swing bridge? I'm from the other side of the river. Rutherford.

I look forward to reading Bones in the Book. Great idea, moving your protagonist to Seattle.

Jane, your journey and that of your characters is fascinating! Thank you for sharing with us. I look forward to reading your work.

Looking forward to reading this book!

Jane -- welcome to Writers Who Kill. When I moved from Jersey to the Midwest,two things became readily apparent: (1) At 6' 1/2" I was no longer one of the really tall people, and (2) If I wasn't careful, I walked up people's heels.

I can only imagine what moving to the West Coast was like.

This sounds like an incredibly interesting read. Definitely on my TBR list. Best of luck with this and all of your works.