Plotting Another Song by Warren Bull 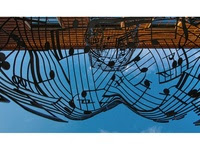 I wrote earlier about wanting to sing Don’t Get Around Much Anymore for a performance. Since the event was a “house concert,” i.e. a small performance I organized and gave to friends and family, I was able to hire a pianist I like to work with and set it up the way I wanted. I sang music by Duke Ellington, George and Ira Gershwin, some funny songs and Harold Arlen and Johnny Mercer’s One for my Baby. For the last song, I borrowed an arrangement that Frank Sinatra and his long-time pianist, Bill Miller, popularized.
For a singing competition, I was asked to prepare three musical theater songs that showed diversity in my ability to sing.
I decided upon Love Potion Number Nine by Jerry Leiber and Mike Stoller for a fun, upbeat opening. I chose If I Can’t Love Her by Alan Menken and Tim Rice because I had not been able to sing that song as well as I wanted to. I thought I needed to work on the song more and preparing for the contest might help with the ending, which I really wanted to do better.  That may sound like an odd reason to choose a song for a contest, but I wanted to stretch my singing abilities.
Because I had a bouncy funny number and a dramatic lament, I needed to find a ballad for more lyrical and understated music. I thought about songs from Alan Lerner and Frederick Lowe’s Paint Your Wagon. My first thought was They Call The Wind Mariah, which is in my range — baritone — and a song I like very much. However, it is a dramatic lament and, frankly, it has been done so many times by some many excellent singers that the judges would be mentally comparing me to singers who are better than I am.
Instead, I considered a lesser-known ballad, I Talk To The Trees. Clint Eastwood sang it in the movie version of the show. He is a baritone. However, as a baritone, he is a very good actor. It is possible that the only thing in the world I can do better than Eastwood is to sing. Almost every rendition of the song I could find online was Eastwood’s. As part of my preparation, I like to listen to different interpretations of a tune.
After some searching, I found the cast recording of a Broadway production in which Tony Bavaar sang the song. I am not a fan of misogynistic lyrics, which are rampant in show tunes. The movie version of I Talk To The Trees is more respectful of women than most songs in the genre, which is one of the reasons I liked it. The Broadway version was even more positive. However, Tony Bavaar is a tenor. Although I can sing every note of his version, I cannot sing them comfortably in a pleasant tone of voice.
My voice teacher encouraged me to combine the music from the movie and lyrics from the stage show. But that wasn’t enough. At first, I tired gestures reflecting the lyrics directly. That worked for Love Potion Number Nine but it came across as overdone for the ballad. Without gestures, my teacher said it was a pretty sounding song, but somewhat boring. She encouraged me to first identify the emotion the singer has on the refrain. Why re-sing lyrics already delivered? What emotional change does that imply?
The song starts when the singer is lonely; then he meets the girl and first shyly and more boldly tells her she makes his dreams come. There are three emotional shifts before the refrain. So, why the repeat? My teacher suggested the song could start after the singer met the girl. If she teased him about having many girlfriends before, then opening lyrics change from simple loneliness to an open expression of the loneliness he felt before, expressed to the girl who changed his life. The entire song comes together as a comprehensive story.
To me, it was like writing a short story when I know exactly what led up to the moment the reader is invited into the stream of events. The backstory never appears but it gives me, as an author, the overall sweep of what happens. Even though the reader never experiences the prequel, it provides structure for everything that follows.
Final note: I just got feedback from the judges.  One judge commented on the clear differences between the opening and later sections of the song. Another wrote a note, “Good storytelling.” So apparently the plotting worked.

Congratulations on your project and learning a writing lesson at the same time.

I like your integrated approach to artistic expression in music and creative writing.