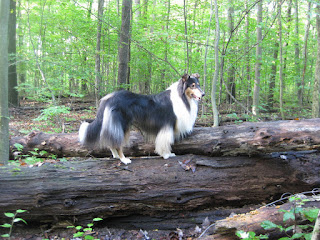 I'm a mystery writer. I murder people albeit only on the written page. I'm somewhere around forty victims now including both books and short stories. The protagonist in my Catherine Jewell mystery series so far has found at least six bodies. Actually maybe more. She's beginning to feel like she's a jinx to her town.
Although at my age I've confronted death, I had never discovered a body. That is until four years ago.

It began as a normal morning. I went out to feed and water my two ponies, and six hens and put the ponies out to pasture. As always, my collie Maggie was with me most of the time. However this morning she went out beyond the barn and kept barking towards the woods. I checked and couldn't see anything and wondered if a hunter was out there. I headed for my morning walk in the woods where I go past my son and daughter-in-law's house and continue my trail making a sizeable loops giving me a good half hour's exercise. When we'd been walking a while and started heading towards the back of my woods, Maggie started barking again. I thought maybe it was a squirrel except she didn't take off like she does when she spies one. When we'd been walking awhile we stopped at a log where Maggie always jumps up for a treat. We always linger awhile at that spot. When I started on, Maggie headed north with her nose to the ground which wasn't unusual for her, and I walked on until  I saw him. It was a man crouched in a strange posture on his toes with his knees bent and his arms slightly out to his sides.

I thought maybe it was the man I saw several years ago dressed in camouflage with a rifle across his lap. I had challenged him and told him to get out of my woods because my dog and I walk there every morning.   He said he knew that, but I had a different dog now.  He was gone when I went back that way.

Now I wondered if he was the same man. So I yelled at him and told him to get out of my woods. Then I noticed a thin wire around his neck going up to a branch above him. I thought maybe someone was playing a trick on me. Then I thought someone had hung a dummy there. But on closer look I could see he looked too real to be a dummy. My final parting shout was that I was going to call  the police. He never moved his eyes.

I knocked on my daughter-in-law's back door and when she answered I told her what I'd seen. She dialed 911 and gave me her phone. I told the responder what I'd seen and then babbled on that I thought it might be a  prank to spook me because I was a mystery writer. He got the address of where I was and told us to wait outside for the police to come.

After a while a sheriff's deputy arrived and I told him what I'd seen. Then a fire truck with two women arrived followed by an all-terrain vehicle with two young men. I told them the paths were too narrow for it to go in. While my daughter-in-law looked for boots for the deputy because he didn't want to get his shoes dirty, I took Maggie home before I returned to lead everyone into the woods on the shortest path leading to the body while the deputy and fire men and women fanned out checking for clues, I guess. I figured out the man had rigor mortise set in.

So I got to watch a real crime scene investigation. Sort of. There was only one police officer there and when he got on the phone with another one, he had me go out and meet him to give him a statement while the others got ready to cut the body down because the other officer didn't want to come in the woods and get his shoes dirty either.

I gave my statement to the other officer. He seemed rather amused when I told him I thought it was a prank at first because I was a mystery writer. Anyway, he wanted my name, address and identification. Identification? A rather small woman like me murdering and hanging a man in the woods?

Later that afternoon I walked over to see if my daughter-in-law had learned anything new and found out he lived on a side street with back yards that butted up against my woods. While we were talking a car drove in and two women got out. One was the wife of the man who committed suicide although she thought maybe he'd been murdered because his yellow car was missing. The other woman was her mother. I found out he was only 37 years old and they'd been together for six years. She wanted us to take her to where he'd been found and we refused. She told us they'd been together for six years and married for three years and that he had two children and her three young daughters called him daddy. Then she asked me if I'd like to have her four month old German Shepherd. I said no.

Was I traumatized by this? Not seriously for several reasons. One I've dealt with the death of loved ones. I held my son when he died at only seventeen years old. I was with my brother when he died, and was also present when my daughter gave permission for her six-year old brain-dead daughter's life support to be removed. I've been to many funerals in my life time. Another reason is that I talked to so many people that afternoon and evening on the phone, and weird as it seems, we were laughing. Not at the poor man's death, of course, but of my yelling at him before I fully realized he was dead, and over the irony that a mystery writer would actually find a body hanging in the woods.

Several evenings later his two sons showed up at my door and wanted to talk to me. They told me they hated the woman he was with because she'd started their father on heroin. I could tell they were really grieving for him

Did I stop walking in my woods? No! The next day I walked again, but that time I took six daffodil bulbs I dug up that morning, a garden trowel and gardening gloves. When I got to that spot, I planted the daffodils, said a prayer for him, and picked up the half full bottle of water he'd left behind and took it home to recycle and a piece of cellophane. Strange that the deputy never picked it up as possible evidence, isn't it?

The death of any loved one is a tragedy, and I think suicide must be the worse way for loved ones to deal with. We who write or only read mysteries don't always think about the suffering the families of real victims go through.

Have you ever discovered a body?  How do you think it would affect you if you did?

Gloria, how awful for you. Did you avoid that area of the woods afterwards? And did Maggie try to check it every day?

Oh, so sad, Gloria. What a lovely gesture to plant the daffodils.

How creepy! But, as you say, how appropriate for a mystery writer.

Planting the daffodils was a lovely gesture.

Margaret actually I didn't. It was on the trail I took each day. I don't think Maggie ever thought about it after he was gone. Actually she wasn't with me when I saw the body and was in my house when the officers came to check it out.

Kait when I talked to his two children who came to my house to talk to me a few evenings later and told me what a good father he was, I thought planting daffodils would be something good to do.

Kathleen, it was a little creepy, but not so much that it kept me from walking there each day. Also as I mentioned, I dealt with losing people I loved like holding my son in my arms as he died, and being with my brother when he died. Also, I was with my best friend the afternoon before she died that evening.