Like most families, we have traditions for the winter holidays we cherish. We are also open to new adventures, some of which don’t turn out quite as we expect them to.

The first holiday event on our calendar this year was a dinner to be held at a nearby restaurant by a club to which my husband belongs. I haven’t yet figured out exactly how it came about, but somehow we were responsible for supplying the pre-dinner snacks and drinks, with the club reimbursing us for the expenses. Although he won’t admit it, I suspect Steve was in the restroom when the assignments were given out and couldn't object.
Working with a list of conflicting expectations from several people, we inventoried the existing supplies (mostly of an alcoholic nature) and tried to estimate what else we would need. It’s hard to reconcile the demand for “NO MORE PRETZELS!!!!” with the note that “Everybody loved those peanut buttery pretzel thingies; get a lot of them.” And “Get real hunks of cheese, not those hokey cheese spreads” with “Make sure you have lots of that spreadable pumpkin spice flavored cheese.” Somebody even requested pickled beets.
The requests even went into specific brands of alcohol. The person who handled this task at the 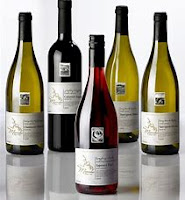 monthly meetings told us to save the bottles of the expensive brands. He refilled them with less costly alternatives as they emptied. He gave us the entire collection, and sure enough, the bottles from the expensive brands were open but full, while the cheaper ones were partially empty. He advised us not to even bring the cheaper bottles. And warned us that there was one person who liked vodka but would insist that vodka does not come in blue bottles, so that must be a fake.

Be sure to get four different types of wine, which of course can’t be kept from one meeting to another if it’s been opened.
And bring two types of beer. Nobody ever drank the beer, but people complained if there isn’t any.
We spent an entire day shopping, buying disposable plastic “glasses” and related items, trying to find reasonably priced snacks, etc. Then we moved on to dredging up appropriate serving platters and bowls from our eccentric collection. Next came all the chopping, slicing, preparing and arranging the food. Our refrigerator was packed, with some of our own food placed in a cooler outside in the hopes it would be okay for a little while.
I decided to try out one of the nifty little plastic glasses we found at the dollar store. They were actually stem glasses, coming in a stack of five with a base that attaches when they were unpacked. 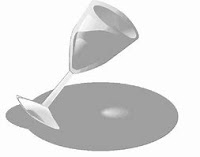 The base would not stay on the glass. I put the glass on the base and pressed gently. I rammed them together. I twisted them in the hopes that friction would hold them together. No matter what I did, as soon as I picked up the glass, the base fell off.
Well, what should I really expect from dollar store plastic glasses?
If we weren’t going to end up with lots of people trying to put down unstable glasses with a stem but no base, we needed different ones. Since we live in a rural area, that entailed a lengthy drive. We tried to figure out the quickest way to get them. The nearest possible store was about a twenty-minute drive southwest, but if they didn’t have enough, there were no other stores to try in the area. We could go forty minutes north with three possible sources, or an hour east, to the largest shopping area around, where we could be pretty well assured of finding them.
Time was running short. We settled for the nearest one, and came home with an interesting variety of clear glasses, foam cups and red ones. They would have to do.
I packed some of the food carefully in a big wheeled cooler and asked Steve to take it out the car. It might have been easier to transport all this if we still had the 23-year-old pickup truck we’d just sold, but it was beginning to drizzle a bit, so the car might be a better option anyhow.
A few minutes later, he came back in and asked if I wanted it on the back seat or in the trunk. I looked out the window. He had pulled it out to the car, then stood it up on end while he came in to ask. Needless to say, all the carefully arranged platters and bowls were totally upended.
The cooler had to come back inside. When I opened the top to see how much damage needed to be repaired, I immediately regretted having included the bowl of pickled beets.
We sorted, washed and repacked everything we could. A few things had a distinctive dark red tinge, but most of it was salvageable.
When everything was finally stowed in the car, I went upstairs to see if I could get the red stains off my hands. And get dressed.
The phone rang.
The drizzle was predicted to turn to sleet. The back-country roads might get icy and treacherous. A number of the club members were older and didn’t like to drive at night under the best of circumstances. After consulting with the restaurant, the club president had decided to cancel the dinner.
I looked out the window at the wet and gathering darkness. Since it was going to be cold, could we possibly leave most of the food and beverage out in the car overnight? When was the dinner rescheduled?
Well, a lot of the older members had stuck around just for the dinner and actually had plans to leave immediately for points south. And a contingent of the retired folks had gotten together to go on a cruise leaving tomorrow. Not that many people would still be around. So we’d hold off having the dinner until next year came around.
I’m still trying to decide what we should submit for reimbursement. The alcohol, certainly, which

can be kept for the next meeting. And we can use most of the food for other holiday occasions, so it wouldn’t be fair to ask the club to pay for that.

Meanwhile, I’m drinking inferior vodka from the blue bottle, and eating those peanut buttery pretzel thingies. Would anyone like some spreadable pumpkin spice flavored cheese? It does have an interesting distinctive reddish color, but it tastes fine. Or how about some pickled beets?

Thanks for the early morning laugh, KM. All I can add is better you than me, and next time tell Steve to wear Depends.

Kathleen, this is so funny--but sad that you had to go to so much trouble for nothing. Those pickled eggs should last forever. Invite your friends and neighbors over for an impromptu party.

Jim, sometimes things happen and you may as well laugh as cry about them.

Margaret, next year we will tell them we had already took our turn, and somebody else can do it.

Grace, we did use almost all of the food. The beverages and most of the paper products can be passed on. Although would you like some nifty plastic stem glasses?

Oh, no! Tell your husband, next year stay in that seat! What a story. Sounds like it all worked out in the long run and you'll have enough nibbles for a good long while. Happy New Year to you and Steven.

No thanks, KM. But you are a wonderful wife!

Thanks, Kait. It did work out in the long run, and if this is the worst thig that happens to us, we're in very good shape.

We've been married for over 40 years, E.B, and it's too late to abandon each other now!