Killer Nashville, formerly held in August and now scheduled in October, bills itself as “A Place for Thriller, Suspense, Mystery Writers and Literature Lovers” and offers the array of talent found at Malice Domestic and Bouchercon along with a sincere effort to provide writers with the skills, knowledge, and contacts to progress in the writing business.

This year, I learned a great deal from the two panels I moderated.

“Ask an Attorney: Belly up to the Bar and Ask your Questions about Legal Procedure” featured Douglas Jones, Robert Rotstein, and Michael Rubin as panelists. Our topics included courtroom procedure, copyright, defamation, and planning for your literary estate.

In “Double-Duty Dialogue: How to Write Dialogue That’s More Than Just Talk,” Earl G. Fisher, Linda Fisher, Rae James, Joseph Terrell, and I launched into a rousing discussion with our audience about what to include and exclude from dialogue exchanges, and how to use dialogue for multiple purposes, particularly advancing plot and developing character.

A special reason that I attended this year’s Killer Nashville was the launch of its first anthology, Killer Nashville Noir: Cold-Blooded. When Robert Dugoni was approached to contribute a “southern” story, he kindly asked a mere novice he met at the South Carolina Book Festival to collaborate and help make the story authentic. Through his generosity, I received not only a personalized master class, but also a writing credit with a New York Times bestselling author in a collection featuring notables of the mystery, suspense, and thriller genres. Our story, “A Matter of Honor,” takes place in the South Carolina Statehouse and has agent B.A. Azevedo investigating the murder of a legislative aide who may have been killed by a senator’s daughter.

Clay Stafford, founder of Killer Nashville as well as editor and contributor to the anthology, said his intention was to gather together a group of good stories. I believe he met his goal. Each tale captures the imagination with intricate plots, diverse characters, and fascinating settings. It’s a great honor to be part of this collection. 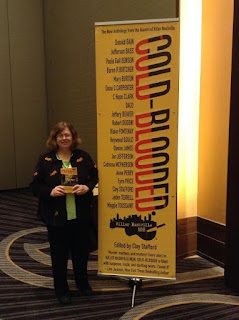 Here are just a few tidbits to peak your curiosity about the other stories:

Jefferson Bass’ “In Plain Sight” -- The writing team of Jon Jefferson and Dr. Bill Bass speculate on how an extra body might find its way onto the University of Tennessee’s renowned Body Farm.

Catriona McPherson’s “Kissin’ Don’t Kill” -- An elderly widow’s final goodbye to her husband may not be as grief-stricken as it appears.

Baron R. Britcher’s “Ripple” -- A former LA cop living in Hawaii helps his buddy, an ex-Seal and current NSA officer, recover evidence of State secrets, including a manuscript hidden by a boy being pursued by murderous agents.
Donald Bain’s “The Hunt for ‘Skippy’ Walker” -- Can a defendant be exonerated for a murder committed by his imaginary friend?

C. Hope Clark’s “Rich Talk” -- While a defense attorney tries to figure out how to deal with his cheating wife and law partner, his butler carries out instructions to the letter.
Jonathan Stone’s “Mailman” -- George Waite reacts as only a mailman can to a mysterious new neighbor in the community where he has made deliveries for 35 years.

Jeffrey Deaver’s “Repressed” -- A professor’s discovery of his repressed memories leads to an unexpected change in his life circumstances.

Jon Jefferson’s “Giving Blood” -- A grieving widower finds that his habit of donating blood might be the perfect means of extracting revenge.

Anne Perry’s “Shutter Speed” -- After WWI, a female photographer aiming for pictures of Wallis Simpson could have captured the image of a killer in a nighttime brawl with a peace group.

Heywood Gould’s “He’ll Kill Again” -- A janitor tries to warn a police officer about a serial killer. Will the officer listen?

Dana Chamblee Carpenter’s “Lullabies and Lightning Storms” -- The people of Gideon, a small town, are both attracted to and repelled by a bubble girl who tells their futures through song lyrics.

Mary Burton’s “The Keepsake” -- A cold case is resolved through forensic evidence in the Nashville bar where the murder took place.

Jaden Terrell’s “Peace, Sometimes” -- On a visit to a psychiatrist’s office, a convicted rapist and murderer escapes with his new lawyer as hostage. Or, is that only how it seems?

Eyre Price’s “Sad Like a Country Song” -- When a struggling country artist kills for what he knows to be the perfect song, he learns he’s intruded upon a deal made by the devil.

Steven James’ “Second Thoughts” -- A boyfriend seeking revenge for his girlfriend’s rape begins to wonder if his victims deserve his vengeance.

Daco’s “The Virgo Affair” -- When Agent Jordan Jakes is assigned to get close to an inventor who owns a DC bar, she finds the situation complicated and potentially lethal.

I hope you might check out Killer Nashville Noir: Cold-Blooded. Haven’t you been looking for a few really good short stories? What other short story anthologies would you recommend?

Thank you, Paula, for your post about Killer Nashville. It sounds like a terrific conference. I wish I could have been there. The anthology certainly has a lot of talented contributors.

Sounds like a great conference. Definitely something to put on my writer's bucket list. And besides, what could be bad in Nashville? It's a fun town.

It's a great conference. I have attended twice. And the anthology sounds very interesting.

Sounds like a great experience! I've seen panels you've moderated, and you do a wonderful job, keeping them moving and interesting.

I'm going to have to get the anthology.

It was a terrific conference, and like so many of the good ones, the multiple tracks and number of topnotch informative offerings made it impossible to attend everything that held my interest. Thank you Paula for this post that fills me in so well on some of what I missed. You really hit the jackpot with this anthology. What an excellent lineup of great, big-name writers. Your name is definitely going to be out there! Congratulations.

Thanks for the round-up here about your panels at the conference--and congratulations on your story in the anthology! Such fun hearing about how the story came to be--and about the other tales in the collection. Looking forward to it!
Art

I missed Killer Nashville very much this year! Thanks for the pix and the wrap up!!

Hi PGB (I like that!)
Sounds like a great conference and a great anthology. You must have needed a week to recuperate afterwards.

It was indeed a fun conference. The best one out of the three I've attended. You do a great job on a panel, too, Paula. Enjoyed sharing one with you and seeing you in action.

Paula, congratulations on getting in that anthology. It sounds like a good one. I've always considered going to Killer Nashville, but I'm limited on the number of conferences I can attend, and that one is a little too far for me to drive to attend. Maybe some day.

Grace, thank you. It was a terrific conference. I'm very proud to be included in the anthology.

Warren, I missed seeing you this year. Congratulations on your stories appearing in Strange Mysteries 6 and the Flash Bang Mysteries anthology.

KM, how kind. Thank you for your wonderful support.

Sasscer, one of the best parts of Killer Nashville was sitting next to you as your name was announced as a runner-up for the Claymore. I know your new series will be met with major success. Congratulations and thank you for all your kindness to me.

Art, thank you. I have been truly enjoying the Bouchercon anthology, Murder Under the Oaks. The stories are first rate. But then, how could they miss with such a great editor? Not to mention your On the Road with Del and Louise, your upcoming intertwining novellas, and a story for Ellery Queen. When do you have time to sleep? Please get some rest, but keep the stories coming!

Kaye, we missed you! Robert Mangeot and Debra Goldstein had a great short story session, but I had a panel scheduled at the same time. Maybe we can reunite next year?

Shari, I think I'm still recuperating. Of course, if we could have some fried pickles, like in Raleigh, that might help!

Hope, you gave the best introduction for the anthology. It was great fun to be on the panel with you. Truly a memorable experience.

Gloria, you would love Killer Nashville. I always leave feeling invigorated about my writing.