It will come as no surprise to any author who pays attention to Amazon and their pricing that they have a strong preference for ebooks priced between $2.99 and $9.99, inclusive. For books using their KDP program and priced in that range, they pay 70% royalties to authors. They pay only 35% for books priced $10.00 or more and those under $2.99.

An independent observer of the digital marketplace might well suggest that Amazon (or any electronic retailer) should earn the same amount on any ebook sold regardless of its price. They have the same infrastructure costs for all ebooks, regardless of whether they are priced at $0.99, $5.00, or $12.99. Retailers traditionally make money as a percentage markup over cost. Yet Amazon has decided to take a whopping 65% for books priced “too high” or “too low.” They do it because with their huge market share of ebooks, they can. They also do it to vex publishers and attempt to sway them to their beliefs about the book market.

Amazon not only sells books; it is a publisher with a plethora of imprints. My Ant Farm is published by one of the imprints, Kindle Press. Kindle Press is an ebook-only publisher, choosing books through the Kindle Scout nomination process. (This blog explains Kindle Scout.) Kindle Press authors range from debut to mid-list. How would Amazon choose to price these books given their contracts provide authors with 50% royalties?

Kindle Press books have been listed at $2.99, $3.49, and $3.99. The chart below demonstrates the somewhat loose relationship between price and page count. Note that sometimes Kindle Press discounts selected books to $1.99 as part of a promotion. 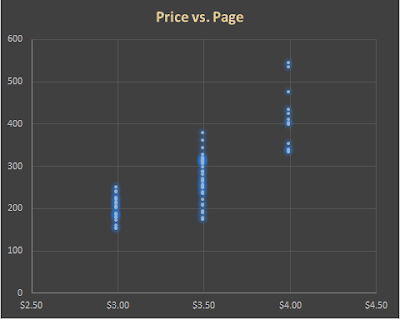 Kindle Press authors generally have low name recognition. I wondered how Amazon imprints price books for the bigger names. (All prices are from early September when I collected research for this blog.) I checked out three titles. Robert Dugoni had Her Final Breath in preorder. His previous book was an Amazon #1 seller. The Kindle book was priced at $5.99 (paperback was listed at $15.95, discounted to $11.90). The Good Neighbor by AJ Banner was the current Kindle #1 seller. Its ebook was priced at $4.99 and the paperback listed for $14.95, discounted to $8.26. PJ Parrish had She’s Not There in pre-release. The ebook was $4.99 and paperback was listed at $15.95, discounted to $11.99.

Given how long the books are, if these folks were Kindle Press authors, Dugoni’s and Parrish’s ebooks would sell for $3.99 and Banner for $2.99. The premium Amazon attaches for their better known authors based on this sample is $1.00-$2.00 over Kindle Press pricing.

What’s Happening with the Supply/Demand curve?

How did the various groups of books sell?

The supply and demand curve for ebooks is not a single curve. Readers are willing to pay a substantial premium—$10-$11—for top best sellers. Their brands apparently justify the extra cost for readers. And clearly, the Kindle Press authors do not sell as well as at least some of their other Amazon Imprint brethren, which makes pricing differences between Amazon imprints logical.

Where do relatively unknown self-published authors fit? Based on Amazon’s apparent pricing model, I speculate that $2.99 might be a reasonable price. It’s the lowest price that still provides the author with a 70% take, yet it is still probably low enough for readers who have somehow found the book to make an impulse purchase.

Indie authors, I’m curious: at what price do you list your books, and what is your reasoning?

Thanks for another blog taking a number-based approach to writing. It seems to me that Untreed Reads and other publishers of ebooks have a similar pricing range. Amazon may set the standard or it may be that in the ebook universe operates best at a different level than the print universe. I don't know enough to speculate about audio books.

Thanks for your research, Jim. It's interesting to all of us who are interested in selling books on Amazon.

I certainly don't have the answer to what makes one book popular and another, equally well written and interesting, not so much. I know part of it is the big name authors, but what goes into making one author achieve that success is a mystery to me.

I do remember when Amazon was first being developed, one of the strong points being made was that books would be readily available to everyone, and that no e-book would ever have to cost more than $10.00. The big publishers fought that one tooth and nail.

But it may partially explain their preference for the $2.99 - $9.99 range. The less expensive ones are the equivalent of the old dime paperbacks. Since Amazon does need to recoup its costs (and it's not exactly a profitable enterprise yet) I think they need to take a higher percentage of the lowest priced books.

I have my Jesse Damon crime novels listed at $2.99. I am far from a big name (actually, far from mid-list status) and know there are lots of competing novels out there for $2.99. I don't want anyone who is thinking about buying one to feel I've priced them out of the market.

Thanks for the analysis, Jim. It's always helpful to see specific examples of how things work. I have a different concern with pricing. I wonder if there are some readers who automatically ignore a book if it's priced too low. I can envision a reader who assumes cheap books aren't worth buying. I wonder if anyone else has ever encountered this or if I'm just imagining it.

Warren -- so far, people are willing to pay much higher costs for audio books than for ebooks. That's really interesting when you think about it from two aspects: (1) the extra work is primarily the artist who reads/acts out the book, not the author who spends time "proof-listening" to the book, but that's about it. (2) the marketing costs are essentially the same for an electronic book and an audio book. Clearly buyers place a higher utility of multi-tasking and are willing to pay for it. I think I need to write a blog on this.

KM -- Amazon as a total entity is making a profit now. Much of it is coming from its Prime Membership fees and its cloud storage services. It's profit margins are still low, but I still think they are looking at the long game and have a very powerful money-generating machine.

Jane -- Price is interesting. Let me relate a story from my corporate days. We discovered that when we gave free seminars, we had lots of no shows and often drew lower-level employees, not the decision-makers we really wanted to attract. When we charged a fee for the very same seminar, we ended up with very few no shows (they had already paid and didn't want to lose their sunk cost) and we ended up with a much higher percentage of decision-makers. The more we charged, the more decision-makers we got.

That doesn't apply directly to book prices, but people will often download free books and never read them. If they have paid something they are much more likely to read it. I don't have anything more than a gut instinct for what happens with $0.99 books.

Jim, I buy a lot of books and have noticed that most of the trade paperbacks, which is what I publish, are priced in the $14.95 range so that's what I chose although when I sell them in person, I'll usually discount them to $10.00 to friends. For Kindle, I looked at the range that sells best according to Kindle, and therefore chose $3.99. I actually get bigger checks from the digital part of Amazon than for the print copies, but not by much. I get checks for both about the same time when I go over $100.00 in sales. Not enough to live on, but a nice little extra confirming I'm a published writer even though I'm Indie published.

Gloria -- sounds like you have a good plan in place and it's working for you.

Hi Jim, I have been put off by some e-book prices lately. Maybe sticker shocked would be a better word. $12+ for many e-books by my favorite authors is just too rich for my Kindle. Then again, I find I do buy them at that price, but when I am ready to read them. A method to their madness? If so, it works for me.

Lots of good information in this blog. And I love the tweetable!

Thanks Jim! You keep me educated and I sure appreciate it.