Judging a Book by its Cover, by Carla Damron

Like it or not, we DO judge a book by its cover.  This means that what your cover communicates can play an important role in the success of your work. I’ve been fortunate to work with publishers who allow me to offer input in cover designs, but that was not always the case.

My first novel, KEEPING SILENT, was initially released by Write Way Publishing. They sent me an image of what the cover would be. I suggested that they make the murder weapon on the cover (a statue of an angel) more abstract, as it’s portrayed in the book. They didn’t much care what I said, so the book came out with this cover. I decided that was okay. 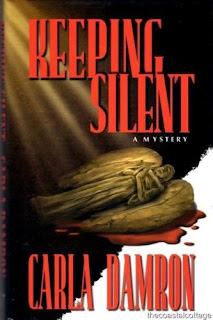 When Writeway sold the mass market rights to Harlequin, I was thrilled. My novel would appear in 30 countries! But not only did I have NO input in the cover design, I didn’t get to see it until a box of books appeared on my doorstep. With great enthusiasm, I tore through the cardboard to find this: 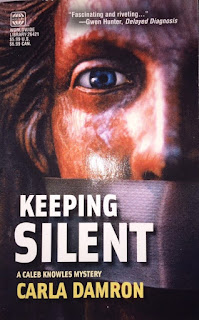 WTH? The woman on the cover looked like a burn victim with duct tape on her mouth! I’m pretty familiar with the plot, and there is no duct tape.  Nor is there a scalded woman. (The picture is actually of the sculpture, but it has a horror-story feel that misrepresents the story.)

My other Caleb Knowles novels, published by Bella Rosa Books, have engaging, relevant dust jackets. You can check them out here: http://bellarosabooks.com/titles.htm.  The editor consulted with me numerous times. He tweaked and I tweaked and we have two covers that do their job. When we re-released KEEPING SILENT as a trade paperback, we improved the cover design to reflect the presence of deaf characters. I think each of the Bella Rosa covers catch the eye of potential readers.

With my new novel, THE STONE NECKLACE, I just received the cover design. Yes, I was consulted—three options were presented and the one I chose is the one they are using. Here’s a photo of it: 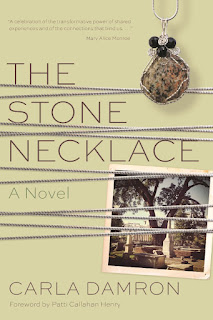 I’m very happy with this design. The stone necklace featured was designed by John Chapman, a wire-wrap jeweler, based it EXACTLY on how the piece is described in the book. The picture is of a church graveyard that is a prominent setting in the work. The chain serves several purposes: it adds tension, it brings a unique quality to the design, and it symbolizes how the lives of the various characters are linked, or woven, together.

I’d love to hear what you think. Have you had good or bad experiences with book covers?

I absolutely hate when the artists designing book covers don't read the book. Even if a reader buys the book, it feels like a rip off when the cover doesn't evoke the contents. I wouldn't have bought the book with the second cover. Did you check the sales of your books by cover? I'm sure there are more factors than just the cover when tracking sales, such as promotion and placement in the marketplace, but I would be interested in comparing which of the first two sold better.

I like the cover of The Stone Necklace. The graveyard picture could be bigger. I'm hoping that on the shelf (even if virtual) it can be seen better than on our blog. I love the necklace itself. At the beach, I've seen wrapped seashells created into earrings and necklaces. It sure appeals to me. Good luck with the book, Carla. I can't wait to read it.

I read books based on their reviews, not their covers.

I like your necklace book cover; the graveyard photo adds a dimension to what otherwise might appear to be a Nicholas Sparks-type novel.

I know that book covers are becoming more abstract. Margaret Maron's latest has a path in the woods with sunlight at the end, punctuated by a vulture. Lee Child's latest has the title and his name, slashed by two silver lines forming an X. Very Reacher.

I like your cover: clean with elements that tie nicely into your story. Absolutely wonderful that you have a quote by Alice Munroe on the front!

Thanks y'all. Covers can make me crazy. The worst are the ones with bad art. Also hate generic ones.
I think coming up with a unique design that catches the eye AND reveals something about the story is very hard. I have so much respect for graphic artists.

Once a reviewer wrote sympathetically about the cover of MURDER MANHATTAN STYLE. She noted that authors have little or no say on covers. That cover was one I had a great deal to do with. Congratulations on your continuing success.

A cover can entice or repel me, especially if I know nothing about the book, read a review, or had it recommended to me. So many times a publisher will use a cover that will make a book seem almost silly. My manuscript was rejected by a large publishing company, and afterwards I was relieved that my book wouldn't come out with one of their covers.

Covers are tricky. And they will draw me in or push me away. I had lots of input with my self-published books - my husband did the covers and they were wonderful, very photographic and drawn from scenes in the books. You can do that when you have leverage. My traditionally published books I had tweak rights, but no creative involvement. The publisher needed to set a tone for the series and that function is wonderfully performed in the cover for Death by Blue Water. I'm waiting for the cover of the second in the series and eager to see how the artist builds on the concept.

Good luck with The Stone Necklace. Even without knowing how skilled a writer you are, the cover would draw me in.

Carla, your cover design is wonderful! It evokes a lot of feeling, but very subtly, unlike the cover with the duct tape. So glad that you are happy with the cover. I cannot wait to read the story!


I like your new cover, Carla.I rarely buy a book based on the cover, however if it shows a gory scene or something like your cover with the woman on it looking like that, I probably wouldn't have bought it.

One of things about being an indie publisher, I have a say so on my covers and fortunately, I'm very happy with my covers. I get a lot of positive comments on them.

I really like your cover for The Stone Necklace.

Before anyone starts working on a book cover, go here first. http://lousybookcovers.tumblr.com/

Be sure to read the commentary that comes right after the title reposted below the cover. You won't be disappointed.