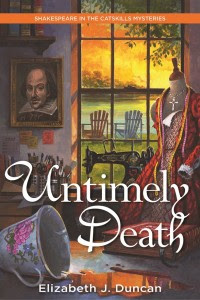 Elizabeth Duncan’s new Shakespeare in the Catskills mystery series debuted yesterday with the release of Untimely Death, the first book of this series. Those of you who read her books know that Elizabeth writes the award-winning Penny Brannigan mystery series set in North Wales. Her seventh book in this series, Murder on the Hour, will be released in April 2016.

Since I’m a fan, I wanted to read Untimely Death. I’d categorize this series as traditional with a few cozy features, such as Rupert (a Corgi), a Catskills town, which caters to tourists, and the bungalow quarters where some of the crew lives.

Main character England-born Charlotte Fairfax designs wardrobes and costumes for the theater. The action is set at the ageing and financially unstable Jacobs Grand Hotel, which stages Shakespearian plays during the summer months. Murder’s afoot on the stage and on the grounds of the hotel.

Would you give our readers a jacket copy synopsis of Untimely Death?

A Catskills resort’s production of Romeo and Juliet takes a wickedly ironic turn when the leading lady is first poisoned and then stabbed. Who would extinguish the life of such a beautiful young thespian? Who wouldn’t? Seems like everyone had a motive to pull the ropes on her final curtain call.
And when suspicion falls on her youthful assistant, costume designer Charlotte Fairfax is drawn into the investigation, against the wishes of her boyfriend, the small town’s chief of police.

Charlotte Fairfax has excellent credentials as a theater wardrobe and costume designer because she worked for the Royal Shakespeare Company at Stratford-upon-Avon before coming to the U. S. Why would she cloister herself away from mainstream theater? 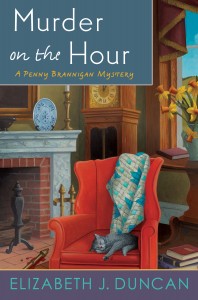 When she started working for the Catskills Shakespeare Theater Company she was going through an
emotional bad patch and it was the first and only job offered to her. Having grown up in an English village, she was happy to settle in an upstate New York town and she liked that she could continue working with Tudor and Jacobean costumes. However, she does do freelance work for New York productions and when Broadway calls, the big city is just a Trailways bus ride away.

Like Queen Elizabeth, Charlotte likes Corgis. Unlike many pets in cozies, Charlotte’s Rupert helps her find clues. Are Corgis trained for service like other breeds?

Corgis belong to the herding group and were originally used to herd cattle. Charlotte’s Rupert is modeled on a friend’s beloved Corgi of the same name.

Aside from walking Rupert, Charlotte swims for exercise. Do you?

I do! I use the time going up and down the pool to think about what will happen next in the story I’m writing. And I try to fit in at least one aqua fit class a week.

Although Charlotte uses Skype to talk with her mother, in other ways she seems like a technophobe. Is she?

Not really. She uses her laptop and cell phone. However, she does prefer to sketch with pencil and drawing pad rather than on a tablet because it’s more tactile and you can pin fabric swatches to the drawing to help you envision the look, the colours are true and it’s easier to explain your concept to the director.

You impart, through Charlotte, tasty theater-insider tidbits. What research did you conduct in writing this book?

I interviewed a Canadian costume designer who has worked with many fine companies, including the Canadian Opera Company and the Shaw Festival. I’ve attended outdoor productions in Wales of Shakespearean plays performed by the Lord Chamberlain’s Men and I’m currently taking a refresher online Shakespeare course. And I really enjoyed my visit to Mood’s and the jewelry district in Manhattan and spending several days in Woodstock, New York, admiring the Catskills. 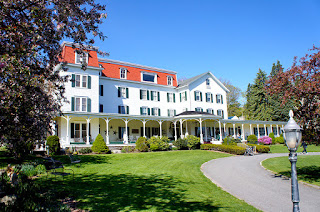 What drew you to set your book in the Catskills? Is Walkers Ridge, the town closest to the hotel, real?

When I proposed the series to the publisher, I set it in Stratford, Ontario, home of the Stratford Festival. However, the publisher asked that it be set in the Catskills. The town of Walkers Ridge is loosely based on Woodstock, New York.

Your victim is quite despicable. Do cozy readers feel better about murder victims of little character?

In a traditional mystery, the victim is generally unlikeable, so the murder somehow seems more justifiable.

Charlotte seems traditional, but she also has her quirks. Is it the artist in Charlotte that every so often compels her to act out of character?

Most of us think we know how we would act in a certain situation, but until we are tested, we don’t really know. For reasons that sometimes surprise us, in the right circumstances and in the heat of the moment, we might behave in a way that makes us later ask ourselves, “What the hell was I thinking?” Charlotte does behave somewhat impulsively on occasion, as do we all. Sometimes it works out well, and sometimes it doesn’t.

I was surprised Walkers Ridge Chief of Police and Charlotte’s boyfriend, Ray Nicholson, so readily gave up the murder investigation to the State. Doesn’t he have an ego about his work?

It’s not about his ego … it’s what he is required to do. In New York state, misdemeanor crimes may be investigated by local police but felony crimes, which include serious crimes like murder, kidnapping, money laundering, extortion and animal abuse, are always investigated by state authorities who have the facilities and training to conduct a proper investigation that will stand up in court.

The Jacobs Grand Hotel is run by Harvey Jacobs, the third generation owner. Is Harvey penny-wise and dollar stupid?

Harvey inherited a struggling business in difficult economic times and has done his best to keep it going. Every summer he thinks this will be the season when things turn around, and this year, they just might! 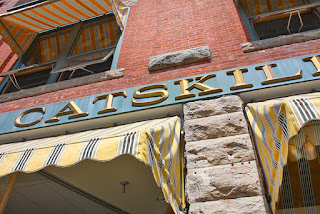 My favorite secondary character is Harvey’s nephew Aaron. As a twenty-something design student he assists Charlotte and director, Simon Dyer. Aaron is a real-life mix of youthful impertinence mixed with inexperience, but he possesses fresh ideas. Is he based on anyone real? Will Aaron go back to school or will he continue in the series?

Until quite recently I was a college professor, so I I’m quite familiar with people Aaron’s age. I love their energy and enthusiasm. Aaron will continue in the series, and the school will come to him as Charlotte and director Simon Dyer create a theater school.

Are Americans more gobsmacked by royalty than Brits?

I think so. In Britain, royalty is just there, although there is a deep affection for the Queen and quite a bit of interest in the Duke and Duchess of Cambridge. British royalty holds a lot of fascination for Americans.

When did you start writing fiction, Elizabeth?

I started writing fiction in 2005 with the work that became The Cold Light of Mourning, published in 2008.

Do you have any advice for unpublished writers?

When your work is as good as you can make it, enter it in writing competitions for unpublished authors.

Are you a beach or a mountain person?

Mountain, definitely. I never know what I’m supposed to do at the beach and I hate when all that sand gets in my clothes. And I look so much better in mountain gear. 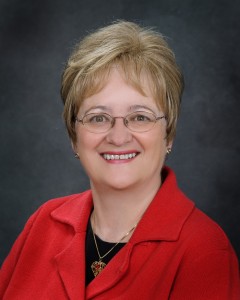 Thanks, Elizabeth, for the description of your series. It sounds intriguing. I love books where I learn something new, and reading a mystery involving the theater and costume design got my interest. I'm sorry that your editor/publisher had you change the location from Stratford, Canada, to the Catskills. I for one would have enjoyed a book in a different setting than the U.S. Sometimes editors don't give readers enough credit that we will embrace a setting outside of the U.S. Good luck with your series.

Welcome to WWK, Elizabeth. My daughter and son-in-law worked for several years at a theater group in the Catskills in Ellenville, NY, and then later in her life my daughter ran the box office for a Shakespeare Summer Theater in the Lehigh Valley of Pennsylvania. So I have a good sense of your setting. Best wishes for success with this series.

I'm perplexed with the setting change, considering the popularity of Louise Penny's books. Traditional with cozy elements, bring it on!

Sounds like a fascinating story! We have a professional summer theater near here, The Totem Pole, which brings live performances (no Shakespeare) to the area. The setup, including the temporary staff in cramped housing, could provide a volatile setting for a mystery.

Elizabeth, I loved your other series, and I'm sure I would like this one just as much. I love mountains like the Catskills, and I loved my Shakespeare class in college, so this sounds like a series I'm looking forward to reading.

My parents took me to The Totem Pole when I was little--that--and Allenberry Playhouse, KM. Not quite the same deal as in Elizabeth's book, but yes, their actors were NYC based and had good reputations. Elizabeth's MC was enjoyable. I also liked the hotel's staff members, who I assume will be recurring characters. Thanks for the interview Elizabeth. And thank you for the Penny Brannigan series, too. Love it.

What a great series. I love that it's set in the Catskills and tips a hat to Shakespeare.