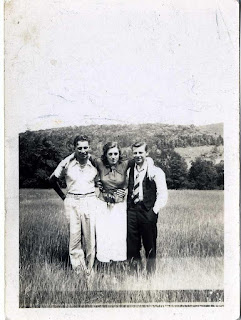 Ordinary or Extraordinary
by Warren Bull

In one week a couple who are friends of my wife and me celebrated the marriage of their granddaughter and mourned the death of the wife’s brother.  Their emotions swung from joy with a hint of sadness to grief with a touch of happy remembrance. I don’t think they got much sleep.  Judy and I joined them in their happiness and their grief.
Their family is one of those with a variety of gifts bestowed on them such as intelligence and musicality.  Other gifts they developed such as empathy and caring.  They have also worked to enhance their abilities in those gifts.   I’m not exaggerating when I say it is an honor to be friends with them.  Our friends say they are just ordinary people.  They are impressed with Judy’s academic achievements and by my writing.  We are definitely impressed by them.
Sometimes, if you take the time and pay attention, you can see the extraordinary in what is usually described as ordinary.  I sometimes enjoy walking and climbing stairs.  Part of the reason I do is because on two occasions following bone marrow transplants for multiple myeloma for about a month each time I could not do either one without going slowly and resting often.
I now recall my thirty-year-long career with a sense of satisfaction.  I had to retire because either cancer or, more likely chemotherapy, left me unable to put enough distance between my emotions and my reaction to those emotions.  When I think or hear about something sad, I fund it hard not to start crying.  I would have liked to work for about two more years but when someone is sobbing during therapy that someone should not be the therapist.  Upon reflection I recognized that I had a long career doing something that gave me personal satisfaction and validation. I have known many people who work mainly for the paycheck.  I’ve known some people who hated what they did but had to continue working to support themselves and their families.
I don’t get up each morning rejoicing that I am alive and excited about what may happen during this day.  That would be really annoying.  However, on occasion I try to see past the mundane to seek something greater.  I believe something greater is always there to be found when I really search for it.

I think periods of reflection come over most of us. Milestones in our lives bring them on. (Since I'm sort of a cyclical period, I assume that is true, but maybe it's just me!) Everyone needs to evaluate his journey to acknowledge times when we lacked strength, conviction, or spirit. I don't think the reflective journey need be one of condemnation. Simple acknowledgement is all that is necessary. There are times when we all hit a wall that can't be overcome. We fail. It's allowed. But we also have to acknowledge our times of strength, courage, and fortitude. No pat on the back is necessary in that acknowledgement either. We count our blessing and are conscious of the impediments in our journey.

Valued friends are a blessing, Warren. But then, you know that. Are they friends who will visit when you move?

As I think back over life, some of my most joyous moments have been those where I had time to stop and just be. There's a whole religion based on that concept, of course.

Great post, Warren. I think my most joyous moments have been those of sharing. It's a good life.

the holidays are looming, full of excitement and joy, and lots of memories. We're discussing moving Christmas from our home for the first time since 1984, to accommodate the recent move of one of our kids. I've been giving lots of pep talks about how to move and make Christmas in a new place. It's tough. But that's life. Nothing is forever.

EB, I hope my friends will visit. We have invited them. We can visit them in Kansas City.

It is a blessing to have good friends in our lives. The most joyous moments are truly the simplest - walking in the woods, enjoying a laugh over a cup of tea, holding a child's hand.

Warren, over my life I have suffered tragedies like the deaths of my parents, my son, a brother and a granddaughter, but overall, I think life has been very good to me. I taught third grade for 20 years, which was a great joy, even though it was hard work at time. I'm lucky with having a lot of family and friends, and so far good health, and a small farm with a woods to walk in almost every day. Like you I am an optimist, and I puddle up easily when I hear or read about something sad that has happened to others.

Warren, I agree with you that it's a real gift for us to be able to see the extraordinary within the ordinary. A poem I recently had published spoke to that, ending with the stanza:

"There was never any fall.
It was only a rumor.
Daily we walk, insensible,
through the garden."

I know leaving a career you enjoyed was difficult, but now you are going on to another chapter in your life and it is open with lots of possibilities--and more time to write.

I' too' retired before I felt ready, for health reasons. At that point, I was teaching special education in an alternative high school, an intense position that has many rewards (and disappointments.)

I just got an e-mail from a former student who tracked me down on the internet to tell me that he had just gotten a position as a research assistant in a major university-related statistical institution. When he first started in my class, he was very withdrawn (would sometimes crawl under a table & lie in a fetal position) and on probation for arson.

The gist of his email was that I taught him to believe in himself, to see that he was a valuable person who could have a future if he would work at it. He did work at it, hard. I was pleased when he got a job in a bakery, figuring that, despite his obvious intelligence, his issues might prevent him from taking advantage of them. He went on to college, however, while still working in the bakery, and is now ready to take the next step.

People, the way we feel about them and the way they make us feel, are the essence of life.

Warren,
I love your thoughts about the ordinary and extraordinary. It is my goal in life these days to see the sparkle in the ordinary–and you know, it isn't as easy as it sounds. Is it? I think it is what gets us to those extraordinary moments of resilience you speak of. Ah, life.

Lovely post, Warren. It seems I always know someone in the midst of a tragedy. Lately I know a lot of them, and have become one. But there's always light in the darkness, as you pointed out. I love the poem Linda posted here! The comments here especially thoughtful. I'm glad I made time to get over here. It's harder and harder to make time to read all the blogs I want to read. Thanks, Warren.