As I’m writing this, I’m looking forward to my favorite time of the week coming in a few hours. That is listening to A Prairie Home Companion with Garrison Keillor on Saturday nights on NPR from 6:00 to 8:00. I’ve been listening to it since the early 1980s and hate the times I’m not home to hear it. Fortunately, it comes on again Sunday mornings, but unfortunately I only get part of it because most of it is when I’m in church. 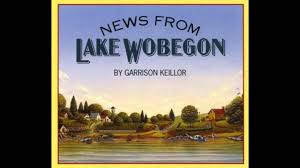 What I enjoy is his sense of humor, the skits like Guy Noir, The Lives of the Cowboys, the Ketchup Advisory Board and, maybe the funniest of all is the phone conversations between Duane and his mother played by Sue Scott. And then, of course, there’s the news from Lake Wobegon, which always starts with “It has been a quiet week in Lake Wobegon, Minnesota, my home town, the town that time forgot and the decades cannot improve upon”- a fictional small town he has created, “where all the women are strong, the men are good-looking, and all the children are above average.” Actually, he wrote a book Lake Wobegon Days, covering the whole history of this town with notations that if the reader didn’t know better, would have them believing it was a real place, even with an explanation why it doesn’t appear on maps. 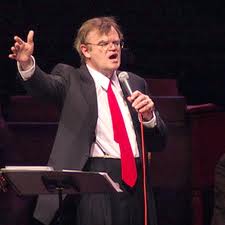 Over the years I feel I know those characters like Florian and Myrtle Krebsbach, their daughter Eloise, Senator K. Thorvaldsen, Carl Krebsbach, a carpenter, his wife Marjorie, an English teacher, their daughter Eloise, who eventually became the mayor, brothers Carl and Clarence Bunsen, who co-own Bunsen Motors, the Ford Dealership, Dorothy of the Chatterbox Café, Ralph of Ralph’s Pretty Good Grocers, where if they don’t have what you want, you don’t need it, and Wally, owner of the Sidetrack Bar. Some of the earlier characters have moved on like Father Emil from Our Lady of Perpetual Responsibility, Sister Arvonne, and some of the pastors of the Lutheran Church like Pastor Liz, who really upset some of the congregation to have a female pastor, especially when she started dating. I haven’t heard of Mr. Berge in some time, either, or Senator K. Thorvaldsen, and we rarely hear of Bertha’s Kitty Boutique anymore.
The Royal Academy of Radio Actors play different parts. They are Tim Russel, Sue Scott, and Fred Newman, who is also the excellent sound effect guy. Then there’s Rich Dworsky, the pianist and music director, who directs the small band usually joined by any guest musicians on the show. 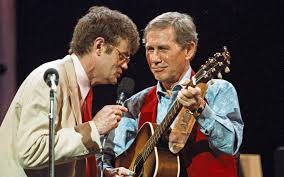 There are always musicians, some who appear on the show often, and others who are new to the show – an eclectic assortment of musicians from bluegrass groups, opera singers, country, folk, blues, and sometimes bands, like a college or a high school band and sometimes a military band. Garrison Keillor also sings. Sometimes it’s a solo, and sometimes in harmony with one of his guests and almost always at least one song with funny lines he’s written to replace those of familiar tunes. 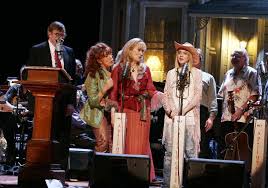 He travels around the country with his show, although most of the time it’s either in his home town of Saint Paul, or in New York City where he spends part of the winter, especially around Christmas. When he’s in NYC, his guests are often Broadway singers and actors.

I’ve been to three of his performances; one was years ago in Akron, Ohio, and two at the Blossom Music Center near Cuyahoga Falls, Ohio. At Blossom Music Center, there’s a pavilion, and the seats in there are more expensive. For the less expensive seats, people bring lawn chairs, and often food, and sit on a hillside to watch the show. My first time at Blossom, I took my sister, a niece and a nephew, all three also fans of the show. Several years later I took my best friend, who didn’t listen to Prairie Home Companion, but was always game to go wherever I suggested. Just as the show was beginning, it started to rain, and all the people in the back of the pavilion turned around and watched us. I couldn’t understand why they were looking at us poor souls getting wet instead of keeping their eyes on Garrison Keillor who was doing his monologue about Cuyahoga Falls. When I commented on it, someone near me said he’d just walked by in the audience getting wet while talking on his microphone. Eventually, when it started thundering with flashes of lightning, we all raced to the pavilion where we got seats out of the rain. 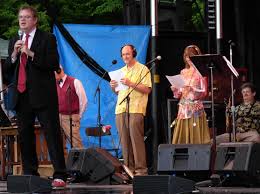 His bio from the back of his books reads: Garrison Keillor was born in Anoka, Minnesota, in 1942, and graduated from the University of Minnesota in1966 as an English major. He has been broadcasting since 1960, most of the time with Minnesota Public Radio. In 1974 he began A Prairie Home Companion, which is heard around the country on National Public Radio.  His writing has appeared in The New Yorker, The Atlantic Monthly, Los Angeles Times and other places. His daily “Writer’s Almanac” has been on the air since 1993. I get it at 6:45 a.m. and then again at 8:45 a.m. On the ten minute segment, he tells what writers or poets were born this day, as well as some other famous people, or events that happened. He finishes with a poem by a different poet each day. Keillor has also published many books. I own six of them; Lake Wobegon Days, Leaving Home; A collection of Lake Wobegon stories, Happy to be Here; Stories and comic pieces, We Are Still Married, A Christmas Blizzard, Pilgrims; a Lake Wobegon Romance, and Radio Romance, Liberty,Pontoon, and various collections of poetry he has put together and edited of well-known poets. Chicago Tribune compared his stories and books as “tributary streams running from Mark Twain and Sherwood Anderson to the Wobegonian river of stories and novels that has issued from Garrison Keillor for years.” That the man is a creative genius is my opinion of him. There have been rumors of his retirement, and he may be close to it, but I for one hope he goes on for many more years. Of course, if he does retire, all his shows will still be available online in the archives.
Have you ever listened to A Prairie Home Companion or listened to The Writers Almanac?

If you have, what do you like about it?

I too like the Lives of the Cowboys, Guy Noir. But I also like his Unitarian jokes. KB

I like all those, but Sue Scott's being Duane's mother always has me laughing, especially
the guilt trip she always puts on him to get him to go along with her wishes, and her crying.
I'm hoping if he does retire, the reruns will still be on the regular time just like all the
Car Talk shows are still on Saturday morning, and still funny.

Fun post, Gloria. I wish my imagination were as good as Garrison's. I haven't tuned into his program for years, but reading about it made me interested in hearing it again. I'll have to see if I can find his programs recorded on CD so I can listen to them at other times, especially while in my car. Thank you for reminding me what a terrific entertainer he is.

Grace, I wish my imagination was that good, too, or even half as good. You can also go to prairiehome.org/ and all his shows are in the archives where you can not only listen to them, but watch them, too.

years ago, when I was out and about in the car, I would tune in to Writer's Almanac at 11am. It was a "still point" in my crazy world, when I could listen to the poem, savor each word, hear the alliteration.

I've never really gotten into the program. My father once had a woman working for him who went to school with Garrison and said that what you see on stage is what he's like in real life. It's great he has entertained so many people for so long -- and I do find his takes on Upper Midwest mores of the Scandinavians to be spot on. :)

I don't listen to it regularly, but I do enjoy it when I hear it.

I remember one incident that brought the "all children above average" to mind.

Prior to the beginning of the school year, then-new superintendent of the large city school system for whom I worked was addressing all teachers in regional meetings. He said we should be working toward the goal of having all students achieve levels of competence above the average for the city. Not, mind you, raise the average of achievement, which would have made sense, or exceed previous years' averages, but perform above the average level for this year. I looked around to see if anyone else thought this idea might be tongue in cheek, or a joke, but aside from seeing a puzzled look on some faces, many of them math teachers, everyone, superintendent included, seemed to feel this was a realistic and perhaps reachable goal.

I grew up listening to it with my mom. There's something I love about Garrison's voice. And I've enjoyed his newspaper columns too!

I have never watched, listened to, or read anything by him. I think I must be the last person on the planet! My husband loves him and often has him on his iRadio. One day, I must at least lend an ear! Thanks for the introduction, Gloria.

I have never listened to either. Don't play the radio.

Margaret, I enjoy the Writers Almanac, not only hearing what once has happened on this day, but also the poems he recites.

Jim, I know he has a bookstore in St. Paul, but I don't know how often he's in there, but I've heard he's quite friendly when he is and meets people.

KM, I take it that maybe the superintendent listened to the program, and didn't realize the irony of what he said.

Kait, the humor and music on the program certainly brightens up my day. Of course, being a multi-tasker, sometimes I'm busy sorting through junk mail or dusting the library shelves when I'm listening to him.

Pat, I wake up to NPR and listen to it in the mornings, late afternoon and early evening, and in my car, and much of Saturday it's on while I'm in the house because there are so many good programs. I much prefer NPR to TV except for a very few PBS programs.

Great post, Gloria! A wonderful tribute to a wonderful show.

Ellen, I'm glad to hear you like it, too. It's a highlight of the day that may not have
gone well otherwise.