Life, at the Speed of... By Kait Carson

Life, at the speed of….No, even faster.

The late, great, Marshall McLuhan wrote, “We look at the present through a rear view mirror.” I’m not sure which of his books that is from, but the photograph illustrating the saying is etched in my mind. At the time, I didn’t understand what it meant. The callowness of youth demanded that the present is merely a jumping off spot for the future. Even as a history major, I didn’t see how the present was caused by looking back. I could well understand that the present was built on the past, but created by our view of the past? Nope, did not compute. This was another popular phrase in those days. McLuhan died in 1980, well before the Internet became a driving force in our lives. He would have loved it. And maybe he does. After all, he has a Twitter account @marshallmcluhan.

The events of this month brought McLuhan’s words home. November has been a month of terror. On October 31st, a Russian jet crashed in Egypt. Stories swirled through the media about the cause of the crash, each more dire than the rest. The one certainty? The plane did not fall from the sky for any of the usual tragic, but innocuous, reasons. As events developed, the cause was determined to be a bomb. A simple bomb, just as in the Lockerbie Pan Am crash. At 31,000 feet, it doesn’t take anything high tech or too complex to bring down a plane. ISIS claimed “credit” for the attack.

We’d just caught our breaths when on the 13th of November coordinated attacks killed 130 people in Paris. The world became Parisian as word of the carnage spread through the news and Internet sites. ISIS again claimed “credit” for the attack. The beautiful city of Brussels is braced for its own attack from the same source. Schools and public transportation have closed for the duration. Police and military patrol the streets in combat gear. Waiting and watching. Does it matter if the attack ever comes? It seems that in this instance terror has won without firing a shot.

Paris was still fresh on our minds when word came in on November 20th from Mali. Another terrorist
attack, this one against a luxury hotel. In this instance, the terrorists stormed the hotel and took 170 guests and staff hostage, killing 19. Al Qaeda took “credit” for this attack and current word has it that there is a deadly rift between Al Qaeda and ISIS that seems to be developing into a “my terror” is better than “your terror” rivalry. 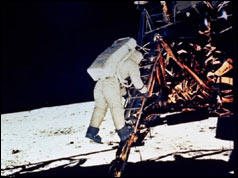 The quantity of horrific news cascading through the media made me long for a slower, simpler time. Bad things have always happened. Wars have always been hell, and yes, terror has always been with us. Somehow, though, it seemed different when it was presented to us by one of the three news networks in smaller, more easily digestible, bits. The race to get bigger, flashier, sexier coverage didn’t exist in the days of Walter Cronkite. Well, maybe it did in the newsroom, but it was more genteel when presented to the public.

In an attempt to escape the deluge of terror, my husband and I put on an old standby movie, 2000’s The Dish. The storyline follows events in Parkes, Australia during the 1969 moon landing. Those magnificent photos of Neil Armstrong walking on the moon came to us courtesy of Parkes, Australia. The movie is billed as a comedy of manners. I don’t understand why. It has some funny parts, but the underlying story is serious. At least it was to the US at the time, and to me, it happened on my birthday. Somewhere around the time of the scramble to connect to the signal from the LEM it hit. The broadcast was live around the world. It was real time, and it was universal. I could only remember one other event that took place in real time. The funeral of John F. Kennedy. The man who set us on a course for the moon before the end of the 1960s decade.
Looking at the present through the filter of those two events, I realized that the seeds, maybe not of the Internet, but of some sort of universal communication system were inevitable. The world was hooked. We wanted to see events as they happened, and inconvenient as it may be timewise, we learned it was possible.

There was another rear view mirror moment during the movie. Watching the news film of Kennedy 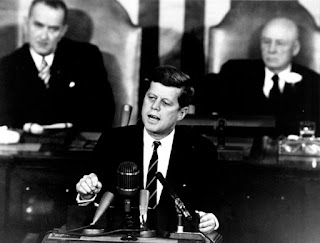 throwing down the gauntlet of space exploration and knowing how soon his life would be cut short gave me chills. Kennedy’s death was the first act of terror I could remember. An act of terror in a terror-filled decade that saw the deaths of so many from the murder of freedom riders in the South, to two Kennedy brothers, to Martin Luther King. Seeing current events in light of what went before, it’s clear. The unspeakable acts of a few terrorists can cause the world to pause. But somehow, the world finds a way to set it aside and move on. Pushing forward and growing from the pain of the past.

What about you? Do you think Marshall McLuhan was right?

Looking at the present through a rear view mirror requires the "eyes" to focus back rather than forward. In my day-to-day life, I look forward not back. I'm always looking to the future. But I understand the author's concept and, in trying to put the present in a historical perspective,we compare what has happened today to the past.

In some ways though, what is happening today doesn't have comparisons. I'm not a historian, but....there have always been religious wars. Those in the past have been tied together by territory. Even religious wars were based "somewhere." ISIS seems not to have a common geography but an ideology, infiltrating the "enemy" inside their territory. When the enemy is within it creates paranoia and destroys freedom. (I remember hiding under my desk in elementary school in case we were nuked by the Russians--like that would have helped. But it gave us a way of coping, a way to feel we were doing something.) There is no clear way to wipe ISIS out without destroying part of ourselves--which is why ISIS must be stopped. I don't understand or respect their ideology and tactics.

We allow people into our country who don't really want to be here and whose loyalty is questionable. There are too many takers in our society. We need to guard who comes into our country. I think the French "looking through the rear view mirror" might come to the same conclusion.

I remember in college when I studied for a minor in Psychology, I was attracted to the gestalt theory, which to do it complete injustice by a one-line summary, means that we arrange new knowledge to fit with our previous understanding from prior experience. A comic book illustration is the line that “when you are a hammer, everything looks like a nail.”

McLuhan’s quote seems to me to fit with this concept of gestalt theory (or at least in my gestalt, it does!). We measure everything based on our experiences and beliefs, regardless of empirical evidence to the contrary.

That's part of the reason that different groups of people can look at the same events and come to opposite conclusions about what they mean.


I think the all day, all night news broadcasts with each one trying to outdo the other, hypes up the fear of terrorism, and plays into the ISIS plan. They must be enjoying the fear so many Americans and others are feeling right now. It doesn't help that so many politicians are taking advantage of the fear. Islam is a religion of peace, but there are always those who twist it just like the Ku Klux clan, a supposedly Christian group did and to some extent still does when in the the past century targeted Jews, Catholics and Blacks. During World War II, Japanese Americans, even those born in this country, were incarcerated in prison camps and many lost their businesses and homes, all because of the fear factor. It was the same with many American Germans. After 9-11 Muslim Americans were targeted as being potential terrorists, and it's happening all over again. Look at the Oklahoma Bombing. That didn't have anything to do with Islam, or what happened. Think of Sandy Hook, or the one man who for some reason after he was welcomed into Emanuel AME church, murdered nine people in the bible study group who had welcomed him. There are always those misfits out there who for whatever their twisted reasoning causes them to kill, will continue to be there. It's always been, and it always will be, but we can only make it more miserable if in our fears we target innocent people because of their race or religion. As for me, I'm not going to obsess on what might be, but enjoy my life as it is, and hope others will relax and put away their fears of people who look or worship differently than me, and be happy that I live in a country that - except for the wackos with gun fetishes - is a relatively safe country compared to those in the Middle East.

Excellent points, Elaine. And yes, I remember life under the desk too. I also remember that we were taught if we were caught outside, to try to cover yourself with newspaper. I always wondered what that was supposed to accomplish (along with being under the desk). You've put a purpose to the actions. Yes, it gave us something to do to feel as if we were in control. Never thought of that.

I hadn't thought about ISIS having no geographic center. That is a part of what makes them so frightening. How can we effectively combat them when we can't find them. Even in the days of the Cold War, we knew where we would ultimately have to aim the guns if it came to war. Currently, we have no direction. Immigration control is a start, but it won't stop those here, or the homegrown converts. Truly, a frightening scenario.

Gloria, I agree that the overheated commentary of 24-hour news reporters add to the burden of peace, slow recovery time between incidents, and cause a sort of chicken little effect. However, it also seems to feed a copycat effect. When I was training my dog, one of the obedience teachers pointed out that to an animal, there really is no "bad" attention (not talking about animal abuse here). That the dog equates the sharp tap and strong "no-no" with the pat and the "attaboy." Seems criminals and terrorists have the same interpretation. I wish I were sure that we are safer here than in the Middle East. In many ways, I don't feel that way. But like you, I live my life with the glass half-full. Anything less would let them win!

Good point, Jim. I was actually surprised to find the quote read "present" my memory had it reading "past." In both cases, what we see is based on our experiences. Although, from that standpoint, this constant glut of communication may turn out helpful by giving us all a similar platform for experience.

We are shaped by our experiences, both actual and virtual. One curse of being human is the ability (in fact the need) to fit everything together, trying to make sense of it. Sometimes I fear there is no sense behind it.

Oh, that is so true, Kathleen. It is both a curse and a blessing, this need to make sense of everything and fit it into our own reality.