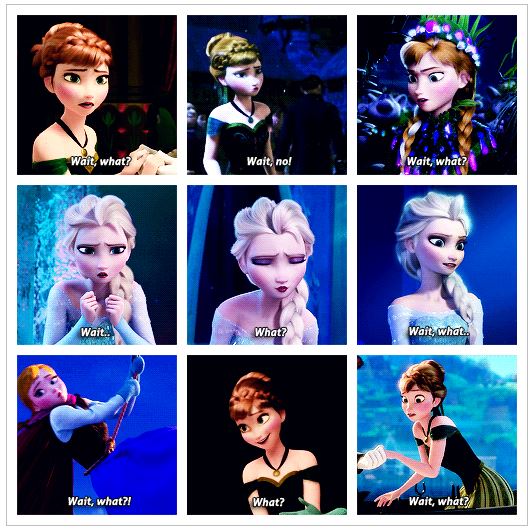 Chances are, dear readers, you have a vague idea who the two cartoon princesses are in the photo collage above. If not, a hint: Anna and Elsa, stars of Disney’s massive hit FROZEN.

FROZEN is a movie loved by many and its songs are ones you can probably hum along with even if you haven’t seen the movie or bumped into a five-year-old singing “Let it Go” at the top of her lungs in the cereal aisle at the grocery store.

But what you may not have noticed—at least I didn’t until I saw this post on Tumblr—was that Anna and Elsa haven’t done themselves many favors in critical thought department.

The above collage has the caption: “These two run a country.”

Yes, they run a tiny kingdom, but they are constantly, painfully saying, “What?” “Wait?” and combinations of those and other “I’m really confused and don’t understand what you’re saying” expressions.
Obviously, many people saw that movie and never noticed these princesses’ penchant for speaking before thinking. I sure didn’t.

BUT, fill a whole book with conversations where your character is constantly exclaiming, “Wait, what?” and you likely won’t have your reader thinking the character is nearly as smart or interesting or worthy of any sort of praise whatsoever.

Case in point: I once read a manuscript blind for someone where the main character was supposed to be this special person with knowledge that could save an empire (yes, it was dystopian). But this main character was constantly and I mean CONSTANTLY having things explained to her. She never was able to put two and two together. Even worse, it was always men in this world explaining things. Not exactly what many young girls would want to read, even though this would-be author was aiming it straight at the high school set.

After reading probably a thousand variations of “Wait, what?” I knew there was no way I was ever truly going to trust that this character could save her people or was worth any of the praise dripped on her. And I wanted to like her. I really did. But there was no way we were going to be friends. And I felt disappointed with the whole manuscript.

So, this is a challenge to you. When you’re revising, see how many times you rely on a crutch such as “Wait, what?” to get to the heart of whatever information needs to be discovered in a scene. You might surprise yourself at how easily you let your character get away with something completely against his or her character.
Posted by Sarah Henning at 12:00 AM

In an early draft of a novel my “hero” was reactive to everything – not exactly hero or heroine material. Unless we are swallowed whole by a contemporary novel where the main character just exists and we suffer with him/her, we want MCs to do something of their own volition.

In the next draft the hero stopped waiting for others to provide information and proceeded to order (or at least try to order) the world around him.

Much more satisfying for the readers. Characters need to stay in character or have a good reason for stepping out of the picture they have been painted into. Otherwise the reader is What? Wait!

I think this is similar to the difference between a victim and a survivor. A victim is one who feels sorry for himself/herself about the victimization. A survivor takes action.

One of the main story arcs of my series is the increasing realization by the protagonist that he can have some influence on what happens to him, and he is gradually becoming more proactive.

We live in a culture that celebrates individualism and sometimes underestimates how sometimes thing "just happen." Whenever I hear someone talking about a variation on the "Power of positive thinking," my reaction is, tell that to the residents of the Warsaw ghetto during WWII. Or drafted American 18 year olds caught in an ambush in Viet Nam.

When I was working in an inner city school, it became quickly apparent that many of the students saw no future for themselves. We'd have discussions about their futures, and many of them would preface their comments with, "If I grow up..."

But in our writing, we get to help establish our characters (I say "help," because my characters, at least, often won't do what I think they should) and they can have much more satisfying situations than real people.

Not having children or grandchildren, I have no idea who the characters are in the photo or where they fit in the world view of the movie (movies?). That said, I think a lot of early book writing is reactive. It's hard to let your characters take control and manipulate their situations, especially if like me, you are a pantser. It's much easier to have the characters react to things going on around them. And sometimes, that is a necessary part of the writing process. A first draft is the perfect place to discover just what your character needs to solve the mystery. The challenge of the subsequent drafts is to have your character own and use the information as he/she discovers it.

Disney--I believe they made this movie, right, Sarah?--is infamous for its female characters who fulfill the old stereotypes of femininity (helpless, dumb, pretty). I understand that this movie was supposed to be groundbreaking for them because the female leads "had agency." But really only when compared to past Disney movies--and they still fulfilled those old stereotypes as much as possible. So the stereotype of female characters that they're invested in undercut much of what they were supposedly trying to do with this movie.

Interesting take for writers is to look at which of our unconscious stereotypes are getting in the way of our characters being and doing what they need to be and do if they are to be full, complex, and living on the page.

I completely missed that when I watched Frozen. I'm curious if Disney will keep the "Wait, what?" catchphrase when Frozen 2 is released. Maybe the princesses and their dialogue will mature.

A few years ago a screenplay instructor pointed out that my main character was reactive instead of proactive. It was a good lesson that I keep in mind when I write.

Great discussion, everyone! I think you all hit it on the head with so many fine points: reactive vs. proactive; gender stereotyping; victim versus survivor mentality. It's amazing how the littlest of things (two words!) can alter the point of view of the reader/viewer so greatly!

Interesting Sarah. I had no idea, either, who those characters were. I don't think I use those words what and wait much in my books, but maybe I should check and make sure.