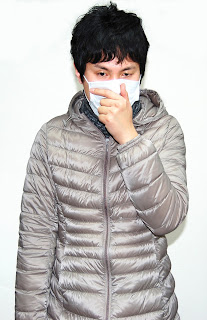 Pneumonia is defined as an infection of the lungs by bacteria, a virus or fungus. I don’t know which of the three caught me, but I know it caught me.  I have coughs of Biblical proportions.  There is the three-stage hack with each segment getting deeper in my lung.  Then there is the multiple bark which sounds like a Gatling gun, i.e. repeated rapid sound.  And, of course, the long wheeze, which is much ado about very little.

Sometimes my whooping sounds like a foreign language.  I don’t know which foreign language, but it might be a variation of German.  Sometimes the sounds sound like actual words in English.  There’s no plot yet.  I remain hopeful.

More annoying than the coughing itself, is the fact that the infection occupies a large part of my lungs. Climbing stairs leaves me gasping for air while my heart pounds like a trip hammer. Going shopping is an event that requires planning.  Where can I sit at intervals along the way?  How many tissues will I need for the phlegm, mucus and the just plain old crap that will come into my mouth? How much water should I carry?

My voice is unpredictable.  It ranges between as raspy as Bob Dylan singing to my normal dulcet tones.  When I breathe I can hear a crackling sound.  I am certain it is not due to Rice Crispies.
I am not in pain.  The major symptom beside those mentioned above is a lack of energy.  I start to feel better and then it feels like someone pulls the plug, leaving the energy to drain away.
I’m writing this in the hope that someday a character with pneumonia will pop out of my mind.  I will know how he or she feels.  I ought to get something out of this beyond a sore throat.

What problem in your life is the raw material of your writing?
Posted by Warren Bull at 12:00 AM

I can think of few things more dreadful, Warren. Concentrate on getting better. It's dangerous!

Get rid of that nasty stuff quickly!

It's a bummer. Hope you recover quickly and fully.

Once had bronchitis with these same symptoms (and they swear it was not pneumonia) for over six months. Got sick for my birthday in November, as I usually am most years, and went through rounds of antibiotics as the damn thing would get a little better and then get way worse. What got me well was the unorthodox trick of sitting on my back porch with my shirt off in the Texas heat of April and cooking it out of me. I would sit outside for an hour and two and cough bark constantly. Along with the sun tan all of that exposure basically cooked it out of me.

My doc told me later that it was what they used to do back in the days before antibiotics when they would send somebody to the country for fresh air.

You'll remember your days with zero energy, and give a character the same deep cough. I remember the endless winter I had pleurisy. Feel better, day by day.

Warren, I've never had pneumonia, but I used to suffer at least once a year from bronchitis which could have been originally caused by living with a smoker. After years of teaching, it went away, and I think it was because I built up an immunity dealing with students who came in sick because their parents didn't believe they were sick before they came to school - or didn't know what to do with them if they had to go to work. Nothing like having a student come up to you while you're sitting at your desk and say, "Mrs. Alden, I don't feel good," and then barf in front of you.

Anyway, I hope you will be feeling better soon and get the whole thing out of your system.

That sounds horrible, Warren. I hope you recover quickly!

I sympathize greatly. I'm not going to get into a battle of the who-has-it-worse, but I have also had pneumonia several times and it is exactly as you describe. [although, heads up, when you've recovered from the infection you'll still feel like you've been kicked in the ribs by a horse because I don't think we generally use those cough muscles every day]

I don't know which State you're in, but the 'solution' for me was leaving soggy Britain and coming to the twinkling, sunny climes of California. It is a cure I can heartily recommend, even for a couple of days.

Not being able to breath is a serious problem. It completely drains all your energy. Just holding your head upright seems like a task.

I've always had short-of-breath problems, but in the last few years they became serious, and the doctors kept treating it as a lung disorder, but I never got better. Finally a pulmonologist suggested I seek a second opinion with a cardiologist (I'd been seeing one, who saw nothing serious.)

Turns out I have a congenital heart defect that diverts some blood away from my lungs, and as I got older and developed an aortic aneurysm, it got worse. They put a patch in my heart & the blood can't skip the lungs. I felt better the next day.

I imagine at some point I will have a character with those symptoms, but right now, it's much too recent and vivid for me to pass it over to a fictional character.

I've had a small pneumonia (caught early...what used to be called walking pneumonia) a few times. The crackling when you breathe is beyond annoying. About the only thing you can do comfortably is lie down and read!

Feel better! I've only used my ailments in short stories. Seems once I get over something, I want it in the past!

Keep those notes for when a character gets a cold. I had a horrible cold and was visiting our son's family as I was writing the short story that got an Agatha nom. Guess what the cop, my MC had? Not only a horrible cold, but he had a very hard time even buying cough drops, poor guy. When I had shoulder surgery a character wrenched her shoulder. She didn't have surgery, but it hurt like the dickens. Same with a badly stubbed toe, etc.

I've had pneumonia in the past and it was horrible. So you have my sympathies.

Hi there very cool web site.Everyone should read.I’m glad to find so many useful information here within the
put up. For more amazing info everybody can find from this link
What Is Pneumonia