I’m still trying to figure out just how I feel about this particular event in my life. Should I talk about it or not? Hum. Oh, what the heck! It’s funny.

A couple of weeks ago, I was in Total Wine. A woman asked me if I worked there (I get that a lot, my first job was in retail. It must have marked me in some way.) and I said, “No.” Now, in the normal world, that would have been the end of it and she would have gone on to find someone who could help her. Instead, she came right around, got in my face and said, “Well, it’s that belt purse you have on. You shouldn’t wear that. It confuses people.” I thought she was finished at that point and started to walk back down the bourbon aisle. 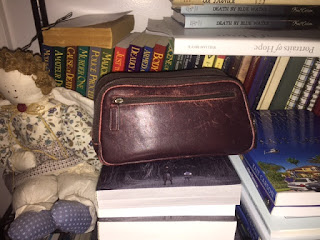 No, she came after me, and jumped in front of me again. This time she said, “I haven’t seen one of those in years, no one wears those anymore. You need to get rid of it.” Then she stalked off, apparently happy that she had educated me. To be honest, I was glad to see her go. Not because I was embarrassed, but because her attitude was a bit concerning. She was within one screech of going postal!

The offending belt purse is in fact a double glasses case that is made to loop on a belt. It’s beat up and well-loved and probably should be replaced. If I could find another. It also prevents me from getting to know the folks at DMV. Before I found these handy dandy little belt purses, I was regularly losing my handbag, and everything in it. This solves the problem nicely. My hands are free, all my essentials, including my cell phone are accounted for. I never thought of my solution as dated. I just thought of it as something that works!

How about you, has your style even been found wanting? How did you handle it?

Kait, that was so funny. It never ceases to astound me how self-righteous and judgmental people can be. As I get older, these are two things I have to work hard to conquer, but being less so really frees me to accept people the way they are.

My young adult daughters take me to task, when they're not "borrowing" my expensive running socks.

Anyone who knows me knows I am as far from a fashionista as Comcast is having good customer service. We both understand the concepts in theory, but simply don’t give a darn. I have “appropriate clothes” and wear them when necessary. However, I mostly dress for comfort and whatever is at the top of the drawer has a much higher probability of finding its way onto my body than something I have to dig for.

Ya know, sometime you have to look people in the face and just growl!

So funny! I think you've been officially accosted by someone who does not ascribe to 'live and let live.' And yes, I've had such an encounter. I was in New York, walking the streets alone in the morning during a writer's conference, looking for a gluten-free breakfast. (This was a few years ago before these options were all over the place.) To keep my curly hair from frizzing in the morning humidity, I had a baseball cap scrunched down over my hair. While waiting at one of the crosswalks for the light to change, a woman in a group of people made a nasty comment about my hat, something along the lines of "women over forty should NOT wear baseball caps." I didn't check her out; don't know what she was wearing or what she looked like. Don't know if she was a New Yorker or a tourist. I was too euphoric as I was over 50, so I felt like this boorish woman just gave me a compliment! And news flash, I'm in the next decade now. (gulp) But I still occasionally wear baseball caps on humid days (which we have a lot in MIchigan). If this is a fashion faux pas, gee, I just don't care! (Wonder if that woman would think I look over 50 now?)

Good grief! Funny thing is, I've seen belt purses in lots of catalogs. You're a trend setter! That lady did not know what she was talking about.

In addition to being the subject of your blog, perhaps the fashionista from 1983 will show up as a victim in one of your books.

I once had a stern-faced woman stop me while I was taking out the trash. She looked me up and down then asked if I was a nurse. I shook my head "no." She pointed her finger at me and said, "You dress like one. It's the sweater." Then she walked off. I'm still not sure what to make of that encounter.

I loved this blog. It's so funny. My son complains when he sees me walking by in the woods on cold mornings in the winter because I'm wearing an old snowmobile jacket that's probably close to 40 years old. I don't see that it's a problem because it's warm and no one ever sees me except the few times he's out there. My California daughter is always commenting on my clothes and how unfashionable they are and tries to get me to change, too. Like Kara, I've had more than one person approach me when I was still teaching 3rd grade and ask if I was a teacher because I dressed like one.

As for me, I dress for comfort. I hate shopping for clothes and even more so if it involves trying clothes on.

I find it interesting that some people are so sure that the way they think and what's important to them is going to be important to other people. Appearance is a prime example. I have a sister-in-law who is all about appearance. She is gorgeous and that's important to her. Fine. But she fails to see that it doesn't matter to everyone the way it matters to her. She told the husband of one of my sisters that she admired his loyalty to his family, since he stayed with his wife, my sister, even though she was getting fat. We all had a good laugh about that. Including the "fat" sister.

YIKES - I am so sorry. I had an Internet malfunction yesterday (my ISP lost the DNS - way too many initials for me, but it meant that since I work from home, I was off yesterday, and worked a full day today). Hence in my brain, today was Friday. When I finished my day - all 12 hours - I logged on to my e-mail and saw Elaine's post. My first thought, hum...wonder why Elaine is posting a day early? My second thought...OMG, today is SATURDAY! So, I totally apologize for not showing up until way late.

@ Grace, I know, me too! It also boggles my mind that people will say anything that pops in their head.
@ Margaret - teenagers are built in fashion police. And we have to know when our kids go into the teen years, that we will know nothing, until they hit 21! Amazing, isn't it.

@ Jim, me too! I have not outgrown my blue jean phase. Just too comfortable to let go.

@EB. Never thought of that. I am going to try it next time! Have you used that technique? Sounds like a lot of fun.

@ Denise, how hysterical. We women of a certain age know, what's important is not how we look. because we look comfortable. And we paid our dues to earn the right. Rock on, Denise. By the way, when my first book was released I started the tradition of having a ball cap made with the cover (get 'em at Vista Print) I have quite a collection now. And yes, I do wear them!

@ Shari, so funny. I'm glad though, mine is getting tired and I was despairing of replacing it!

@ Kara, that is hysterical! I wonder what her "thing" was about nurses. UR, yes, Mme 1983 may make it into one of my books! Some people are just too good fodder to let go of!

@ Gloria, How wonderful. I still have clothes in my closet from whenever ago because a) they are wonderfully serviceable, b) they are comfortable and do the job they were purchased for and c) they don't make them that well anymore! Comfort is my calling card. I live an active life, comfort is essential. And I love shopping on the Internet! Can't remember the last dressing room I visited. Let's hear it for technology!

@ KM OMG - ya gotta wonder what happened to the mouth governor! And good manners come to think of it. I wonder if she ever realized that what she said, said more about her than your sister.

I'm afraid I wouldn't have been very nice. She sounds like a renegade from Flashdance. Are you sure she wasn't Jennifer Beals?

Hi Polly, I was thinking about you earlier, I hadn't heard from you in a while and I wanted to touch base. Hum, she could have been Jennifer Beals! I hadn't considered that. Actually, I was speechless. My afterthoughts were not so nice.