Hoping to sweeten sales for their shop, Chocolates and Chapters, Michelle and Erica host a reception highlighting a new museum display of ancient Mayan pottery curated by Erica’s former mentor, Professor Addison Moody. The evening has a few hiccups, but the ladies soon smooth things over with ample servings of wine and chocolate.

Yet with the sweet comes the bitter. The very next day, the antiquities from the reception are discovered missing. The professor accuses Erica of having sticky fingers, claiming she wants revenge on him. And she’s only in more trouble after he’s found stabbed to death with one of the artifacts. Now Michelle must help Erica track down the real killer before someone else finds themselves in less than mint condition…

What could be better than eating chocolates and reading a good book? Perhaps becoming a national best selling author with your very first book. That’s exactly what Kathy Aarons did with Death Is Like a Box of Chocolates. In preparation for her Chocolate Covered Mystery series, Kathy subjected herself to some challenging research—tasting a lot of chocolate. As a result, she has written two deliciously entertaining books. To the delight of fans who hungrily awaited the next book in the series, Truffled to Death recently hit bookstores. Although we can’t sample the chocolates that have made these books so popular, unless we try the recipes she’s provided in her books, we can read about Kathy’s recipe for writing.
Grace Topping

Kathy, welcome to Writers Who Kill.

You gave Michelle Serrano and Erica Russell, two store owners in a small town in Maryland, quite a task—bringing down an international art trafficker. What made you highlight art trafficking, and why Maya antiquities?

The story was inspired by a trip to a local museum. I saw a small plain bowl at a History of Chocolate exhibit and, like Michelle, was entranced by the idea that it had held chocolate eight centuries ago. With a little research, I learned that the Maya drank chocolate with every meal, something Michelle would think is a great idea! I started with the idea of Michelle and Erica being suspected in the theft of the bowl, but then I learned about the criminal trafficking of Maya art and knew the book had to highlight that huge problem. Although it doesn’t get as much attention as other fine art theft, the international trafficking of Central and South American antiquities results in wide-scale looting of archeological sites all over those continents, and criminal activity much like drug cartels.

Erica is the town’s girl genius and a Fulbright scholar. Her phenomenal brain helps them in their investigations. Why did she return home to manage a bookstore?

Truffled to Death reveals some of her reasoning, but besides Erica’s love of family and her hometown, she found that the deeper she moved into her academic studies, the narrower her focus became. Erica has many interests, and her side business providing research for her academic colleagues satisfies this desire to learn more about them. She also finds great satisfaction in matching a customer with the perfect read and finding good homes for her used and rare books.

Erica’s brother, Leo, who returned from Afghanistan after losing a leg, is making progress in his fight against depression and finding happiness in his life with Star. Leo highlights the challenges facing many veterans when they return home. What inspired you to create Leo? Any chance that he will play a bigger role in this series?

I love the character of Leo! I live in San Diego, which has a large military population, so I think including a war hero grew organically from living here. A psychiatrist friend helps me to ensure that his character is authentic. Funny you should ask about Leo playing a bigger role—he is an integral part of the third book, Behind Chocolate Bars, which will be out in March 2016.

In their store, Chocolates and Chapters, Michelle makes and sells chocolates and Erica manages the bookstore side of the business. Were you into making chocolate before selecting this as a hook for your series?

Yes, but my lumpy but tasty chocolates are not the works of art that Michelle makes. I’ve learned quite a bit from a local chocolatier—Isabelle Knack of Dallmann’s Fine Chocolates—about the joy and challenges of running a chocolate shop.

You spend a lot of time writing about chocolate and testing recipes for inclusion in your book. Does this put you off chocolate, or does it tempt you to sample even more?

The only thing that puts me off chocolate is eating too much at one time. But I’ve found that chocolate is addicting. If I have chocolate at three in the afternoon one day, the next day I’m craving it right at three. For the sake of my waistline, I have to moderate how much I allow myself to eat. Luckily, I have friends and family who are happy to help me test the recipes. And I’ve been known to run down to Dallmann’s to buy chocolate for writing inspiration. 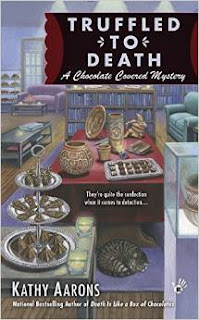 You describe some really unusual chocolate flavors, for example, butternut squash squares with cookie crumbles on top, bee pollen and fennel truffles, etc. Are these actually ones you’ve made or tasted?

Yes. If it’s in the book, I probably tasted it. Dallmann’s uses some pretty exotic flavors, and it’s a lot of fun to describe them.

Erica works with the high school to conduct a flash mob to advertise the Maya exhibit at the local museum. You’ve included details about what’s involved with putting on a flash mob, which I found interesting. Have you been involved in a flash mob production?

I haven’t been involved with a flash mob, but my daughters used to be in theater, and I volunteered quite a bit back stage. Some aspects are similar. I also talked to a local event planner who helped with the details.

You’ve given your characters some very interesting names. Michelle’s love interest is nicknamed Bean. Lots of writers find naming characters a challenge. What’s your technique for coming up with names?

Bean’s name was inspired by someone my husband knew years ago, and I always liked its unique quality. When naming important characters, I research the meanings to make sure it fits my view of them. Cozy mysteries have a large cast of characters, so with minor characters, I have to make sure I don’t have too many names that start with “C,” for example, or it’s confusing for the reader. I keep an alphabetical list by first and last name and use online baby name websites to come up with interesting ideas.

Michelle teases Detective Lockett about his way of speaking and terms he uses, which are frequently used by people from the Pittsburgh, Pennsylvania, area. I recognized them since I grew up in Central Pennsylvania. How are you so familiar with them? Could Pittsburgh be home? 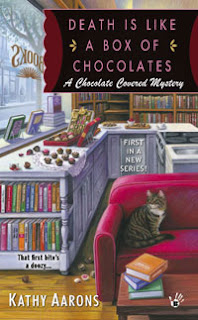 Yes. I grew up in Pittsburgh and moved north of the city as a child. I attended Mars Area High School and used to love telling people I was from Mars. Since I’ve lived in a few different areas since then, I’ve lost my Pittsburgh accent, but hearing it makes me homesick.

People who enjoy reading about pets in mysteries will be intrigued by Coco (aka Lentil) the cat, his GPS tracker, and how it helps solve the mystery.  Will Coco be a regular in your upcoming books?

Yes. I consider Coco to be another character in the series.

What adventures await Michelle and Erica?

In Behind Chocolate Bars, Michelle and Erica are drawn into another murder investigation when one of Michelle’s comic book kids becomes a suspect. With their tech guru, Zane, they learn that catfishing—pretending to be someone else online—can be deadly.

Kathy Aarons grew up in rural Pennsylvania and attended Carnegie Mellon University. She moved to New York City, where she built a career in public relations and met her husband. They now live in San Diego with their two daughters. Read more about Kathy and her many activities at http://www.kathyaarons.com.
Posted by Grace Topping at 12:00 AM

Who wouldn't want to read a mystery where the protagonists serve chocolate and wine!
This series is custom-made for success.

With a flash mob and disabled veterans, your books are certainly keeping up with the times.

I look forward to reading them.

looking forward to reading your books. Anything with chocolate in the title is a winner before the first page.

Delightful and delicious. What a stroke of genius to combine two of my favorite things, reading and chocolate. How did I miss the first book! I have to rectify that oversight right now. Great interview. Looking forward to a fun read.

Oh, how you must suffer for your art - tasting chocolates and wine - delightful!
I've gotten hooked on your series and am so glad you have number three coming out next year.

I just ordered and look forward to reading Truffled to Death!
The Maya were right--it is good to have chocolate with every meal.

It sounds like a wonderful book and series to come. I'll add it to my TBO list.

I'm so there! Save me a place at the table: wine, chocolate, books...and a little sum-sumt'ing!

Thanks so much for your nice comments!